Given that it is  Christmas, this post has a slightly festive theme. It will  explore  the development of the cult of St Nicholas and the saints’  connections with medieval Ireland. 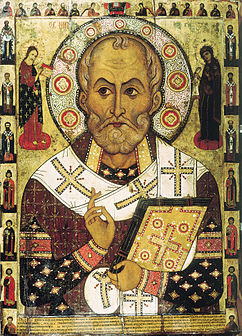 St Nicholas was born in the 4th century and following his death,  his cult developed and spread across the Christian world.  He was a very important saint and was the patron saint of  merchants, sailors, prisoners and children. Today he is venerated in both the Orthrodox and Catholic church. Over time his cult  developed into the modern Santa Clause tradition.

Map of modern day Turkey showing the territory of Lycia

St  Nicholas  was  born into a wealthy family in  Asia Minor in a place called  Patara (in the modern-day Turkey).  He became  bishop of the port town of  Myra in  the territory of Lycia.

An image of St Nicholas being carried to his burial-place (http://www.omhksea.org/2011/12/saint-nicholas-archbishop-of-myra/)

The site of his grave soon attracted pilgrims and Myra became a thriving pilgrimage destination. It is thought that the site of the saints grave is located within  the 9th century church  of St Nicholas on the outskirts of Myra. This church sits on an earlier 6th century  church which tradition holds was built over the grave of the saint. Within the present church , there is a  sarcophagus which is thought to have held the remains of the saint.

Throughout his life , St Nicholas performed many miracles and  acts of kindness. Fresco’s within the church depict scenes from the saints life, such as  healing the sick and Nicholas saving the Basileios from the Arabs.

The church of St Nicholas at Myra (http://www.sacred-destinations.com/turkey/kale-church-of-st-nicholas-myra.htm)

The church at Myra remained a place of pilgrimage  even after the remains of St. Nicholas were stolen in 1087 AD  by Italian sailor from Bari and  brought to  the port town of Bari  in Italy where they remain to this day.  Tradition holds that in their haste  the sailors left fragments of the body  in the grave and these were collected by Venetian sailors during the first crusade and  then brought to Venice. They  were then placed in a church  dedicated to the saint an  on the  Lido.  Over the centuries there was much disagreement between Bari and Venice as to who had the true relic of the saint. Interestingly  Professor of anatomy Luigi Martino at the University of Bari has examined both the remains at Bari and Venice and concluded that the fragments of bones in Venice were complementary to the bones in Bari. His investigations suggest that the bone  are from the skeleton of the same man ( http://www.stnicholascenter.org/pages/relics-in-the-lido-of-venice/ ).

Thanks to the relics of the saint,  Bari  soon became a great centre of pilgrimage.   Following the saint’s death in the 4th century his body was said to exude a clear liquid called manna or myrrh which was believed to have miraculous powers. When the skeleton was moved to Bari it continued  to exude this clear liquid which was called ‘manna of the saint’. Pilgrims believed the manna had special healing powers .  The manna was diluted and made available in bottles decorated with images of the saint. Every year  on the feast day  of the translation of St Nicholas relics to Bari   a great festival  takes place which culminates in the extraction of the manna by the rector  of the Basilica  (this you tube  link shows this  ceremony

So what of the saints connections with Ireland?

The earliest evidence for the  cult of St Nicholas  in Ireland  occurs in the Hiberno Norse town of Dublin.  In  1038, Sigtrygg Silkbeard Olafsson, king of Dublin, with the support of Dúnán the bishop of the city, founded Christ Church Cathedral, with a   chapel  dedicated to St. Nicholas (Bairéad 2010).  For a really interesting discussion on the introduction of the cult of St Nicholas to 11th century Dublin see Eoin Bairéad’s article Nicholas and Dublin  reference given below.

In the  medieval period  his cult  was found in  Gaelic and Norman communities alike.  Dedications to St Nicholas are found attached to holy wells and medieval parish churches across  the entire island of Ireland.  At present I am putting together a database of all medieval sites dedicated to the saint. Hopefully by this time next year I will be able to share more information on the distribution of the cult in Ireland.

One of the most beautiful  medieval churches dedicated to St Nicholas in Ireland is the medieval collegiate church  in Galway city.

Given the popularity of St Nicholas I see no reason why Irish pilgrims to Rome or Jerusalem would not have  visited Bari or Venice. The Via Francigena was one of the main pilgrim routes to Rome and from Rome it continued  south to the port of Bari.  Bari was also  one of the departure points for the Holy Land and the Church of the Holy Sepulcher in Jerusalem. Within Ireland local pilgrimages were made to holy wells dedicated to the saint  across the country.  I hope to discuss these pilgrimages further in another blog post.

Another likely place of pilgrimage  within Ireland is the deserted medieval town of Newtown Jerpoint Co Kilkenny. I visited   Newtown Jerpoint yesterday and had such a lovely time .  This unique site is in private ownership but it’s  owners Joe and Maeve O’Connell have opened this special place to the public. I highly recommend a visit here and if anyone is interested in visiting check out their website  www.jerpointpark.ie

Located close to the great  Cistercian  foundation of Jerpoint Abbey. The medieval town of  Newtown Jerpoint  was founded  c.1200,  shortly afterwards a church dedicated to St Nicholas was built to cater for the towns growing population.  The town fell out of use in the 17th century.  The remains of the town are   preserved today as a series of earthworks but the guided tour really makes the landscape come alive and you get a real sence of what the town was like .

Artists reconstruction of the medieval town

So what of the sites connection with pilgrimage? Although extensive records for the town’s history exist there are no  references to medieval pilgrimage  here however tentative evidence may be suggested by the  tradition that St Nicholas of Myra was buried here.  The  Newtown Jerpoint conservation plan  notes that ‘according to local legend , there had been fourteen wine-taverns among the trading establishments of Jerpoint.’  There are some who think that the large amount of taverns may have existed to cater for pilgrims. 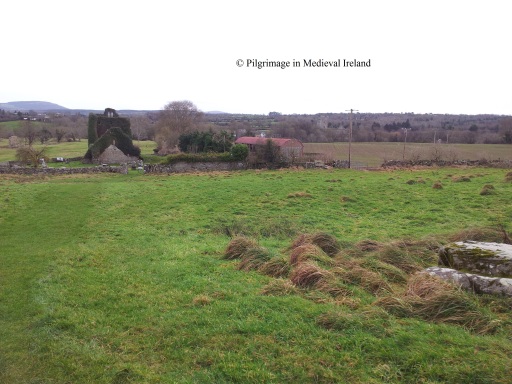 So tradition holds that St Nicholas’s grave is marked by  a large medieval  grave slab. The slab  has been dated to the early 14th century by John Hunt (1974, 197). The slab has an effigy of a cleric  dressed in a full chasuble (outermost liturgical vestment worn by clergy), his hands are raised palm-outwards on his chest. On his feet are pointed shoes. Above each shoulder are two heads  one wearing a mitre-like head-dress and the other a pill-box type head-dress.

Local tradition holds that this figure depicts  St Nicholas and the heads are two crusaders who  brought the saints remains back to Ireland.  The tale tells of a band of Irish-Norman knights from Jerpoint, traveling to the Holy Land to take part in the Crusades. On their return  home to Ireland, they seized St Nicholas’ remains, bringing them back to Kilkenny, where the bones were buried.

Another version of the story tells of a French family, the de Frainets, who removed Nicholas’ remains from  Myra to Bari , in 1169 when Bari was under the Normans. The de Frainets were crusaders to the Holy Land and also owned land in Thomastown, Ireland. After the Normans were forced out of Bari, the de Frainets moved to Nice, France, taking the relics with them. When Normans lost power in France, the Nicholas de Frainets packed up once again, moving to Ireland. This story has the relics being buried in Jerpoint in 1200.

Like all legends   there is   probably some  truth to this.  I think it is unlikely that  the  body of St Nicholas  was brought here,  if it had  such an important saint would  most certainly have been placed in an elaborate shrine (most likely within the church). However it is my opinion that the church was  in possession  of  one if not two corporeal  relics  of  St Nicholas.  Norman knights from Kilkenny  did participated in the Crusades to the Holy Land so it is possible one or two  of them brought some relics back with them.  I think that over time this   legend developed and attached itself to the near by burial slab which most likely depicts a cleric associated with the church or nearby Jerpoint abbey. Recently a second grave slab of a similar date has been uncovered at the site and  it also depicts a cleric.

Any church in the possession of  a relic (s) had the potential of attracting pilgrims  and I see no reason why pilgrims would not have come here  to pray to St Nicholas.  A  holy well located a short distance from the church,  also   dedicated to St Nicholas  was another possible point of devotion and there was a tradition that the  water was a cure for skin complaints. 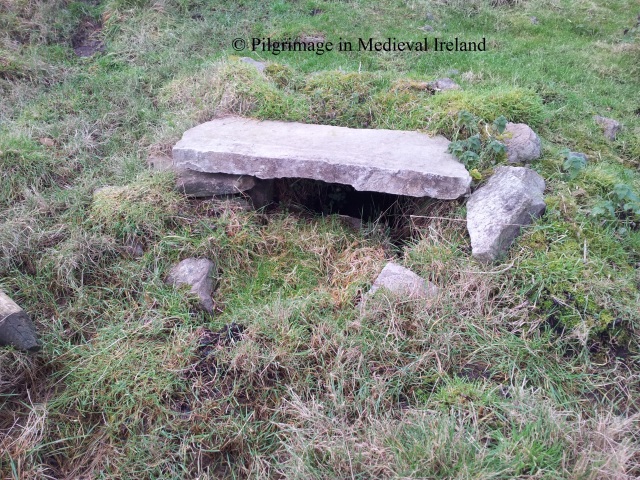 Even if St Nicholas is not buried here Newtown Jerpoint is a very special place.  The  sites owner Joe told me he feels a strong connection with St Nicholas and the site and he suspects the saint is buried here. He also told me that  since the site has been open to the public there have been many  happy coincident  which have connected people,  the saint and the site. So  if you get the time take a visit to Newtown Jerpoint.