Last year I began a series of post on the saints and their animals. Continuing with this theme this post will look at the folklore and legends of cows associated with the great ecclesiastical complex of   Kilmalkedar /Cill Maoilchéadair in the Dingle Peninsula, Co Kerry. 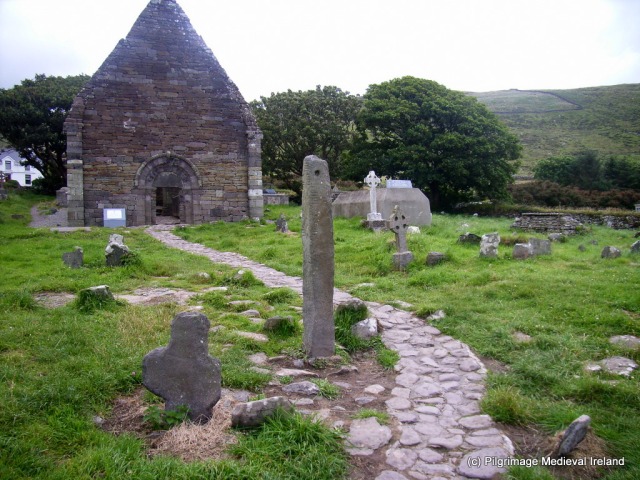 Kilmalkedar medieval church part of the the Kilmalkedar Ecclesiastical Complex

The site of Kilmalkedar  consists of  a large ecclesiastical complex with archaeological remains dating from the early medieval to late medieval period.  It is dedicated to a little known saint called  Maolcethair, whose death was recorded in the martyrology of Donegal (Cuppage 1986, 308). The site was also linked to St Brendan and was  part of the  pilgrim landscape of the Mount Brandon. Unlike the previous tales about the saints and their animals ( Ita and her donkey, Patrick and his cow, Ciaran and his cow, Manchan and his cow), St Maolcethair  is not directly associated with any animal  but ecclesiastical complex has two interesting folk tales that relate to miraculous events associated with cows. These stories are embedded in the physical landscape.

The Cow and Thief’s Stone

One of the stories concerns the theft of a cow, a familiar theme from  the earlier posts in this series. The story goes that a thief tried to steal a cow from the community at Kilmalkedar. The cow bellowed, which woke up one of the monks.  One of the monks

‘caused the thief to stick in the stone  which he was climbing and the hoof of the cow to get embedded in the stone on which she had alighted from the fence. The thief set up a howling form pain and fright and prayed humbly for mercy and forgiveness. The holy man released him and warned him to sin no more. The imprints of the thief’s knees are to be seen to the present day and the impress of the cow’s hoof is also discernible’ ( Dingle Survey Files  after mss of John Curran, unpublished  OPW file). 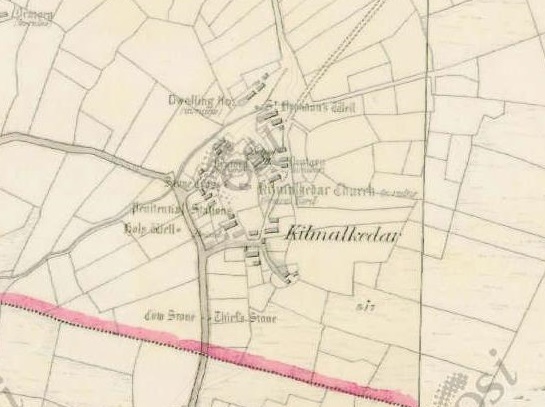 1st ed OS map of Kilmalkedar (1842) showing the site of the Cow stone and Theifs stone.

Until 1967 two stones  known as the cow  and thief stone were located on either side of the road close to the church and graveyard at Kilmalkedar,  they were set 150m south of the graveyard and some 350 yards northeast of (KE042-028). Both were recorded on the 1st edition OS map of 1842. Unfortunately the cow stone  has now disappeared, both stones  were set on either side of the roadway until at least 1967.  The  cow stone (KE042-02701) was located on the west side of the road and the thief stone (KE042-027) on the east. Killanin & Michael (1967, 96) described the two stones as standing stones and the Dingle Survey notes that the theif stone ‘stood 0.81m high at the base’ (Cuppage 1986, 323). However descriptions in the Dingle Survey Files suggest that the  cow stone was a flat stone. 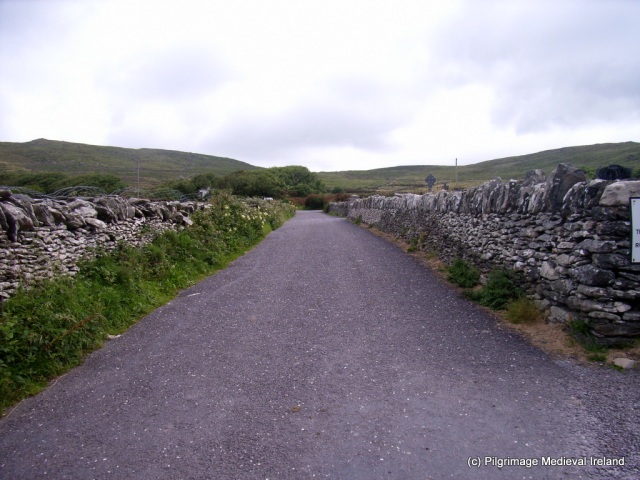 View of the road outside if Kilmalkedar Graveyard the Cow and Thiefs Stones were located 150m to the south.

A story recounted  by Mary Jane Leadbeater Fisher in her book Letters from the Kingdom of Kerry: In the year 1845 also records the tale but in her account the story is linked to another archaeological feature of the landscape, a large multi basin bullaun stone know as the Keelers or na Beirtí (Milk Coolers).

A cow is the subject of this legend—a cow of size and breed suited to provide milk for the giant race of those days. We saw the milk vessels, and if she filled them morning and evening, she was indeed a marvellous cow. In a huge flat rock were these milk pans; six large round holes, regular in their distances from each other, and nearly of equal size; they could each contain some gallons of liquid. This said cow gave sufficient milk for one whole parish; and was the property of a widow—her only wealth. Another parish and another clan desired to be possessed of this prize; so a marauder, endued with superior strength and courage, drove her off one moonlight night. The widow followed wailing, and he jeered her and cursed her as he proceeded. The cow suddenly stopped; in vain the thief strove to drive her on; she could neither go on, nor yet return; she stuck fast. At length, aroused by the widow’s cries, her neighbours arrived, and the delinquent endeavoured to escape. In vain—for he too stuck fast in the opposite rock; he was taken and killed. The cow then returned to her own home, and continued to contribute her share towards making the parish like Canaan, “a land flowing with milk and honey.” The prints of her hoofs, where the bees made their nests, are still to be seen in one rock ; and those of the marauder’s foot and hand in another, where he was held fast by a stronger bond than that of conscience (Leadbeater Fisher 1847, 48).

The ‘huge  flat rock’ she refers to seems to be  a large stone known as the Keelers or ‘Beirti’.  This is a large irregular, shaped bullaun stone (KE042-026007)  located 50-60m northwest of the Romanesque church at Kilmalkedar. The stone  has seven depressions of oval and circular shape with depths of 0.04-0.25 diameters 0.22-0.42m diameter. This stone is associated with a magical cow known who is known in folklore form other parts of the country. 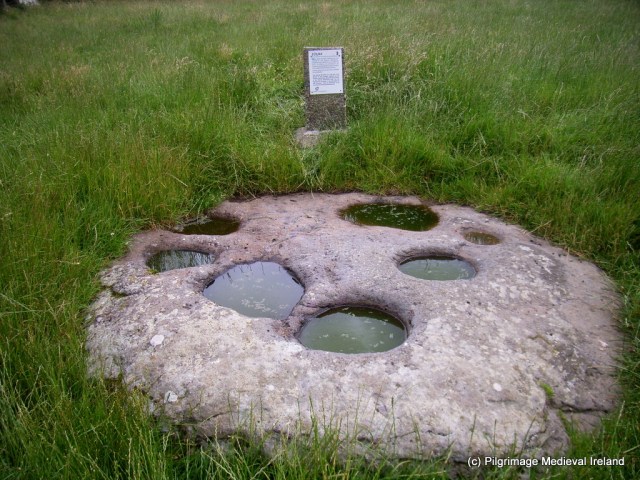 The  legendary cow was the  Glas Ghoibhneach,  she was said to a have been a marvellous milker.  The Glas Ghoibhneach translates as ‘the grey of Goibhniu’. Goibhniu was a mythical smith who likely derived from a god of the same name. The legend of the cow  is  very old and widespread across Ireland. According to O’hOgain

legend told of her all over Ireland describes how she filled with milk every pail put under her by her unnamed owner. However, a jealous woman claimed that she had a vessel which the Glas could not fill, and accordingly she brought a sieve and began to milk the great cow. The Glas yielded a continuous stream of milk, enough to fill a lake, but it all ran through the sieve. Eventually, she became exhausted by the effort and died.

The tradition from Kilmalkedar tells that the glas was milked into the basins of the rock by the monk from the monastery (An Seabhac 1939, 117). Interestingly additional stones associated with the magical cow are found a few miles to the southwest, the stones are  a pair of standing stones known as ‘Geata an Glas Ghaibhleann’ or the gate of Glas Ghaibhleann.

Cuppage, J. 1986. Archaeological Survey of the Dingel peninsula. A description of

the field antiquities from the Mesolithic Period to the 17th century A.D. Oidhrecht

Leadbeater Fisher, M. J in her book Letters from the Kingdom of Kerry: In the year 1845. pub 1847. Dublin: Webb and Chapman