Continuing on with my series of posts on The Miraculous Animals of the Irish Saints ( St Ciaran and his cow, St Manchan and his cow and St Patrick and his cow) I thought it was about time to write a post about a female saint.

St Ita of Kileedy is on of my favourite Irish saints.  St Ita ( Íte/Íde ) was  born in Co Waterford in the sixth century she was also the founder of the a great church and school at Killeedy in West Limerick. 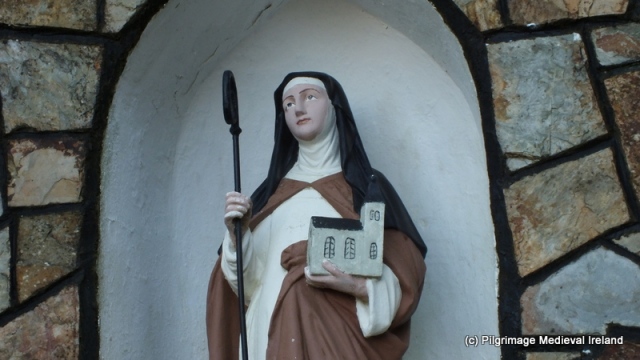 Statue of St Ita at Kileedy

The place-name Killeedy or Cell Íde in Irish, translates as the church of Ita (www.logainm.ie/en/1564?s=Killeedy). 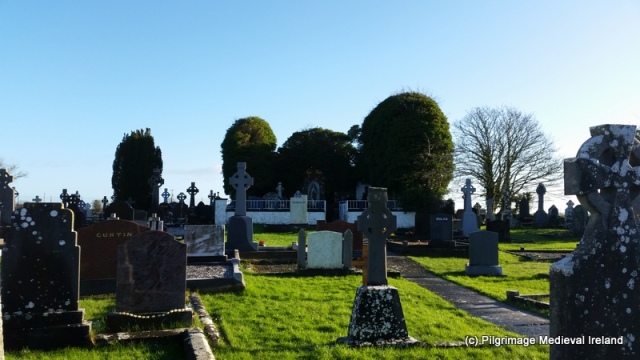 The site of St Ita’s monastery at Kileedy

Like her male counterparts the saint is associated with an extraordinary animal. Ita was the proud owner of  a very special donkey.

In folk tradition Ita’s church was associated with a ringfort located four miles south-west of Kileedy, on the northern slope of a hill called Seeconglass near Mount Collins. The ringfort was referred to as Boolaveeda or ‘Ita’s dairy; (Killanin & Duignan 1967, 389).  It was said that all the milk that was used in the convent was brought everyday from the dairy to the nuns at Kileedy by the little donkey.

One day, as the poor beast was passing through the town of Tournafulla with his accustomed burden, a cruel hearted native attacked him with dogs. The donkey, flying from his pursuers, jumped across the river that flows by the townland, leaving the impress of his hoofs on a ledge of rock which is still pointed out. When St. Ita saw the donkey on his arrival, all torn and bleeding, in her anger she cursed the place where the outrage was committed (Begley 1906, 55).

There are a number of variations on this tale, in one account the saint was visiting Tournafulla and left her donkey unattended when some local boys frightened  the donkey causing it to run away.  Ita became very angry and when she retrieved her donkey she cursed the boys and their locality.  Tournafulla/Toornafulla   or Tuar na Fola in Irish  , tuar  means paddock, (cultivated) field, pasture Fola means blood (http://www.logainm.ie/en/1414152?s=Toornafulla)

According to Begley this tale may have very old origins as the taxation rolls of 1306, record the presence of  a chapel called De Monte Maledictionis, or the ” Chapel of the Mountain of the Curse,” mentioned as belonging to the church of Killeedy.  Begley recalled that in the townland of Tournafulla, the site of an old church was still pointed out in 1905, evidently the place where the above chapel was built, as there is no other locality in that part of the country having such a tradition (Begley 1906, 55).

In another story the donkey’s  caused a miraculous alteration to a plant. In the story Ita was out riding her donkey when it’s leg became lame. The saint then removed a thorn from the donkey’s hoof. The thorn grew into a tree whose thorns turned downwards and were therefore innocuous (Ó hÓgáin 1991, 259).

One day she was riding  on her donkey and he  was lame. When she looked at his  she found a thorn. She pulled it out and stuck it in the ground, and a bush grew up and all its thorns grew down (NFCS Dromcollagher, 497:051).

Begley, The Diocese of Limerick, Ancient and Mediaeval, 55.

Ó hÓgáin, D. 2006. The lore of Ireland :an encyclopaedia of myth, legend and romance /

One comment on “Holy Cows. The Miraculous Animals of the Irish Saints: Part Four St Ita and her donkey”