Last summer I spent a day exploring some of the archaeology sites in the parish of Kilmovee Co Mayo. Kilmovee is located a short distance from the town of Ballaghadreen in  Co Roscommon.  Local man, Tommy Horan  was kind enough to act as my guide for the day.

The parish gets its name from St Mobhí. Kilmovee or Cill Mobhí in Irish, means the church of St Mobhí. It is said he  came to the area as a missionary, continuing on the work of St Patrick.

The day began in the townland of Rusheens West with a visit to one of the largest bullaun stones I have ever seen. The stone is known as Na Trí Umar Bheannaithe/The Three Holy Water Fonts.  The  bullaun stone is a large boulder with three large depressions.  It sits on a plinth against a wall at the side of a small byroad. Folklore tells that the stone was transported from Killericín and placed in its current position. 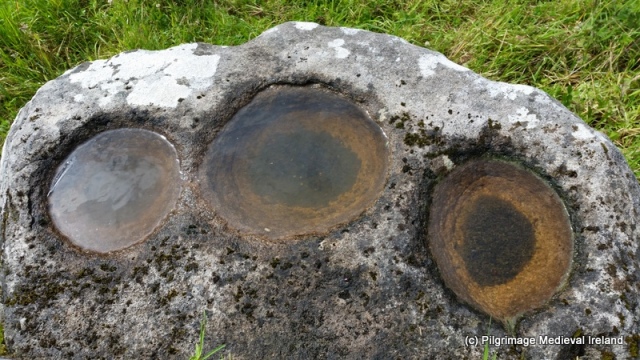 From the bullaun stone we travelled on to the site of a holy well called Tober na Bachaille/The Well of the Crozier. The holy well is located in marshy field. As the site is  on  a working farm so permission should be sought before gaining access.

Field where Tober na Bachaille/ The Well of the Crozier is located.

Folklore tells that when St Mobhí came to the area as a missionary he needed somewhere to baptise new converts.  Not having a suitable water source the saint struck the ground three times with his crozier and three wells sprung up on the spot.

It is thought there was originally three wells  here but today only one well is visible.  The well is very overgrown  and a small blackthorn tree  grows beside it. The well is a spring  enclosed by a low stone wall.  The location of single well is marked on the 1st ed. (1839) OS 6-inch maps which could suggest that the three springs are within the well enclosure. Unfortunately the Ordnance Survey Letters  relating to Mayo fail to mention the well.  The Folklore Commission National Schools Essays provides an origin tale for what it calls the three Blessed Wells in the parish.

St Movee’s sister was a nun and she lived in Sligo. One day she came to Kilmovee to see her brother and the church. She was passing down through Barralackey and there was a boy minding cows. He told her he would help her and he told her that the Ardeull people thought she was a witch and that they were to follow her. He said he would go with her to the church only he had a long way to bring water to his cows. She was very thankful to him and said he would never again be short of water and she — [can’t read the word] on a rock and water filled in it and is there still. In three long steps she reached the church and every step she gave a well sprang up three well in succession and these are called the ‘Blessed Wells’ (NFSC  Cloonierin 114:52).

Tober na Bachaille is no longer visited by pilgrims and as a result it has become overgrown.  Local knowledge may shed more light on the well(s) and traditions relating to pilgrimage. 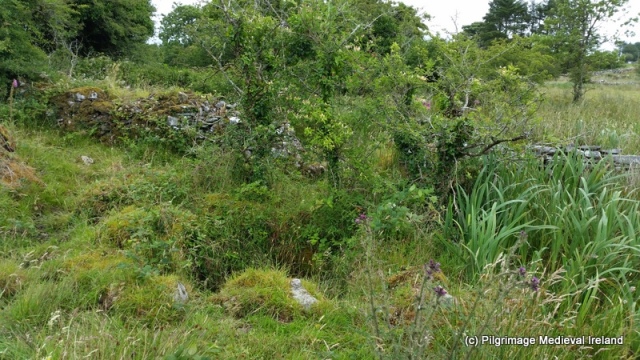 To the north of the well is a large stone built penitential cairn or leacht. Sitting on top of the cairn is a stout Ogham Stone.

Macalister noted that the ogham stone, once acted as a ‘kneeling stone’ and sat on the low wall surrounding the holy well. The stone had moved to its current position by the 1940’s (Macalister 1945, 7-9).  An ogham inscription is found along one of the edges of the stone. Macalister identified this inscription as AlATTOS MAQI BR…. He also suggests that the top of the stone was deliberately cut away by a mason during the building of the wall around the well (ibid).

From the holy well we  traveled on to  the ruins of a medieval parish church called An Teampall Nua also known as St Patrick’s church.  Local folklore recalls that  when the church was first built it was called the ‘New Temple’.

All that remains of the church are the chancel and parts of the nave walls. The walls of the church have been rebuilt and incorporated architectural fragments of windows and doors.  A chancel arch still survives in relatively good condition and appears to have been remodelled in the past. The original arch was rounded and built of cut sandstone, it was later altered and filled with masonry and replaced with a smaller  to a pointed arch defined by vousoirs. The exterior of the church is surrounded by rubble masonry that likely came from the church. In 1838 the Ordnance Survey Letters for Mayo described the church as on

on the East gable of which there is a window about 6 feet and 6 inches broad. Part of side walls remain, West gable is perfect (Herity 2009, 288).

The church is surrounded by a historic graveyard and mass is said here once a year.

Our day concluded with a visit to a large ringfort called  An Caiseal located in the townland of Kilcashel/Coill an Chaisil, which means ‘the wood of the stone fort’.

The ringfort is very well-preserved and is on private land so permission must be obtained before entering.  The fort   measures 30m in diameter and is constructed of a single circular wall which is 5m thick and 3m high.

View of exterior of Caiseal ringfort

The fort is entered through a formal linteled entrance.

The interior contains the ruins of two house sites and a souterrain. 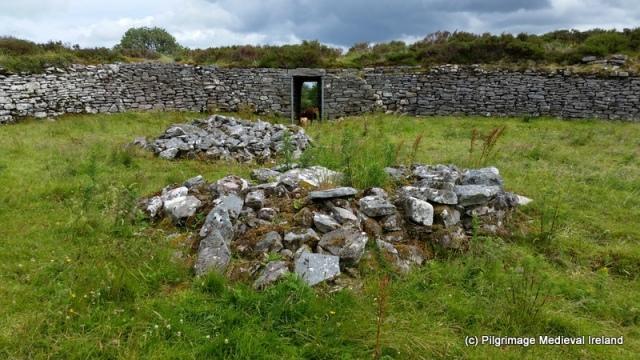 The top of the walls are accessed from the interior via four sets of V shaped stone steps.

Another interesting feature of the fort is  a creep-way that links two internal wall-chamber within the walls.

The wall  chambers appear to be aligned to the morning sun.

For three mornings, light goes into the back of the chambers which are two meters deep and joined at the back by a six meter passage way. Each morning the new sun has moved on half a meter on the back of the wall. There is about 20meters of the back wall (of the Caiseal) that is traversed by the sun. This means that the sun shines only for about  40 days  on the back wall twice a year. This is between Winter solstice and both equinoxes…  The first  chamber was lit on the 5th of October, the Second was lit on or about the 21st of October, but due to the curvature of the wall it is still in the chamber on the 24th …

Two months later the sun will again be shining in the this chamber on the 20/21 February as the days lengthen (Mac Gabhann no date 10-11).

For a more detailed discussion of the archaeology of this site see the Kilcashel project website. My day in Kilmovee was a brilliant experience and  it reminded me of the  wealth of local archaeological and historical sites that are to be found within and around all Irish villages. So really you don’t need to travel very far to find wonderful historic and archaeological sites to visit.

As many of the sites we visited were on private land, permission was always obtained before going to the sites.  If anyone is interested in visiting the area please contact the Kilmovee Community & Heritage Centre, the people who work here are so helpful and will be able to help you find out if  access is possible. Contact details and opening hours can be found on the Kilmovee website  and Facebook page (see links below). The community centre also houses a wonderful Heritage Centre called ‘Cois Tine’ (beside the fire). The  centre is design is based  on a traditional Irish cottage  and holds lots of information, photographs about the parish history, archaeological sites and folklore connected to the area. I recommend a visit to the Heritage Centre  before any exploring as it is a great way to begin a trip around the parish.

If you are in the area I would also highly recommend a visit to Urlaur Abbey located just a few miles from Kilmovee. Located on the edge of Urlaur lake the Friary built circa 1432 is one of Ireland’s best kept secrets.  Its setting alone is worth a visit.