This week I  headed along to  another historic graveyard at Middlequarter,  Newcastle, Co. Tipperary.  The old graveyard at Newcastle  along with the graveyards at Molough, Shanrahan and Tubrid, are  currently being recorded by local community groups trained by Historic Graves (http://historicgraves.ie/).

The Medieval Church and graveyard at Middlequarter, Newcastle, image taken from Bing maps

Newcastle graveyard  is located close  to  the Anglo-Norman castle which gives its name to the area.  The remains of the castle consist of a  hall house with a vaulted roof, a tower and a bawn. The castle  is strategically located  on the banks of the River Suir close to the fording point .  The castle  is  part of a group  of 12th -13th castles  built in a line along foothills  of the Knockmealdown mountains. This  area was the  frontier  between the Anglo-Norman territory and the Gaelic territory of the Déises . Newcastle was in the control of the Prendergast family from the 13th to the 17th century, it then  passed into the hands of  the Perry’s family. 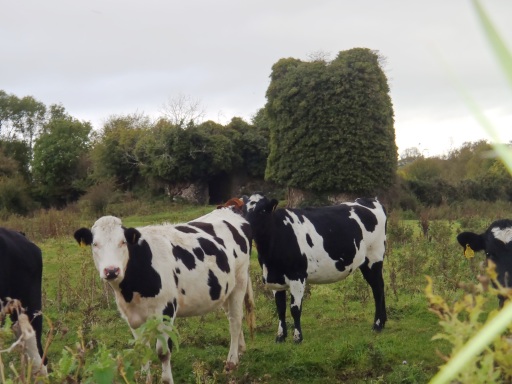 View of Newcastle castle from the nearby graveyard

The historic graveyard  surrounds  a 12th /13th century church, which functioned as the medieval parish/manorial church .

The medieval church at Newcastle

Newcastle church is one of the largest medieval parish churches in the surrounding area, being 29m  in length and 10m in width. Any past dedication to a saint has long been forgotten and today the church is simply known as the old church.

Southern doorway of the church

The church is entered through two ornate doorways  at the west end of the church, located in the  north and south wall.  The south doorway is simpler in design with a moulded surround. The north doorway is slightly taller and has roll and fillet-mouldings with traces of hood- moulding over the apex of the door. Both doors are directly opposite each other.

The North doorway of the church at Newcastle

There is no evidence of an internal division   between the chancel and the nave within the church, nor is there any traces of a choir.

The east gable  of the church is now partially collapsed. Luckily the Ordnance Survey Letters of 1840 provide the following decription

Its east window is in the pointed style and constructed of brownish sandstone chiselled… 6 feet in height and 1 foot 8 inches in width. It is divided into two compartments the stone which separates them has been removed (O’Flanagan 1930 Vol.1,  22)

View from window at NE end of the church

The  Ordnance Survey letters also state that ‘ the church was burnt by a Prendergast who lived in Curraghcloney Castle’  (O’Flanagan 1930, vol. 1, 23).  However today  many   local people tell the tale, that it was Cromwell  who burned the church . 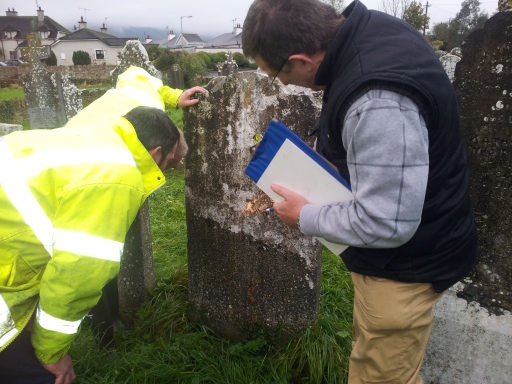 The graveyard  has a mixture of 18th , 19th and 20th century graves, including some very recent ones. In total there are  204  grave markers in  the graveyard.

It is difficult to decide which gravestones to include here  as there are so many interesting ones. The stone below was carved in  1755  to commemorate the death of Denis Morison. 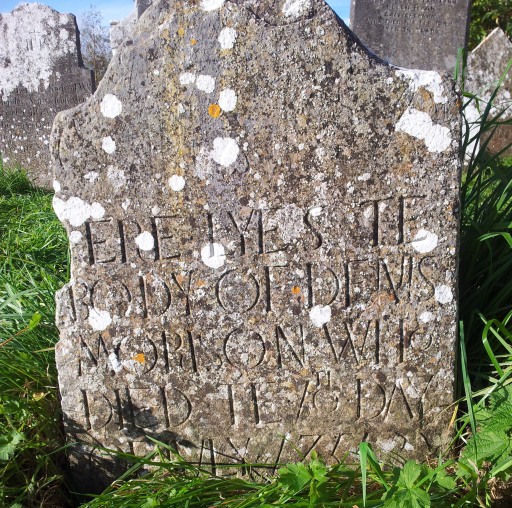 A simple gravestone dating to 1755

Some of the early gravestones have lovely decoration. The  stone below depicts the crucifixion scene and a stone by the same mason has been identified in Shanrahan & Tullaghmelan graveyards. 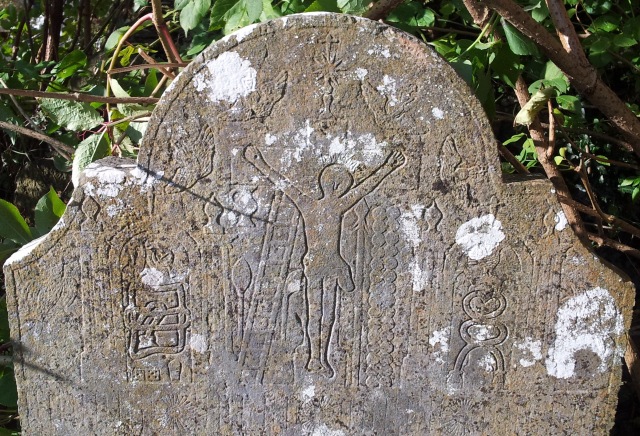 The interior of the  church is packed with approximately 60 burials. At the east end are three unusual  burials. A chest tomb sits in the NE corner of the church. The  inscription of the tomb is worn away and impossible to read.  O’ Hallian  in his book Tales from the Deise  gives the following   account of the inscription

Here lyeth the body of Jeffry Prendergast of Mullough in the county of Tipperary who served in Flanders as Captain under the Great Duke of Marlbourugh, from  whom he had the honour of reciting public thanks for his services at the siege of Ayr in 1710. Died 1713. he was an affectionate husband and tender father, in friendship steady and sincere; to all beneath him courteous, truly just and therefore universally esteemed and beloved. He lived under the influence of religion and died cheerfully supported by it the  27th day of March in the 64th year of his life.

John Burke’s A Genealogical and Heraldic History of Extinct and Dormant Baronetcies….. records that Jeffrey’s father Thomas Prendergast, esq was born in 1614 and married Elinor the sister of Walter the 11th Earl of Ormond. The text also says  Thomas died in 1725, aged 111 years ‘as appears on his tombstone at Newcastle, near Clonmel’.  Once the survey is complete if the tombstone commemorating Thomas survives I am sure the volunteers will uncover it.  I would wonder if he was not interred with his son Jeffery.

Beside the Prendergast tomb are two grave slabs which I recorded as part of a project for  college in 1998.  The  inscription on slabs have  deteriorated since  I last visited here. One  has a motif of  a horse standing on its hind legs in an oval frame. This is the grave of Samuel Hobson sq of Muckridge,  who died in 1782.  The second slab records the burial of ‘Lieu Henry Prendergast of Mulough’ and his wife who died in 1776 , along with  their a coat of arms. 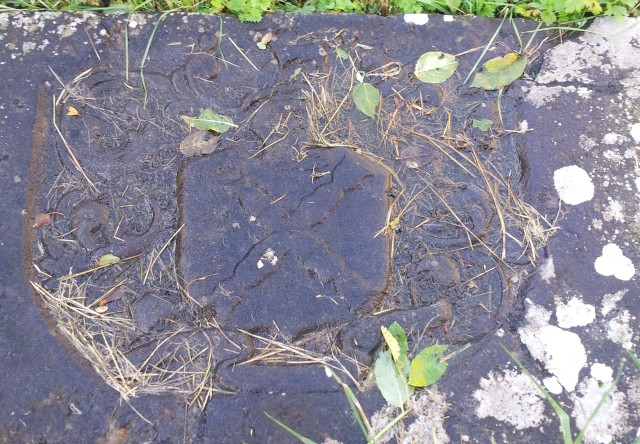 Crest on the Prendergast grave slab

Hallinan, M, 1996. Tales from the Deise: an anthology on the history and heritage of Newcastle, the Nire Valley, and especially the Parish of Newcastle and Four-Mile-Water. Dublin: Kincora Press.

O’ Flanagan, Rev. M. (compiler) 1930. Letters containing information relative to the antiquities of the county of Tipperary collected during the progress of the Ordnance  Survey in 1840. 3 Vols. Bray: Typescript.

Power, Rev. P. 1937. Waterford and Lismore; a compendious history of the united