Yesterday I visited my first pilgrim site of 2013, St Batholomew’s holy well or Tobar Phárthanáin. The well is to be found  in the  parish of Kinsalebeg in Co Waterford, a short distance from the village of Pilltown and a few miles from the town of Youghal.

The well is located in a field of rough pasture on the east side of the Blackwater estuary, close to a cross roads in the townland of  Moord/Mord,  (An Móird/An Magh Ard or  “The High Plain”) about  mile south of Piltown. It’s really hard to find, I was really lucky to meet a local man who despite being in a hurry  brought me to the well.

The well is dedicated to St Bartholomew, who was one of the twelve apostles. The saints   feast day is  on the 24th of August.  There are a number of accounts of pilgrimage to the well   in the not too distant past, on this day. According to Power  writing in  1937  St. Bartholomew was traditionally held  to be the patron saint of the parish of Kinsalebeg. He also noted that his feast was kept  by local people

on the 24th of August, by visits to the ” Blessed Well” dedicated to him and that on the Sunday nearest to the feast, a public ” pattern ” is held at the well and at the adjoining village of Piltown.

From the NE the well is hidden   in a hollow  in the field close to the boundary ditch.  A short distance to the W is a small stream running into the estuary. 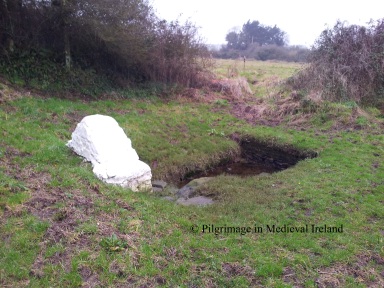 The well itself consists  of a small  of a rectangular stone and mortar built superstructure,  with a triangular-shaped top. 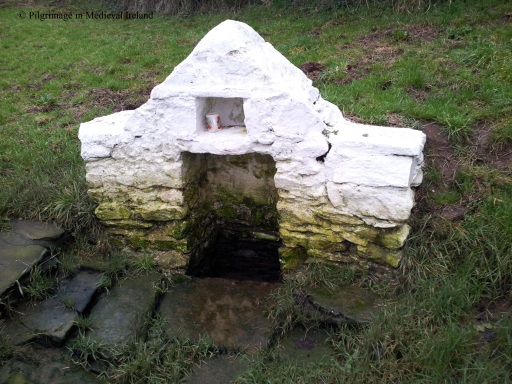 There are two rectangular recesses one at the base where the water can be accessed.

The second recess sits  just above the lower opening  and below the apex of the structure. When I visited here  a modern ceramic mug  was housed within. The structure is white washed.

Stone flags act as steps to the well and  divide it from  the large rectangular trough located beside it.

The larger trough is cut into the earth and  stone faced . The eastern face appears to have collapsed in but the side is still well-preserved. The west  wall is stepped with stone facing  sitting on top of three large  flags which may have acted as steps into  the trough. Perhaps in the past  pilgrims would have taken water from the smaller trough and washed their limbs   in this one.

FitzGerald writing in 1856  notes that  the well

is greatly resorted to for ‘giving  rounds’ at. It is celebrated for several cures, but especially for sore eyes.

A patron at the well is mentioned in a number of sources.  The Ordnance Survey Letters of 1840, state that a pattern was last held here in 1812 on St. Bartholomew’s Day. FitzGerald in 1856 wrote ‘there is a patron held here every 24th of August’. Power writing in  1937 notes

This is a well-known holy well at which a pattern is held and “rounds” made on August 24th.

up to about 50 years ago this well was held in high repute and hundreds of people came here to “make their rounds”.Of late years very few visit it’.

This may suggest the pattern was reviewed for a time after 1840 before declining in popularity  in the early 1900’s. Today the well looks like it is maintained, the white washing of the masonry   and the presence of the mug suggests its probable still used but I wonder by how many people.  Despite the grey day it is really one of the nicest wells I have visited. 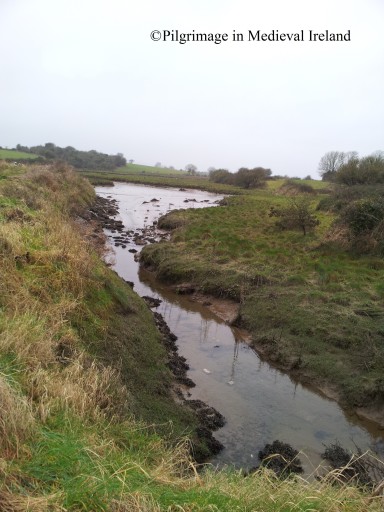 Nearby stream flowing out into estuary.

Rituals  performed by  pilgrims  here in the 19th century  involved the ‘making of rounds’  a tale told by Fitzgerald in 1856 suggests that the pilgrim landscape extended beyond the well.

“ when I visited it last, a couple of months ago, a very intelligent young man of the neighbourhood  pointed out to me two houses some twenty yards from the well, which he said were built on the ground that was formerly taken in by the pilgrims in their circuit of ‘rounds’ , and that to his own knowledge the parties who made the encroachments all dwindled away to nothing – none of them ever had a day’s luck afterwards.”

I haven’t had time to consult the 1st or 2nd edition OS maps but  it is interesting to note that a short distance from the well are two small cairn of  what looks like building rubble .

The well was once associated with a rag tree which  is unfortunately no longer in existence. Fitzgerald gives the following colourful description of the tree and its associated rituals.

the fine old venerable  thorns which overshadowed  it bore a most motley appearance, actually crowded with old red, blue, and green ribbons and rags, as if torn from the dresses of pilgrims, and tied up as a finale to their ‘rounds’  and prayers.

He goes on to describe a conversation with a lady that he meet at the well  who described to him the meaning of this practice at the well.

An old crone engaged in giving her ‘rounds’ told me they were tied up by each to leave all the sickness of the year behind them.

This description of the tree sounds  so very colourful and vibrant. It makes you wonder  how many other wells also had rag tree that have disappeared.

St Batholomew’s holy well or Tobar Phárthanáin is a really peaceful and lovely well. If anyone has any other information about  the well or  modern traditions associated with  it,  I’d love to hear from them.

O’Flanagan, M. (Compiler) (1929) Letters containing information relative to the antiquities of the county of Waterford collected during the progress of the Ordnance Survey in 1841. Typescript. Bray. 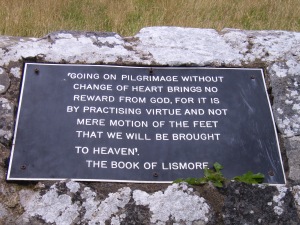