I was hoping to have this post ready for the feast day of St Laserian  on the 18th of April   but better late then never.  St Laserian has strong associations with Co Carlow and I have discussed  the modern pilgrimage to St Laserian  at Old Leighlin Co Carlow in previous posts. The saint is also  associated with a place called Lorum  in Co Carlow.

According to folklore  when St Laserian returned to Ireland from Rome he set out in search of a location to build a monastery.  When he came  Lorum  (a few miles south-east of Muinebheag (Bagenalstown)) he stopped on top of a large hill . The saint was so impressed by the area that he decided to build a monastery here. God however had other plans for him, and while he knelt in prayer an angel  proclaimed ‘ Go where you shall see the first shinning, and there shall your religious house be established’ ( O’Toole 1933, 17).  Taking heed of the angel the saint  set off again on his search which ended when he arrived  Old Leighlin  which became the site of his  monastery.

Lorum (Leamdhroim in Irish) appears to have been the site of a religious foundation. Gwynn and Hadcock (1970, 397) recorded that Lorum was an early medieval monastery dedicated to  St. Laserian . Brindley notes in 1204 the Bishop of Leighlin was confirmed of his possession of lands including ‘Lenidruim’ (Lorum) (Cal. papal letters, 18). The church  at Lorum was valued at 3 marks in the 1302-06 ecclesiastical taxation of Ireland (Cal. doc. Ire., 250) and by the late 16th century it was in ruins.  The Ordnance Survey Letters for Carlow recorded Steward, writing in 1795, noted that the 18th of April, the feast of Laserian was celebrated at Lorum and  until  the  1830s a  pattern day was held here. 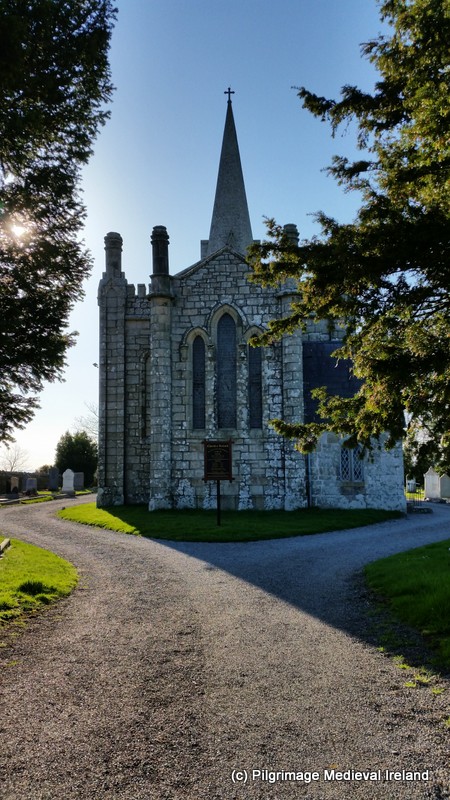 All trace of this monastery and medieval church have long disappeared.  Today Lorum  consists a stunning Church of Ireland Church  built circa 1830 with a historic graveyard  on its western side . The  curve in the road on the east side of this church may tentatively reflex the line of an earlier medieval enclosure. 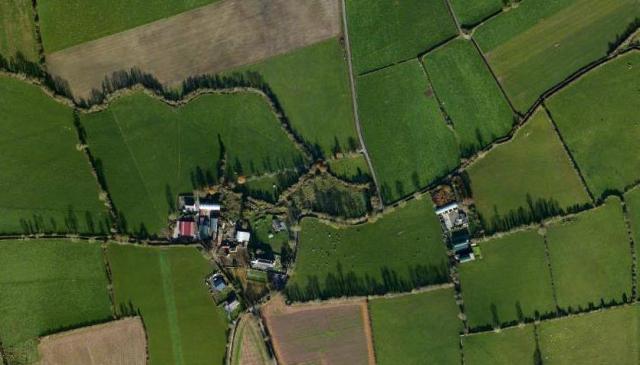 View of Lorum Hill showing the curve in the road on the east side of the church (taken http://map.geohive.ie/mapviewer.html)

Within the historic graveyard are the ruins of  a post medieval church. The structure is  in poor condition  and with the exception  of the west gable only the foot prints of the other walls survive.  The upstanding gable appears to incorporated  stones from an earlier church. 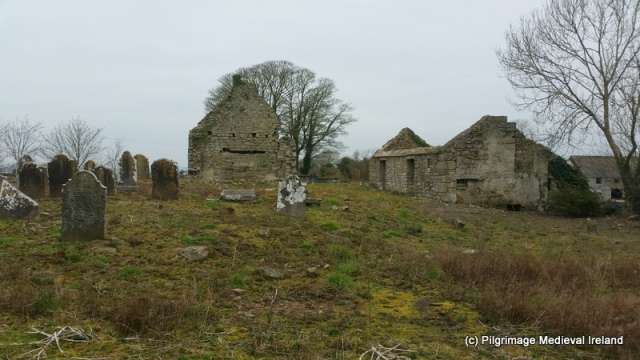 The remains of an 18th century porch with red brick  in the fabric is  attached to the  exterior of west gable of the church. 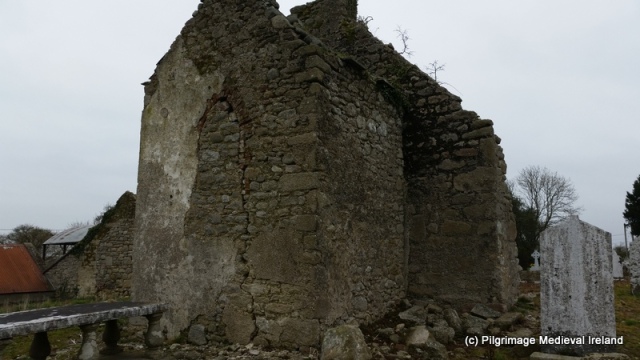 In 1837 Lorum church was described as ‘an old building, containing two modern tombs of the Rudkin family, has been recently repaired’ (Lewis 1837, 312).  The Ordnance Survey Letters  for Carlow (1837-40) recorded that at ‘

Lorum, there was, it is said, an old Church before the present Parish one, which is now falling to ruin, was erected. The spot where it stood is shown in a field, a few perches to the northeast corner of the Parish Church  and a few yards to southwest corner of a Church (C of I church) which is now in progress of being built (O’Flanagan 1934, 311).

The ITA Survey of 1945 identifys the ruined church as the remains of an 18th century Church of Ireland Church and the medieval church as being located as a low-rise of ground inside the graveyard. Both churches were replaced by a  seven-bay Gothic Revival Church with buttresses and parapet built c. 1838 and designed  by Frederick Darley. 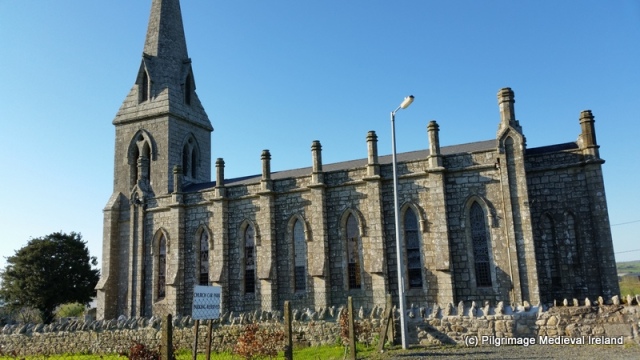 Close to the church are the ruins of a small post medieval house which shows signs of rebuilding and alterations. 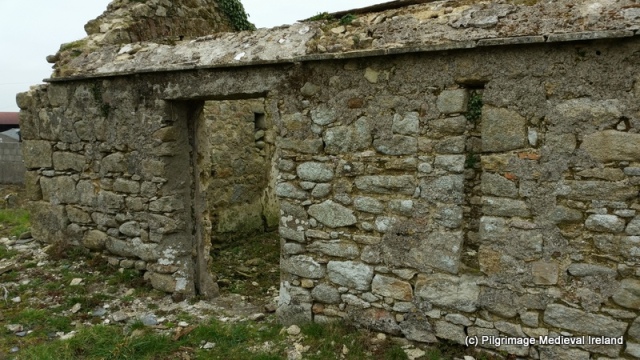 A plain granite base of a high cross provides the only physical evidence of early medieval  activity at the site. 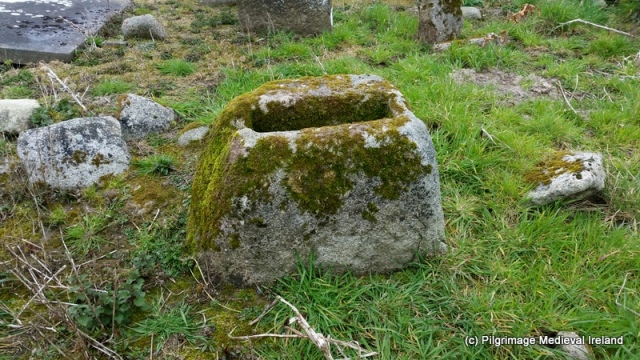 Base of high cross at Lorum

The remains of a second  early medieval cross are found 200m to the west of Lorum graveyard. The  cross is located on the north side of  east-west running bohereen. 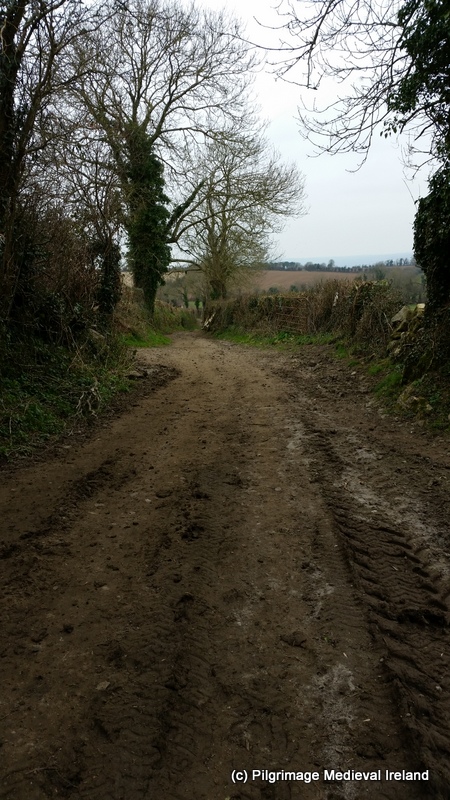 The monument consists of  a medieval cross shaft set in a cross base  sitting on top of a cairn of stones and earth.

Lorum is associated with two holy wells. According to ITA Survey (1945),  a well dedicated to St Laserian was located to the north  the old graveyard. The well was not recorded on the 1st ed OS 6-inch map for the area but the files state it was covered by well house  and located northnorthwest of the  church.  The farmer who owns the land the well was located on told me there was no longer a well here and he had not heard of a holy well in this location before.

A holy well dedicated to St Molaise ( the Irish for Laserian) is located to the east of the old church.  The 1st ed OS 6-inch  marked the well as St Molappoge’s well. The well which is now dry is  stone-lined  and rectangular in shape. It is  covered by  a  large lintel stone. The well is in reasonable condition but is no longer visited by pilgrims. 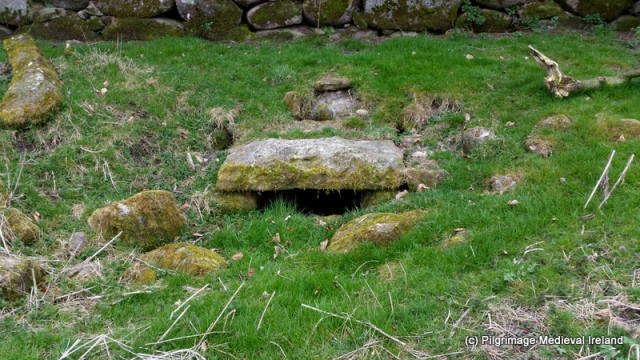 St Laserian is no longer  venerated in the area and all focus of the saint has moved to Old Leighlin.  This is a lovely place to visit and you can see why St Laserian wanted to settle here.

O’Flanagan, Rev. M. (Compiler) 1934 Letters containing information relative to the antiquities of the County of Carlow collected during the progress of the Ordnance Survey in 1839. Bray.

Easter is the  most  important feast day  of the Christian church. It  is a moveable feast and the methods  of calculation used to determine the date are very complex.  Easter  must always occur on a Sunday, as Sunday was the day of Christ’s resurrection. The date is calculated taking into account lunar and solar calendars.  In the early church there were several methodologies used at different points in time  to determine the date.

By  the 5th and 6th centuries there was  divergence within the church as to how to calculate Easter. In Ireland, northern and western Britain (an area which  had strong links to the Irish church, as Irish missionaries had converted this area), the  church used an eighty-four-year Easter cycle and assigned Easter to the Sunday that fell between the fourteenth and twentieth days of the  lunar month. This system of calculation was at odds with the Continental church and the church in southern Britain (that had strong links with Rome). These churches used a system devised by Victorius of Aquitaine (457 AD) and from 630’s the Alexandrian system to calculate Easter.

With two systems  for calculation in play   divergent dates for Easter often occurred.  This meant Easter could be celebrated at different times of the year  in different geographical locations. In the mid 7th century  Rome  began moves to  bring uniformity to the  Christian church. This uniformity extended to a standard date for Easter across the Christian World.

In 630 Pope Honorius wrote to the Irish threatening  excommunication if they did not conform to the Roman way of calculating Easter. As a result of the this letter the southern church in Ireland held a synod in 632  at Magh Lene or as it is  known today  Old Leighlin in Co Carlow. The synod probably took place at the site of Old Leighlin Cathedral which is built upon the ruins of an early monastic site founded by St Gobban in the early seventh century. At the time of the synod St Laserian  who was the successor of Gobban was the leader of the religious community here. 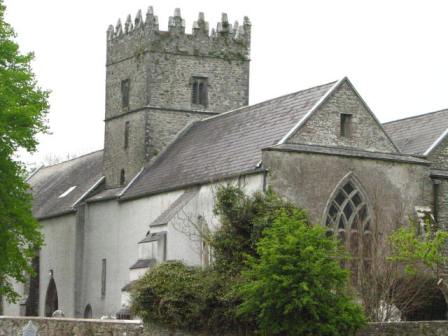 The synod  decided to send a delegation  to Rome. Tradition holds that  St Laserian  was among the delegation. Upon their return the southern church decided to conform to the Roman Easter,  however the northern  church didn’t conform until it was accepted by the archbishop of Armagh in third quarter of the 7th century .

In Britain the famous synod of Whitby 664 settled the question in favor of  Roman system but some clergy unhappy with the outcome  came to Ireland.  For example St Colmán the bishop of Lindisfarne  along with a group of   monks from Lindisfarne  came to Ireland and set up a monastery on Inishbofin Co Galway and later at Mayo.  It was not until 716 that the  Columban federation of churches   finally accepted Roman Easter and there was uniformity  throughout the Christian world concerning Easter.

Grimmer, M. 2008. ‘Columban Christian influence in Northumbria, before and after Whitby’ Journal of the Australian early medieval association, vol. 4, 99-123. http://home.vicnet.net.au/~medieval/jaema4/grimmer.html.