In medieval times this church functioned as the parish church for the parish of Seskinane and was part of the prebend of Lismore. It is located in the ancient territory of  Sliabh gCua. By the late sixteenth century it was in a state of ruin and was recorded as derelict in 1588.
According to Power (1952, 56) the placename  Seskinane signifies “Little Sedgy Moor. The  townland today is made up of rough pasture.

View of mountains from carpark

The church is found at the end of a long  narrow winding bohereen.  It is surrounded by a historic graveyard enclosed by a modern earth and stone bank. 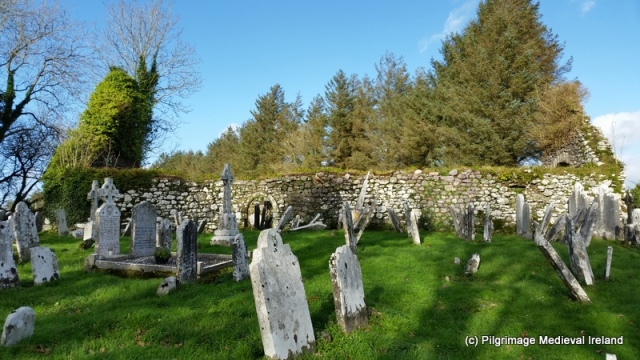 The church has a rectangular plan  without any internal division. The west gable had a double belfry with pointed arches.  The belfry was badly damaged in storm in the early 1990s and what remains   is covered in ivy. The majority of the wall is still standing although without some intervention it is difficult to know for how much longer.  The west gable wall is in poor condition and slightly bowed,  the ivy that covers it is probably holding it together. The wall has a sign ‘danger falling stones from church building’ . The sign tells of the risk to anyone approaching the church. Those who access the site and enter the church do so at their own risk.

One of several signs at the sight illustrating the dangers of falling masonry from the church walls.

The  west wall is lit by two ogee-headed windows, placed one above the other. 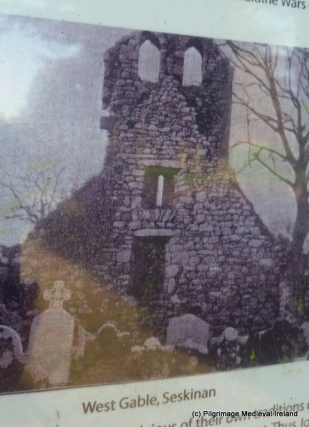 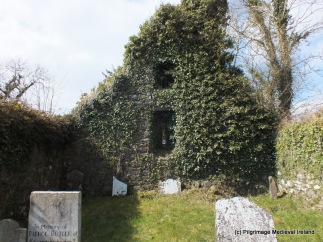 Interior of west gable circa 2013

Exterior of west gable of Seskinane church 2015
The east gable of the church is  lit by a central ogee head window and the lower section of  this window has been turned into a small shrine incorporating a  statue of the blessed virgin.

Exterior of east gable of the church

The exterior of the east widow of church

Doorway in the south wall of the church

View of the south door in the interior of the church and holy water stoup.

This little ruined church is very special as it incorporates six ogham stones within its fabric.
The presence of these ogham stones  has led some  to suggest the  church stands on the site of an earlier church. In the late 19th century traces of a possible ecclesiastical enclosure, no longer  upstanding, were recorded in the field to the south of the church and within the graveyard (Brash 1868-9, 127; Power 1898, 84). There is also very pronounced curve in the field boundary  to the east of the church that along with the 19th century evidence may tentatively suggest the presence of an enclousure.
The majority of  ogham stones at  Seskinane were reused as lintels  and are found in the windows in the north, south and west walls and  in the south door. Two other free-standing stones were also found at the site only one of which is still present at the site. The inscriptions  from the stones were transcribed by Brash (1868-9) and Macalister (1945, vol. 1, 286-9).

A large greenstone ogham stone acts as the lintel of the southern doorway.  The ogham script is visible along the lower edge of the stone.  A circular hole  pierces the stone at the western end it appears to post date the ogham script as it cuts the some of the ogham letters. Macalister (1945, 287) records the inscription as

Ogham stone used as a lintel in the southern doorway. The ogham script is found on the lower edge of the stone.

A second ogham stone has been used as a lintel in the southern window beside the east gable. Macalister (1945, 286)   transcribed the inscription as

One of the voussoirs that make up relieving arch above this lintel also features some ogham script which Macalister transcribed as   CROB (Macalister 1945, 287).

Ogham stone used as lintel in the southern window beside east gable. The second voussoir on the left also has ogham script. 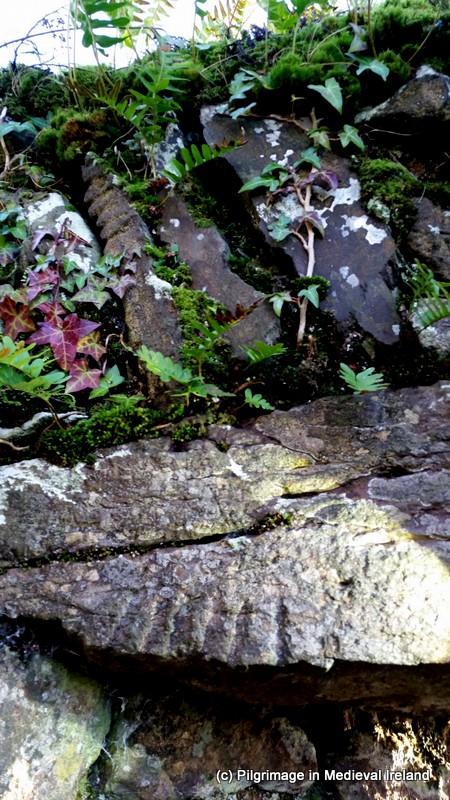 Close up of ogham script on the lintel and voussoir in the southern window.

The  window at the east end  of the north wall of the  church also incorporates a ogham stone of as a lintel. Macalister (1945, 286)recorded the inscription as

Window at eastern end of the north wall

The west wall  of the church is covered in thick ivy at present. It contains two windows both of which have ogham stones as lintels.
Macalister (1945, 287-288) noted the upper stone of the  top window had the inscription

and the lower window had the inscription

Interior of west gable circa 2013 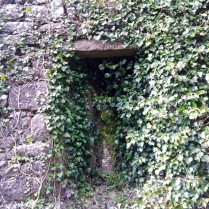 View of the lower window of the west gable of the church.

Ogham inscription of the lower window of the west gable
A seventh ogham stone is  located in the northwest corner of the church. Macalister (1945,  286)  recorded the inscription as

Ogham stone in the northwest corner of the church

The Church and Community in modern times

The parish of Seskinane was dedicated to the Blessed Virgin.  In the past a pattern was held here, it was known locally as La Féilé Mhuire Chnoc Bhuí  and it was celebrated on the 8th of September but over time the tradition died out.
Since 1978 the local community has celebrated mass outside the ruins of church on or as close to the 8th of September (the feast of the nativity of the Blessed Virgin) as possible. It is also a time for the local communities to visit their graves.

A local folk tale recounts that when this the church  was  built it lacked a bell
to call the faithful to Mass.  It was decided to take a bell from the nearby church at Kilkeany (this church has not survived to the present although its location is still remembered) and  use it at Knockboy. Thus the bell was removed from the belfry of Kilkeany church  and brought to the church at Knockboy.

However, when the bell was brought to Knockboy, it was found that no matter  how hard it was rung the well would not chime. It was  said  that the bell broke from where it was hung and made its way back to Kilkeany, in the middle of the night, chiming the length of the journey and that shrieks of mocking laughter could be heard (Keane 2015, 36).

Seskinane church  preserves  physical evidence of medieval devotional practices within the medieval parish of Seskinane.    The presence and survival of such a large collection of ogham stones is culturally significant at a local and  national level. The presence of the ogham stones within the fabric of the church also tells us a little about medieval ideas of re-use and recycling. Given the state of the fabric of the church and the constant barrage of storms our country is currently experiencing, I do worry for the  future of the site, I really feel that this site is significant to warrants a program of conservation.
If anyone is interested in finding out more about ogham stones check out the wonderful Ogham in 3D website. The site  details the work of the Ogham in 3D project  that is currently  carrying out a  laser-scan  of as many as possible of the approximately four hundred surviving Irish Ogham stones and to make these 3D models available online.  The results of the project to date can be seen on the website.
References
Brash, R. R. 1868-9 ‘On the Seskinan ogham inscriptions, County of Waterford’, JRSAI 10, 118-30.
Keane, T. 2015. ‘Churches Old and New ‘ Sliabh gCua Annual  No.21, 35-36.
Macalister, R. A. S. (1945) (reprint 1949) Corpus inscriptionum insularum Celticarum, 2 vols. Stationery Office, Dublin.
Moore, F. 1999. Archaeological Inventory of County Waterford. Dublin: Stationery Office.
Ogham in 3D:  https://ogham.celt.dias.ie/menu.php?lang=en&menuitem=00
Power, Rev. P. 1898 ‘Ancient ruined churches of Co. Waterford’, WAJ 4, 83-95, 195-219.
Redmond, G. 1885-6. Proceedings – ‘Remarks on an ogham stone lying in Salterbridge Demesne’, JRSAI 17, 418-9.