Yesterday  Dungarvan historian John Donovan brought me to see a holy well in Dungarvan associated with the famine. The well is located  just outside the walls of  the old work house now  Dungarvan Community hospital in the Springmount area of Dungarvan.

The old Work House in Dungarvan now the Community Hospital.

Tradition for the areas tells that during the famine when the dead  were brought from the workhouse  they were carried on a cart through a gate into the wall that surrounded the  workhouse. The holy well was located opposite this gateway.  It was said that a local priest called Fr Twomey would come to the well each day and bless the dead with its water  as they left the workhouse on their final journey to the burial ground.

Gate from Work House opposite the holy well.

These actions had such an impact on local memory that the road the well is located on is known as  Fr Twomey’s road.

Another account of origin of the well is found Schools’ Folklore Collection recorded in the 1930’s. This account recalls that the priest ‘Rev Fr Toomey of the order of St Augustine was resident in this town‘.  He had a vision in which the Blessed Virgin  appeared to him and asked him to clean up the well and build walls around it. The same account tells that the well was a focus of pilgrimage  from the mid 19th century with devotion continuing into the 20th  century.

Rounds are to be made for nine days and certain prayers recited. Some people sat five Our Fathers and five Hail Marys, others recite the Rosary during the rounds, and bathe the part of the body afflicted. This well is renowned for the cure of skin trouble.

The account goes on to say the priest died in 1879 and was buried  in the Friary Church in Dungarvan.

The well was not  marked on the 1st ed. (1841) OS 6-inch map for the area. The wells absence from the map  combined with the folklore evidence may suggest that the well came into existence around this date. The well was marked as a rectangular enclosed area along with a cross on the 2nd ed. (1905) OS 6-inch map and the 25-inch (1907) OS map and named as Father Twomey’s well. 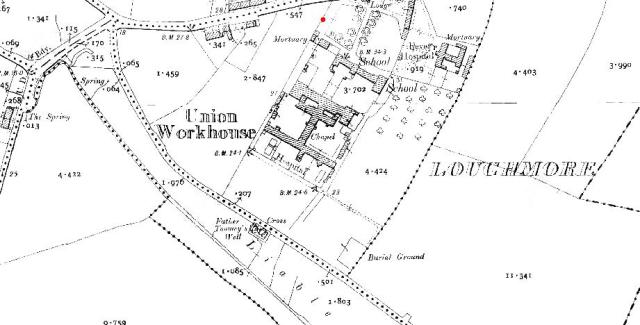 Today the well is a sad sight, devotion has long ceased the cross marked on earlier maps no longer survives. The outer wall was destroyed by a truck  some years back and the council later widening the road extending the road into  part of the well.  What survives  is covered in  concrete and has  a rather ugly appearance.  In its current position it is hard to imagine that this  was once a pilgrimage site and I couldn’t help but wonder what it looked like in times past. I am going to see if I can find out any more about the well and will keep you posted.