The 18th of February is the feast day of St Berrihert/Berrahert of the parish of Ardane, Co Tipperary.  An Anglo-Saxon saint, he is traditionally believed to have  come to Ireland in the seventh century following the  Synod of Whitby. To mark the saint’s feast  this two-part blog post will explore the  archaeological remains and the evidence  pilgrimage  at a site associated with the site, known as St Berrihert’s Kyle in Co Tipperary.

St Berrihert’s Kyle  is  one of Tipperary’s best hidden treasure.  The site is located in the townland of Ardane, in the parish of Templeneiry. It is difficult to find as there is no signposting.  It is located close to the village of Ardane.

From the main road, you will see a sign for “Golden Mile, Winner 2003”, turn left on the opposite road. Half a mile down this road is a gate with a no parking sign. Go through this gate and cross the first field (Be aware that there might be cows or bulls!). From there you will find the wooden trail that will lead you to the Kyle and the Well (visitballyhoura.com).

It is suggested that St Berrihert  came to Ireland following the Synod of Whitby (Ó HÉaildhe 1967, 104).  He is  named in some documents  as brother of the Saxon saint Garailt of Mayo (Ó Riain 2011, 103).  He is associated with a number of places in the south of Ireland mainly around  Co Cork.  He is likely also to be the same saint as St Berichter the patron of an early medieval ecclesiastical site at  Tullylease in the barony of Duhallow, Co Cork.  An interesting cross slab of 8th/9th century date survives at Tullylease. The stone has an elaborate decorated cross and  the text of  with a prayer  for  Beirchachtuire an Irish version of  the Anglo-Saxon Beorhtwine. 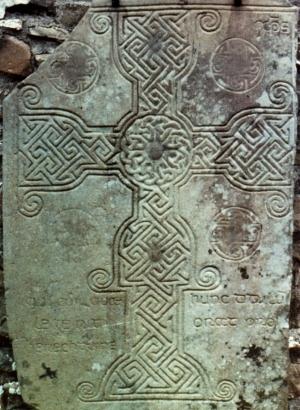 The Annals of the Four Masters  records the death of a cleric with this name at the site in 839,

Berichtir of Tulach Leis died on the 6th of December.

The Martyrologies of Donegal and Gorman record the saint feast day as the 6th of December. His feast was honoured on the 18th of February at St Berrihert’s Kyle, the subject of this post, and at  the 15th of February in West Kerry.  The variation of feast day  perhaps  indicates ‘ that the cult had  become entwined with that of Bearach of Termonbarry‘ whose feast is on the 15th of February (Ó Riain 2011, 102).

St Berrihert’s Kyle  is located on farm land. To approach the site you must cross through two fields.  The land is boggy but a timber path marks the way. There are often horses or cattle in the field.

The Kyle through the years

The Kyle is the oval area enclosed by an earthen bank and contains a large number of early medieval cross slabs.  The landscape of this area has changed  in the last 100 years or so.

In 1907 Crawford described the area as  ‘a circular enclosure in a field west of the well and greatly overgrown with oak tress and thorn bushes‘.  He also noted that all the carved stones, which he counted 22 have been collected and built into a station (Crawford 1907, 61).

The photo above dates  to 1907, it  shows the site as very overgrown with a large number of the cross slabs placed in front of a small tree covered in rags.  Crawford( 1907, 62) mentions  the tree was a thorn-bush and  that a series of  offerings were left here including  statuettes, vases, cups and toy-teapots.

A second photo from the Limerick City Museum collection show that the cross slabs had been moved and built up into a station in front of a wall.  A large rectangular stone was placed in front of the crosses .  This photo is dated to between  1896-1910 and on the reverse image in pencil ‘Berrihert’s Kyle Co. Tipp. 1936’.

Photo of Crosses at St Berrihert’s Kyle  dated 1936 ( from http://museum.limerick.ie/index.php/Detail/Object/Show/object_id/8087)

Today the landscape of the site owes much to work carried out in 1946 by  the Office of Public Works/OPW who  “cleaned up the site”.  They cleared the enclosure of bushes and vegetation. Then they collected all the crosses and built them into a circular  stone structure which incorporates a large oak tree, to protect the crosses from cattle at the south end of the site. The walls are full of cross slabs and it has an ancient look to it. 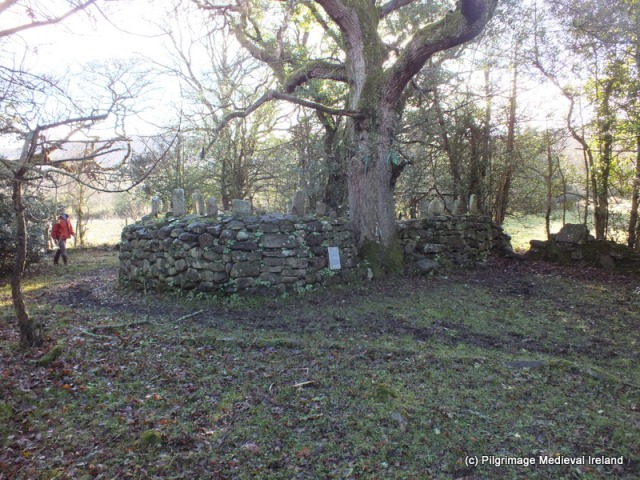 Stone structure built by OPW in 1946

The stone structure is entered via a style,  beside a large oak tree.  Ó HÉailidhe (1967, 103)  recorded 72 cross inscribed stone at the site but only 67 were noted  by the Tipperary Survey in 2011 suggesting some may be missing. 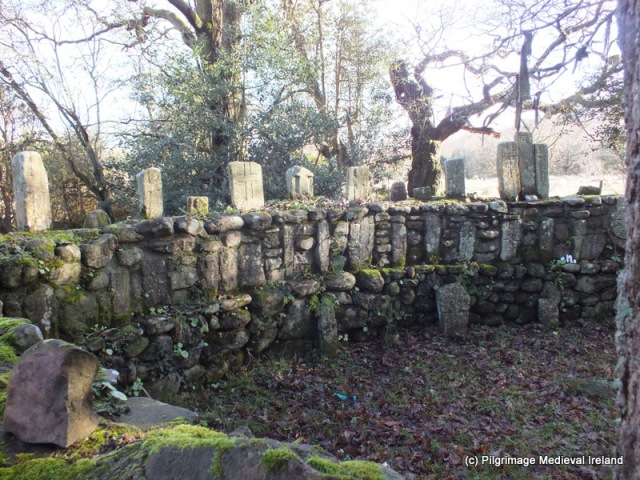 Interior of stone enclosure showing the stone crosses incorporated into the walls.

The majority of the crosses depict a simple Latin cross on a single face.  A small number have decoration on both faces. 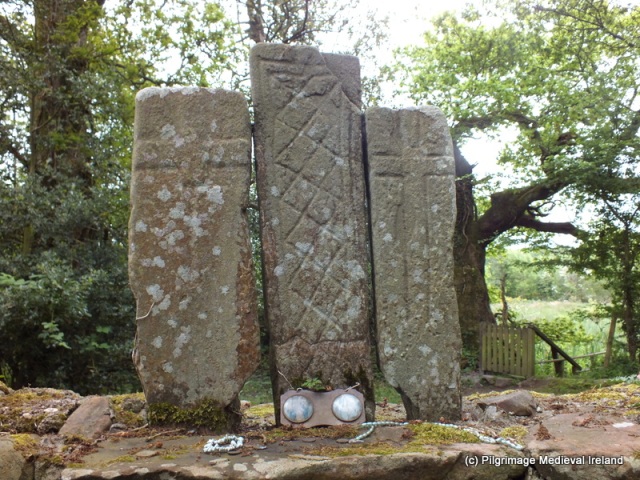 Close up of cross slabs at St Berrihert’s Kyle.

A larger rectangular stone  with one  hollow depression is found within the stone enclosure, in front of the head of a high cross which is incorporated into the  wall.  The surface of the bullaun stone is covered by trinkets left by pilgrims and includes holy statues, small toys, coins and crystals .

A large egg-shaped  stone sits in the hollow of the bullaun stone.  These egg stones occurs at other pilgrim sites and are known as cursing stones. 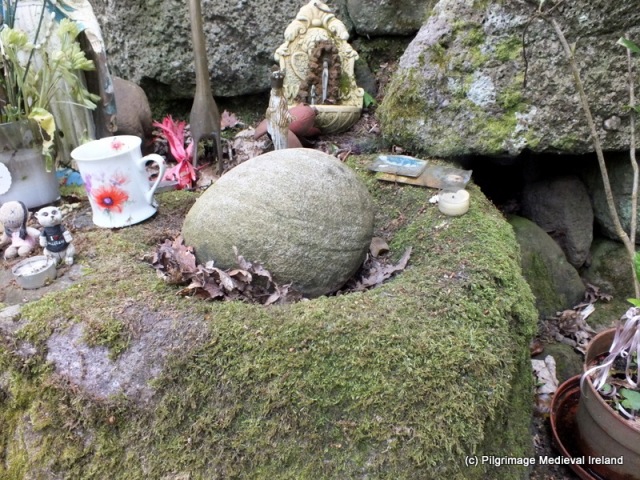 A  holly tree  within the enclosure is covered rags and ribbons tied by modern pilgrims.

The presence of such a large number of  cross slabs at the site may suggest the presence of a monastic settlement.  There are no upstanding remains of any buildings at the site.  If this was a monastic site it is  possible the buildings were built of wood.  In the 1940’s the ground surface of the Kyle was lowered and the soil  from this area was used to build a causeway across the bog to the nearby St Berrihert’s well.  The OPW recorded no trace of walls when lowering the ground level at the site.  It is impossible to know what damage this act did to any sub-surface archaeological remains that may have been present.

Around the edge of the Kyle are a number of small stone cairns surmounted by a cross slab.  These cairns were created  in 1940’s  to mark stations of the cross but there were not part of the original pilgrim stations at the site .

The central area of the Kyle is defined by stone curbing which demarcate a children’s burial ground.

Kerbing at the site.

The nearby holy well is dedicated to St Berrihert  and is located a short distance from the Kyle. The path is marked by a timber track through marshy ground.

Path leading from the Kyle to the nearby St Berrihert’s holy well.

The path continues crossing over a small bridge. 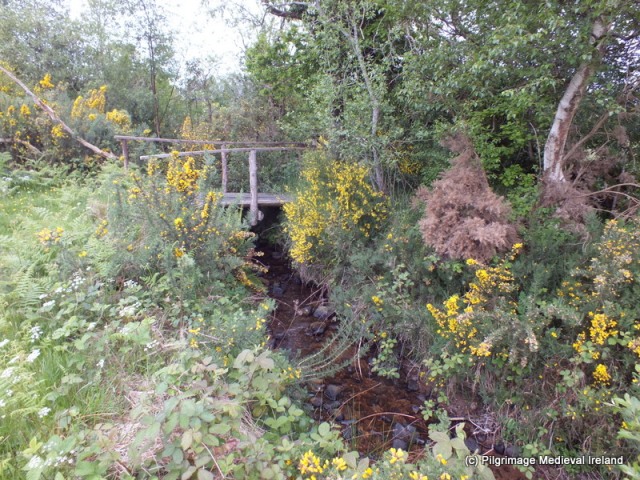 The  well is a large  circular pool is found in a  surrounded by trees and defined by an earthen bank in the NE-NW.

Some of the trees are decorated offering left by  modern pilgrims and range from ribbons, rags, socks and toys.

The well is formed from limestone springs  and the waters bubble forth giving it a really magical appearance. This was very likely a place of prehistoric pilgrimage. 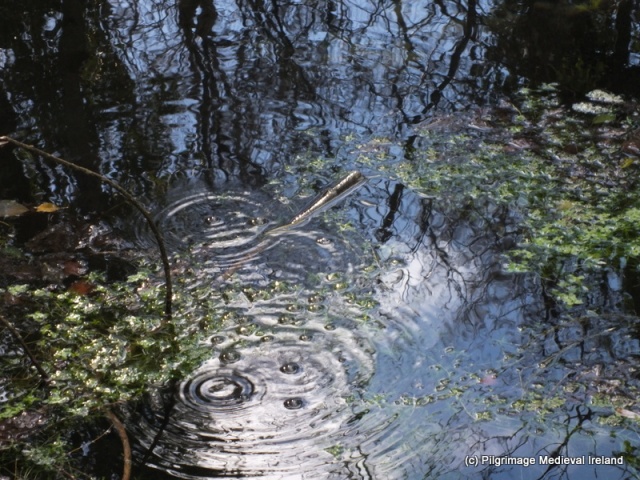 Coming soon is part II of this post, which will look at the history of pilgrimage at the site.

ÓHÉailidhe, P. 1967. ‘The crosses and slabs at St Berrihert’s Kyle in the Glen of Aherlow’ in Rynne, E. North Munster Studies. Limerick: The Thomond Archaeology Society, 102-126.