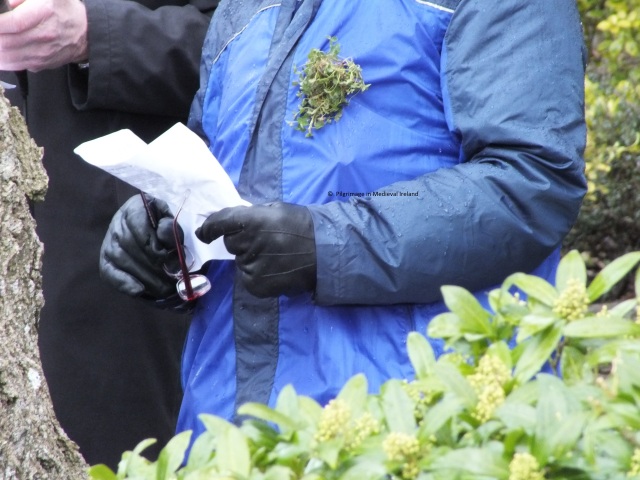 In the parish of Gortnessy Co Donegal  as well as wearing shamrock people would also  send shamrocks to their Irish friends in America to wear on St Patrick’s. This practice was widespread in Ireland. Also in the parish there was a saying that you should throw your candle and candle-stick away on St. Patrick’s Day.

In the parish of Windgap, Co Kilkenny, St Patrick’s Day was known as ‘Cross Day’,  long ago people

put a cross of a furze cipper on the shoulder and wear crosses.

long ago they used to wear a black sally cross on the right shoulder.

the making of a cross on the left sleeve with a stick that had been partly burned. The blackness of the stick is used  to trace out a cross. It is called St Patrick’s cross.(West Waterford Branch I.N.T.O (roll number n/a)

This tradition was also found the parish of Ballyragget Co Kikenny.

On that day in years gone by people used to burn the hazel rod and the head of the family marked the sign of the cross on each persons arm. This was because  St Patrick put the serpent out of Ireland with a hazel rod. 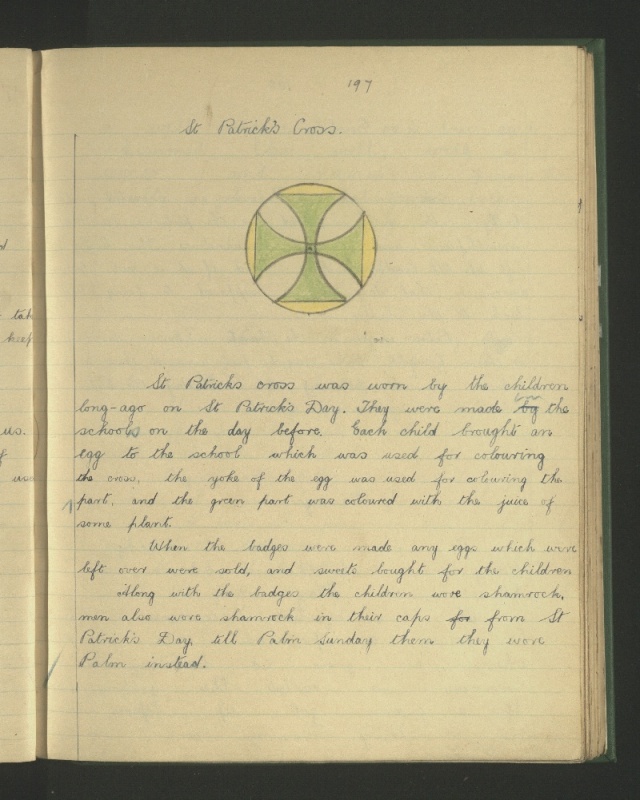 The day before Patrick’s day each child brought an egg to school. The yolk was used to get the yellow colour for the badge and the juice of a green plant used to  achieve the green. At the school at Curragh also in the same parish  the green to colour for the cross was  made from the juice of the pennyworst plant. The cross itself was  a Maltese style cross was drawn on circular piece of  white paper. The cross was coloured green with yellow at the top of each arm. In both school any left over eggs were sold and the money used to buy sweets for the children.  Interestingly the essays for Ardfinnan school say in this parish men wore shamrock in their caps from St Patrick’s Day till Palm Sunday.

From my brief search it is clear that prior to the 20th century there was some regional variation of the St Patrick’s day traditions and I have no doubt that a more extensive search of the Schools manuscripts will turn up many more traditions.