Recently I paid a visit to the medieval pilgrim shrine of the  holy statue of the Blessed Virgin of Monserrat in Spain. 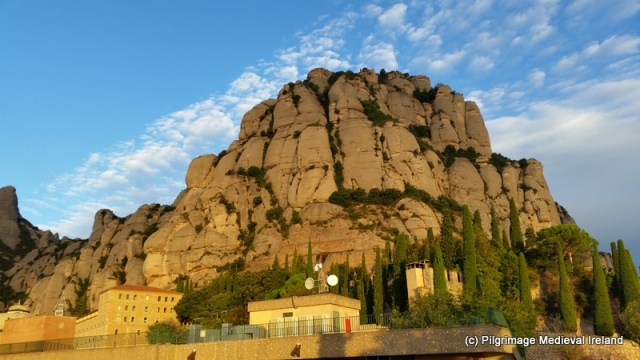 View of the monastery of Montserrat

The shrine is located at a Benedictine abbey at Montserrat, around  40 miles from Barcelona in the province of Catalonia. The abbey is a working monastery and home to  80 monks. The monastery is overshadowed by majestic  mountains. The name Montserrat is derived from Catalan and means ” serrated mountain”.  When you stand back and look at this jagged and rocky mountain you can see why the name was chosen.

Religious activity in the area can be traced back to early medieval times. It is said that a hermitage dedicated to  the Blessed Virgin, was constructed here some time between the sixth-ninth centuries. According to legend  the statue which is the focus of the pilgrimage was carved by St Luke and brought to Spain and hidden in cave at Monserrat. In the year 880 some shepherds were grazing  sheep in the mountains when they saw a light and heard otherworldly singing. When the shepherds when to investigate  they found the statue in a cave.

Following the discovery of a statue of  the Blessed Virgin and Christ Child, the site gradually evolved and by the eleventh century abbot Oliba of the Monastery of Ripoll established a small monastery here beside the chapel of Santa María. A small Romanesque church was built beside the monastery and the image of the Virgin placed inside. 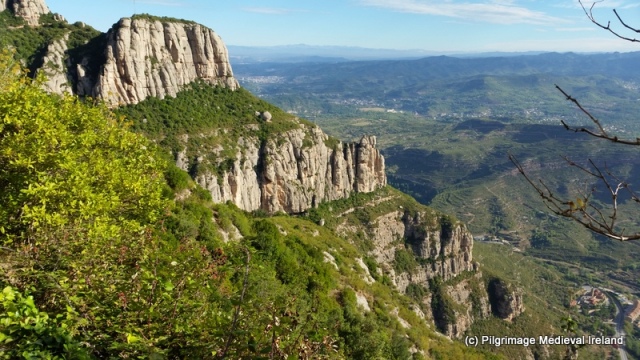 View of the  valley below the monastery at Monserrat

My pilgrimage to Monserrat began in Barcelona when I boarded a coach at 6.45am. I arrived at the monastery at 8am. Monserrat is a very important tourist destination and attracts vast numbers of tourist each year so  the site is always busy throughout the year. My early morning start meant that  I  and my fellow travelers were able to arrive  just as the shrine opened  and  experience the place without the  bustle of crowds, who arrived later in the morning.

The Vewpoint of the Apostles is the first  monument that tourists who arrive by car or coach see. It is named after the Chapel of the Apostles which was demolished in the  early twentieth century.  It offers spectacular views of the valley below.  It is located beside a piece of sculpture known as   The Stairway to Understanding . The Stairway  is a concrete monument 8.7m high created in 1976 by Josep Maria Subirachs. The sculpture consist of  nine blocks  placed one on top of the other that represent the different beings of creation from the more material to the most spiritual.

From this point you walk  along an avenue known as Passeig de l’Escolania or the Choir Walk, passing the buildings where the  which houses the choristers.

As you approaching of basilica of Montserrat you are at all times aware of the mountains that tower of the monastery.

The monastery also houses the Publicacions de l’Abadia de Montserrat, a publishing house that is the oldest printing press in the world, still in operation. Its first book was printed in 1499 and you can buy many of its modern publications in the monastery gift shop.

As you approach the basilica  and the Plaça de la Crue you pass by a wonderful sculpture of Saint George carved by Josep Maria Subirachs, an identical statue of the saint carved in a different darker type of stone is found in the La Sagrada Familia in Barcelona. St George along with Our Lady of Monserrat is a patron saint of Catalonia. 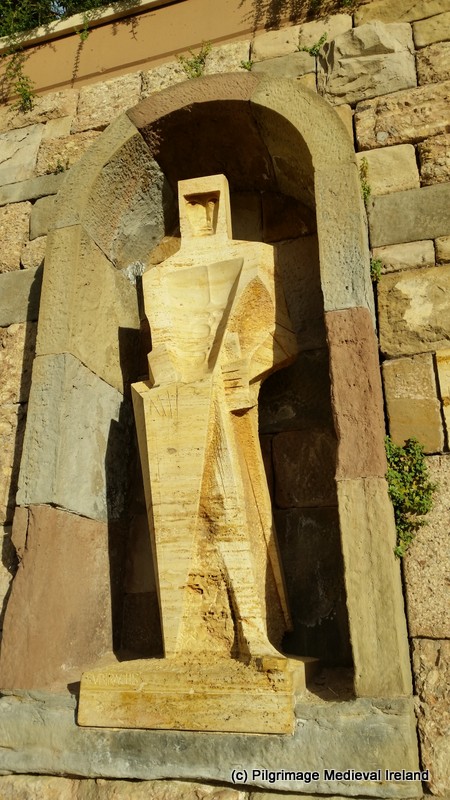 The monastery buildings are constructed from polished stones quarried from the mountain. When the sun shines on the stone it gives it a lovely warm golden colour which blends into the surrounding mountains. From the  Plaça de la Crue  you enter into the atrium in front of the basilica.

From the Plaça de la Crue you enter into the atrium

The atrium of the basilica is surrounded by buildings constructed in the eighteenth century. The mosaic floor is particularly impressive and was designed by Fr Benet Martinez (1918-1988).

Mosaic floor in the atrium at Monserrat

The floor is a reproduction of a design by  Michelangelo for the Campidoglio in Rome. 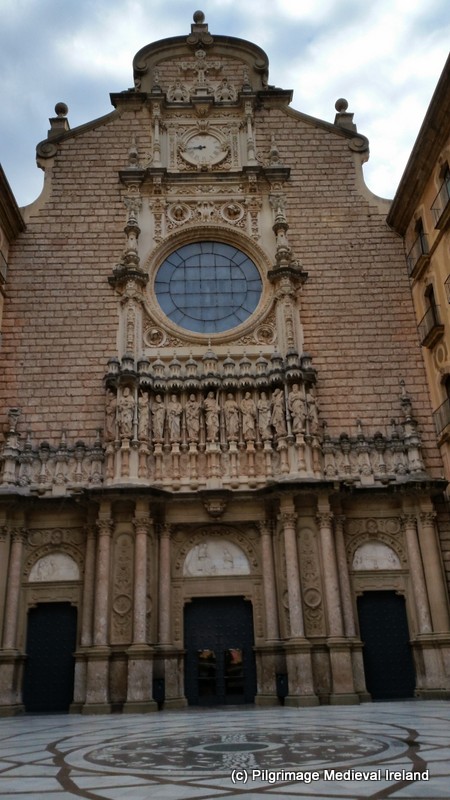 Facade of the bascilia  at Monserrat

The current facade of the basilica was created in 1901, above the door are  sculptures of Christ and the twelve apostles.

The statue of Our Lady of Monserrat  is located in the basilica above the high altar. 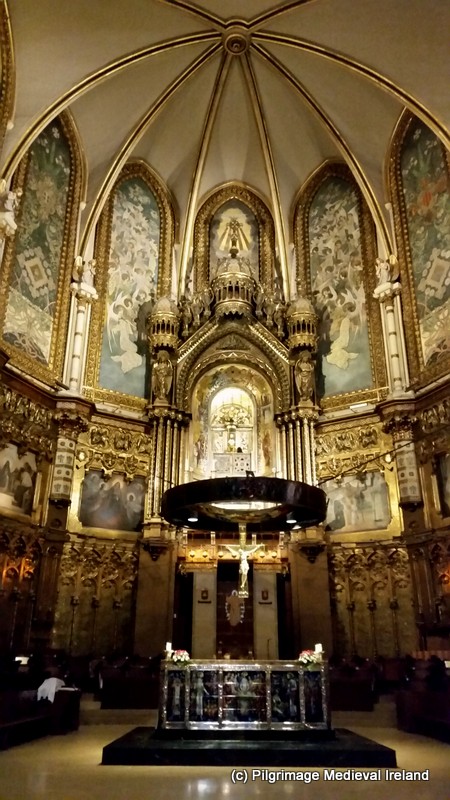 High altar within the basilica church.

Stairs leading to the shrine of the statue of Our Lady of Monserrat.

The shrine is very elaborate and  its walls are covered in gold mosaic and marble. The ceiling depicts the four archangels.

View statue from top of stairs

The statue  of Our Lady of Monserrat is  Romanesque, polychrome statue  95cm (38inch) in height. The statue depicts Our Lady in Majesty. Mary is in a seated position with the Christ Child seated on her lap. In her hand she holds a sphere  which symbolized the universe. Her left hand is placed on the Christ Child’s shoulder and is symbolic of his omnipresence. The Christ Child holds a pineapple in his hand  the symbol of  eternal life, with his other hand he offers a blessing. The image is popularly known as La Moreneta (the Dark One), due to the dark colour of the Blessed Virgins skin, a result of age and  centuries of candle smoke. Pope Leo XIII proclaimed Our Lady of Montserrat Patron Saint of Catalonia in 1881.

Ceiling of the shrine of Monserrat from http://www.montserratvisita.com/en/virtual

The shrine of Our Lady of Monserrat taken from http://www.montserratvisita.com/en/virtual

The statue in turn sits within a silver shrine. According to the Monserrat website

In 1947, the image was enthroned in a silver altarpiece, paid for by popular subscription and installed in the upper section of the basilica apse. 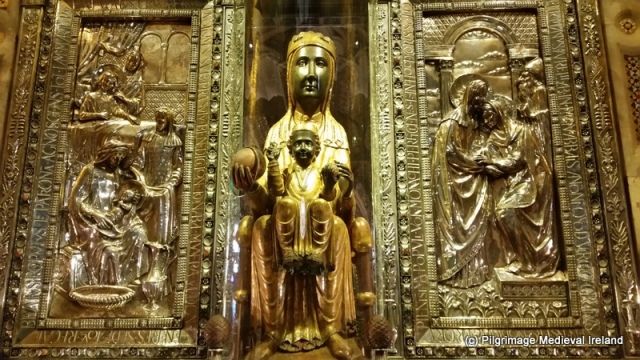 Our Lady of Monserat behing glass

Today the statue is  protected behind glass. There is an opening for the globe held in Mary’s hand.  This opening allows the globe to be accessible to devotees. Modern pilgrims will often touch, kiss, rub rosary beads and cloth against  he globe it as they pray before the statue. 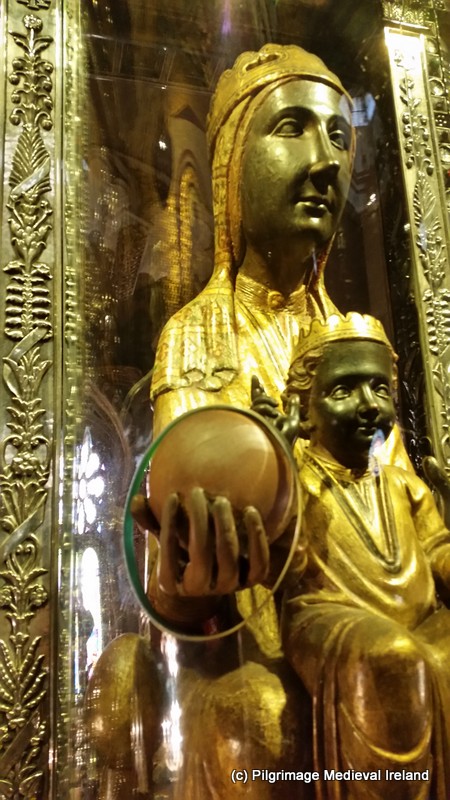 The statue of Our Lady of Monserrat  holds a globe symbolizing the cosmos in her hand.

The statue looks out  the basilica church.  It must be quiet a sight  to see the church full with pilgrims. 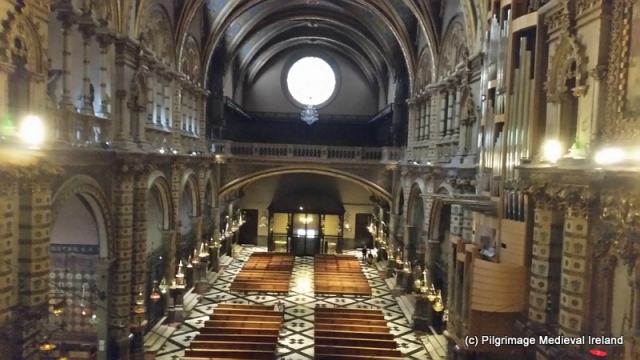 Monserrat has been a pilgrim destination from at least the twelfth century when the current statue was created. Many miracles  were recorded in medieval times and Alfonso X el Sabio in the thirteenth century  recorded some in Cantiagas de Nuestra Señora (Talbot 2010, 454). Throughout the late medieval period the statues was visited by countless pilgrims including St Ignatius Loyola.

In recent centuries the shrine has had a more turbulent history. The monastery was sacked by Napoleon in the early nineteenth century destroying much of the medieval fabric luckily the statue survived after being hidden by the monks. In the twentieth century 23 custodian monks were shot during the Spanish Civil war. Today the site continues to attract pilgrims and it is also one of the most popular tourist destination in Catalonia.

The side chapels and the grounds of the monastery are filled with wonderful sculpture by Spanish artist. If you follow this link it will you can experience a virtual tour of Monserrat Cathedral and shrine. 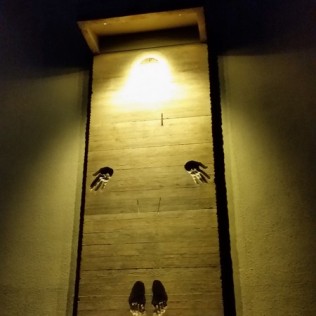 Resurrection of Jesus Christ, by Josep Maria Subirachs in the Chapel of the Holy Sacra- ment

Crucifixion side chapel at Monserrat Bascilica 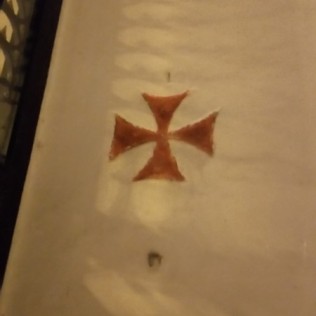 Montserrat is also famous for the boy’s choir called  L’Escolania who trace their history back to 1223 .  The Boy’s Choir performs at least two times a day for most of the year at the Montserrat Basilica they also give concerts around the  world . They specialize in a type of singing known as Gregorian chanting.

Part of the Medieval Cloister at Monserrat

Replica of Medieval Cross at Monserrat