The town of Cahir one of the stops on the  The Butler Trail,  a new historical trail that links three of Tipperary’s medieval towns Clonmel, Cahir and Carrick-on-Suir  and a series of historic sites associated with the Anglo-Norman Butler family.

The town of Cahir is probably best know for its magnificent castle which attracts thousand of tourist each year. The castle has also been used in the filming of movies and TV series such as the Tudors.

The town also has some beautiful medieval churches which are often overlooked. This post will focus on the impressive  remains of St Mary’s Priory, known locally as Cahir Abbey. 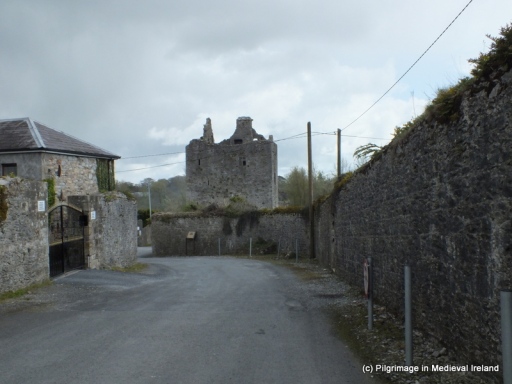 The priory is located a  short distance from the castle past the Supervalu and Aldi supermarkets,  on the Limerick road out-of-town. The Augustinian Priory of  St Mary’s  is situated on the banks of the river Suir opposite Cahir Saw mills and can be approached  from the main road by a small lane.

The priory  was  founded c.1220 by a Norman knight named Geoffrey de Camvill and given to the order the of the Augustinian Canons Regular (Gwynn & Hadcock, 1970, 162).  In 1540 the prior Edmund Lonergan surrendered the monastery to Henry VIII (ibid). It appears that at the time  the main monastic church   was being used as a parish church so it was not taken by the crown  but the surrounding  monastic buildings  were granted to Sir Thomas Butler the Baron of Cahir ( Hodkinson 1995, 148; Farrelly 2011).

If you want to find out more about the priory’s history  see Hodkinson’s article  The medieval priory of St Mary’s, Cahir  in the journal of the Tipperary Historical Society (reference below). 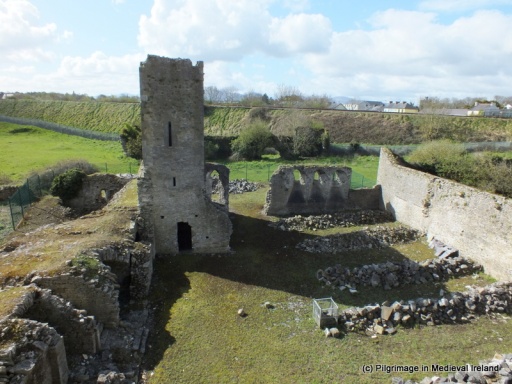 Cloister and  domestic buildings on the south side of the Church

Today the remains of the  priory consist of a church with a large tower , a cloister  and  domestic buildings on the south side of the church. Like many  medieval buildings  St Mary’s priory is a multi phased, with evidence of the original 13th century buildings  and further alterations and additions  in the 15th and 16th/17th centuries.

Today  priory church is entered through two doors in the north wall. The western most door is a simple pointed limestone door. On either side of the interior of the door are  two elaborate masons marks. Masons mark are marks made by  medieval stonemasons who cut the blocks, built walls, carved windows in medieval building. Each mason had his own distinctive mark and some like those at Cahir priory were very elaborate .

Western most masons mark inside the door in the north wall

There are a number of masons marks scattered throughout the building so keep your eyes peeled. Today the church consist of a large chancel and a  5 story tower, which appear to have been remodeled in the 15th -16th century. The tower is  built over the crossing where the nave and chancel would have joined. The nave  is no longer extant  and Farrelly (2011) suggests the nave may have been  destroyed when the tower was remodeled.

The windows are a mix of carved limestone and  sandstone. There are two very elaborate 15th century windows, one in the east gable of the church and the other in the north-east end of the north wall. The  windows are carved of limestone and decorated with  hooded molding  and the carved heads of clerics. 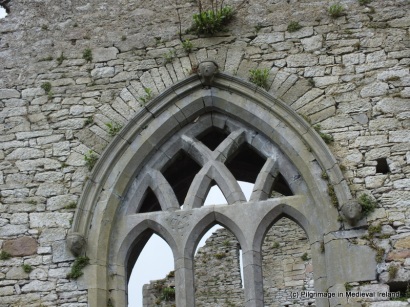 The exterior of the east window in the east gable

The east window is  very ornate and the exterior has hooded molding with three carved heads and a  large  masons mark of a Celtic knot . 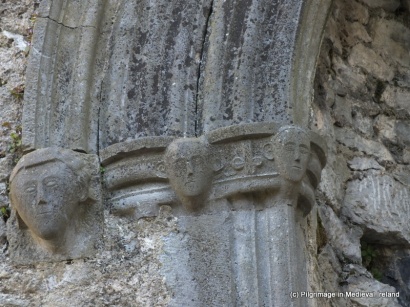 Detail of the carved heads in the interior of the north-east window of the church.

The church tower  is  very well-built and is  accessible to the public. 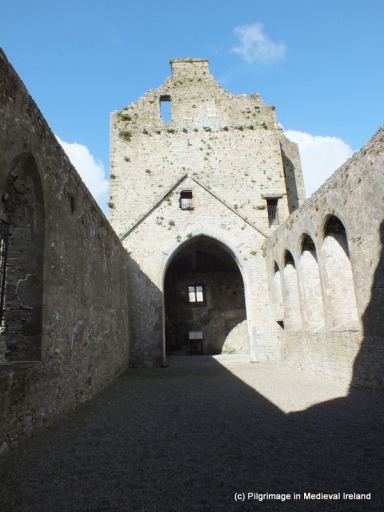 Facing west view of crossing tower from within the church

The tower  is entered through a  carved limestone pointed doorway. 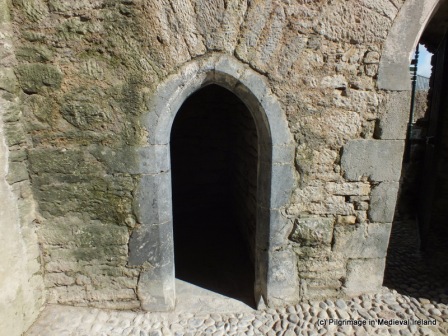 To get to the upper stories of the  tower you climb a finely carved  spiral staircase. The steps are a late addition and  are surprisingly wide and easy to climb compared to  narrow steps of earlier stairs at other monastic sites and castles.

At the top of the stairs  is a rounded  ceiling.   There is evidence of  the wicker work frame used to support the ceiling as it was being constructed in the plaster.

Ceiling at top of stairs

The upper floors are accessed through a pointed doorway at the top of the stairs. 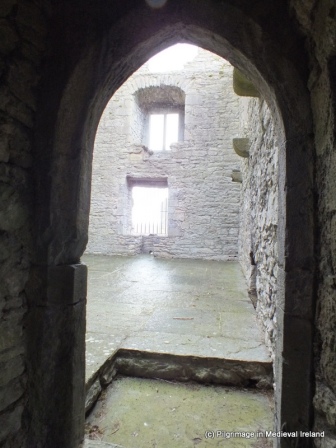 Doorway leading into the upper floors of the  tower

As you enter this floor look down at the base of the door and there you will see  a fine example of  a masons mark.

The upper floors of the building were likely used for domestic purposes and two fine examples of fire places are seen in the  east wall.

The windows of the tower offer fantastic views  of the church and the other monastic buildings. The  monks would have  had access to the cloister and its surrounding buildings through a doorway, now blocked up, in the  south wall of the chancel.  At present the buildings  surrounding the cloister are not accessible to the public.

The following photos were taken a  few years ago .  Along the east side of the cloister area are a series of vaulted rooms and south of these buildings is  another  a barrel-vaulted room which may have functioned as the chapter room (Farrelly 2011). 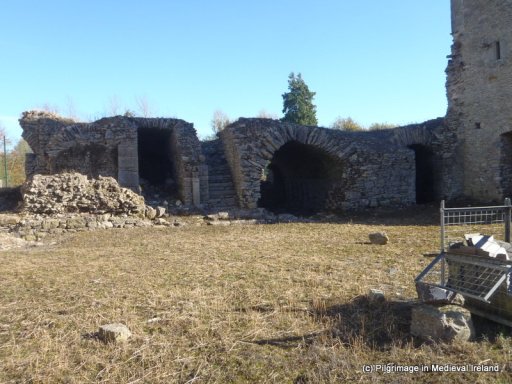 Vaulted room on the east side of the cloister

At the south-east corner of the cloister  is a tall narrow 4 story high tower which was used as a domestic building . 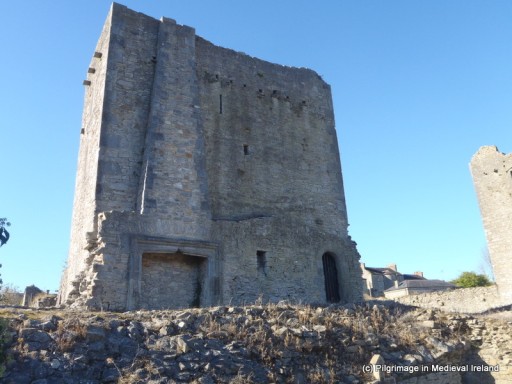 Another building possibly a refectory was built on to the west side of this tower . Part of the south wall remains. This wall has three sandstone windows.

Tower and wall of refectory

Like the church the domestic building were also altered in the 15th century.

The priory is surrounded  by a 19th century graveyard on the north and east side and it was here that I found a bullaun stone. The stone originally  had three hollows, one intact and two damaged.  As I have mentioned in previous posts,   bullaun stones are believed to be early medieval in date and may in some case have been associated with pilgrims.

There is also a holy well know as Lady’s well a short distance away but time did not allow for a visit and I plan to return soon   to find the well and will post more information then. This post has only really just touched on the story of the priory, its history and its complex architectural remains but I hope it has given you a taste  of what  a wonderful place it is and you might be encouraged to visit and read more.