Each year thousands of tourist come to to the town of Cahir in Co Tipperary  primarily to see the wonderful castle.

The town has many other amazing historic sites including  St Mary’s Priory and St Mary’s parish church.

St Mary’s  church  is  tucked away at the bottom of Chapel Street just off the town square. The church sits at the centre of a large historic graveyard, entered through an imposing gateway with large limestone built pillars.

Entrance to St Mary’s church and graveyard in Cahir

The  church is a multi-period building, rectangular in shape. The  change and nave are divided by a chancel arch. This was the medieval church for the town and  the reformation   the building was used as a place of worship by the established church  and continued as such until 1820 (Killanin and Duignan 1967, 133). Interestingly Catholic  worship also continued here too and the church was divided to accommodate both Protestant and Catholic worship (Farrelly 2011).

The church building is of multi-period date. Some of the  fabric  dates to the 13th-century  and there is also evidence of extensive rebuilding in the 15th/16th century.  The church has a number of interesting features. The western end is dominated by a double bellcote.

The east gable has traces of early windows. These windows were  replaced in the 15th/16th century by a mullion and transom four-light limestone window. This window  has three interlace patterns, possible masons marks, carved on the external side of the masonry. The interlace patterns are very similar to others found at Cahir Priory  and the Augustinian Abbey in Fethard. 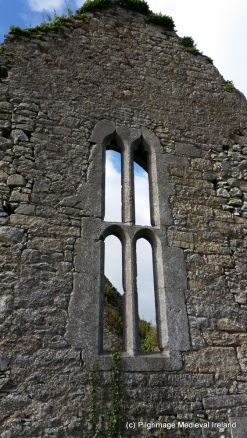 Window in the east gable of St Mary’s church Cahir

The interior of the church is filled with  modern burials  and their are a number of interesting architectural features such as  a corbel depicting the head of a cleric and a finely carved piscina. Following the reformation the church was later altered and divided to accommodate both Protestant and Catholic worship (Farrelly 2011).

The corbel  with the head of a cleric is my favourite feature at the site. It is very finely carved but the nose and mouth are now damaged. 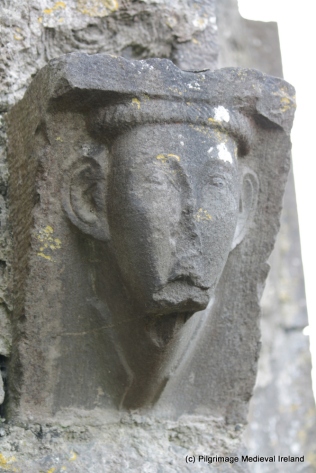 Here are some photos of the rest of the church.

The graveyard that surrounds the church has many interesting historic graves which I think deserve a post of their own. This would be a wonderful graveyard for Historicgraves.ie project.