Today the 31st of December is the feast of St Sylvester who was the chosen pope in succession to Pope Miltiades (311-314) and his pontificate also coincided with the reign of the first Christian emperor, Constantine.

In the town of  Malahide in North County Dublin there is a holy well along with the modern  Catholic Church dedicated to St Sylvester.  The church built-in the 1800’s takes its dedication from the holy well. Antiquarian sources relating to the well  provide some debate as to the patron of the well.  Some feel its St Sylvester whose feast is on the  31st of December and his cult was introduced by the Normans, others argue its a Bishop Silvester, a holy man associated with the fifth-century Christian mission to Ireland. I will have to look into the patronage of the well some more when time allows. 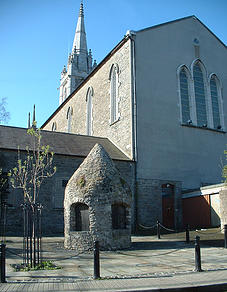 The well was also known as Sunday’s Well and Lady’s Well, the later  being derive from devotions at the well on the 15th of August. The site of the well was marked on John Rocque’s map of 1756 unfortunately the  dedication of the well was not recorded.

Pilgrimage to the well has now died out  but in the past the traditional day of pilgrimage was the 15th August when a pattern day was held at the well. The Malahide Heritage website notes that

The Malahide well, like many others, became associated with the Blessed Virgin Mary, and a patron or pattern was held there regularly on the 15th August. On this date the well was decorated and the statue of the Blessed Virgin was decked with ribbons. There is a theory that the statue used was Our Lady of Malahide, associated with the Oak panel carving of the Assumption in Malahide Castle. During the patterns, the well was circled seven times, while reciting a special prayer or rann. At these 15th August patterns, worshippers gathered from many miles distant. The tradition of reciting prayers whilst circling the well on 15th August was revived in recent times. 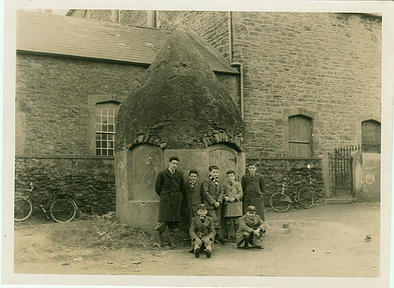 The waters of this well were held to have curative powers and up to the close of the 1890’s, an eel was inserted into the waters of the well to purify it. Many wells around Ireland are said to be inhabited by a sacred fish or eel. In most cases the tradition is that if one sees the fish/eel in the well ones prayers will be granted or cures received. St Sylvester’s well  is the only well I have come across where an eel was regularly placed in the waters, all in accounts of wells and eels from other wells the eel seems to be in residence within the well.

I am intrigued by this well so will investigate further in the coming months and see if I can find out anymore historical information about the well. In the mean time for further  information see the list of references below.