A few months ago I came across some wonderful images of pilgrims climbing Croagh Patrick. These images were taken some time in the first decade of the 20th century. The photographs were assembled by Fr. Angelus Healy OFM Cap. (1873-1953) a Capuchin friar known as the ‘Guardian of the Reek’, in honour of his long association with the pilgrimage. The images  have recently been digitised from a collection of glass plate negatives held in the  Irish Capuchin Provincial Archives, and the archives  have kindly given me permission to reproduce the images for this blog post.  I recommend a visit to the Irish Capuchin Archives Facebook page  were you will find wonderful images and documents associated with early 20th century Irish history.

The photos reminded me of a contemporary account I had read some years ago of a pilgrimage to the summit of Croagh Patrick  undertaken in 1910, on the main pilgrimage day to the mountain, the last Sunday of July often called Reek Sunday. The story of the pilgrimage was  recounted in the article entitled ‘A Pilgrimage to Croagh Patrick’ and was written by a cleric who gives his name as E.O’L and was published in the Irish Monthly magazine.  The article recounts the priests ascent of the mountain, the weather conditions and encounters with pilgrims.  I have climbed Croagh Patrick a number of times most recently on  Reek Sunday in 2014 and it struck me that the 1910 account has a number of parallels to  the modern pilgrimage in particular the  physicality of journey to the summit, the dangers faced by pilgrims and weather conditions.

I found it very interesting that the article advises against wearing poor footwear when climbing this holy mountain and over a hundred years later this advise is still sound. I have often seen pilgrims and tourist attempt to climb Croagh Patrick in flipflops  or other inappropriate footwear or clothing. Mayo Mountain rescue advises those planning to climb Croagh Patrick and other mountains in the area to wear appropriate clothing and footwear  and to be aware that temperatures at the top of the mountain can be up to 10 degrees colder than at sea level.

Low, thin-soled shoes are not the thing where one frequently sinks above the ankles in  wet, boggy turf loam, and ladies’ fashionable high-heeled  boots are, to say the very least of them, quiet at a discount where loose, sharp  rocks and stones, and heaps of them, covering  long and steep stretches of the ” Pilgrim’s Path,” have to  be got over somehow (E. O’L 1910, 539)

The article advises gentlemen in 1910 to wear

…good, thick-soled boots (not shoes), with a few spikes or nails to prevent slipping, leggings of some sort, a light, rainproof cape, and a good, long, reliable walking-stick or pilgrim’s staff (E. O’L 1910, 539).

With regard to a suitable dress or outfit for ladies, we shall attempt to give only very little and very negative advice, namely, in the first place, not to wear light-soled, high-heeled shoes or boots; and, in the second place, not to wear over-long skirts, which cling about the feet, and, when the mountain is wet under foot or when there is rain and mist (which seems to be oftener the case than not), soon become very bedraggled and uncomfortable (E. O’L 1910, 539).

morning broke dull and grey, and heavy rain clouds and mist and fog enveloped and concealed the upper heights of the holy mountain almost all day long (E.O’L 1910, 587).

View of Croagh Patrick from base of the mountain covered in cloud and mist.

Traveling with companions, he left Westport by car  and  traveled on  to Murrisk.  En-route the group passed

group after group of young and old, boys and girls, men and women, on foot, all walking with zealous haste towards the holy mountain ; great numbers of cyclists also were to be seen, and a long line of brakes and cars of every description. Still everything was quiet and orderly, and the demeanour of the people was simply admirable (E.O’L 1910, 390).

Upon arrival at Murrisk the group immediately began their ascent of the mountain along the pilgrim path known as the Casán Phádraig/St Patrick’s path.

Pilgrims beginning their ascent of Croagh Patrick circa 1910. Image courtesy of the Irish Capuchin Provincial Archives.

Large numbers of pilgrims were already climbing the mountain and the scene described below is very similar to that of the modern pilgrimage on Reek Sunday.

Lifting up our eyes we saw before and above us an irregular and unbroken line of pilgrims winding, in long curves, up the mountain slopes, and higher up still, on an elevated ridge of the mountain leading to the cone proper, we could clearly see the unbroken line of pilgrims slowly advancing and silhouetted sharply against the sky-line; and higher and higher up still they could be seen, until they passed on into the heavy clouds, which hid them and all the upper reaches of the holy mountain from our sight (E. O’L 1910, 591).

Pilgrims climbing Croagh Patrick circa 1910. Note the ladies in their long skirts in the foreground. The image is courtesy of the Irish Capuchin Provincial Archives.

The modern pilgrimage as we know it derives from efforts made by the  Archbishop of Tuam Dr. Healy in 1903 to revive the pilgrimage which was at the time in sharp decline. Dr Healy was also responsible for building the oratory on the summit of the mountain.  The numbers of pilgrims have steadily increased in the last hundred years  but in 1910 the pilgrimage was popular enough to attract pilgrims in their thousands.

Pilgrims taking a brake while climbing Croagh Patrick circa 1910. Image is courtesy of the Irish Capuchin Provincial Archives.

Until the 1970’s it the was the norm for a large portion of  pilgrims on Reek Sunday to climb Croagh Patrick by torch-light the night before or in the hours before dawn.

An hour into the climb E. O’L and his companions

began to meet many of those who had already been to the summit and were now returning. Some of the older people had gone up the evening before, and had spent the night on the mountain side, or praying around the Oratory on the summit, and indeed they must have suffered greatly throughout that wet and dreary night, and no wonder they should look weary and faint and worn after having been ” buffeted at will by rain and storm ” all night long during their vigil on such a wild and shelterless mountain.

Bravo ! you’re getting on grand, you have only a few hundred yards more to climb,” or, ” Take your time, alanna, and you’ll soon be at the top,” etc.

Modern pilgrims to Croagh Patrick on Reek Sunday will often give words of encouragement to those ascending the mountain.

Croagh Patrick can be a dangerous mountain much of the route, in particular the latter stages along the conical top  of the mountain, is covered by loose shale which moves under foot and can be very slippery in wet weather.   The terrain is difficult especially in the final stages. Each year people fall, sprain and brake limbs while ascending and descending the mountain. So it’s not surprising that in 1910 the group also  met a man ‘with a handkerchief tied around his head and blood oozing from underneath it‘, who had slipped and fell among the rocks  while descending the mountain. The video below shows the pilgrimage on Reek Sunday on a day with similar weather conditions  to those described in 1910 and it highlights how dangerous the climb can be and the amazing work that Mayo Mountain Rescue and the Order of Malta do to help pilgrims on this day.

The author and his companion reached the summit

clothes drenched with rain, our feet wet, our boots and lower garments covered with clammy turf-mould.

Pilgrims descending Croagh Patrick is wet and overcast conditions, similar to those described in the article.

As is the case with Reek Sunday today mass in St Patrick’s Oratory and confession was a big part of the pilgrimage rituals  in 1910.

The priests who said their Masses early heard a good many of the pilgrims’ confessions afterwards, and at the time we entered the little Oratory of Templepatrick, rows of pious pilgrims were receiving Holy Communion, and there were pilgrims for Communion at Masses until mid-day (E. O’L 1910, 593).

the priests who wished to say Mass on the summit entered their names in a register kept at the presbytery, Westport, and both the hour and the altar at which each priest was to say Mass in the Oratory were appointed (E. O’L 1910, 585).

Pilgrims on the summit of Croagh Patrick circa 1910. Courtesy of the Irish Capuchin Provincial Archives.

After their masses the group enjoyed

some sandwiches and a warm cup of tea nicely prepared… by two or three young ladies from the Technical School, Westport (E.O’L 1910, 593).

On my pilgrimage in 2014 I noticed  many pilgrims bought a packed lunch and others bought refreshments and tea from the stalls on the periphery of the summit. 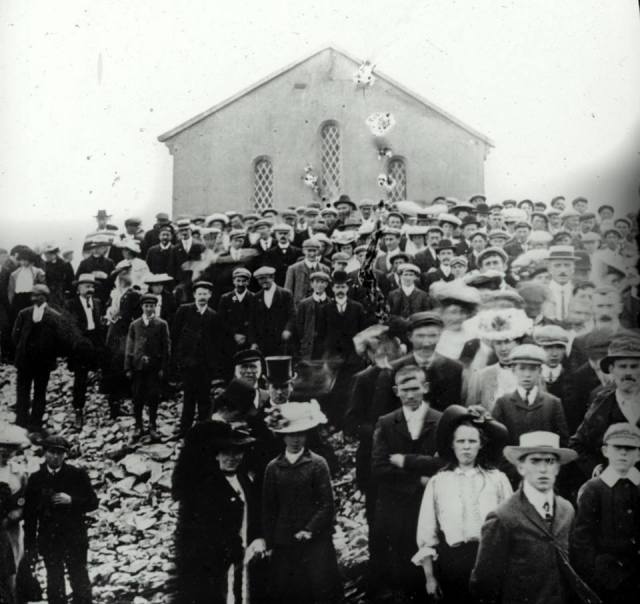 Having enjoyed the refreshments and

listened to the excellent sermon of the Very Rev. Father M’Grath for the occasion, and having received the special Papal Benediction at its close, and after hearing the Acts devoutly read in Irish before the twelve o’clock Mass, we began our laborious descent, in fog and rain, over loose rough stones and through boggy turf-mould and slush, and our heads were moved with compassion especially for the poor weary pilgrims struggling up against us, and we consoled and cheered them as best we could…. (E. O’L 1910 594).

As they descended the cone

the clouds and mist all cleared away quite suddenly, or rather we had left them behind or above us. The sun shone out brilliantly, and land and sea and sky all seemed to rejoice with and for us on our happy and safe return from the Holy Summit. And looking down upon the pleasant land of promise that lay basking in the sunlight far below us, the hardships of the mountain and the wilderness were very soon forgotten (EO’L 1910 594).

View of the summit of Croagh Patrick covered in cloud and fog. Image taken from the Tóchar Phádraig pilgrim path in 2008.

I hope this post by combining early 20th century and modern images with an early account of pilgrimage gives you a sense of what it was like to be part of the pilgrimage to Croagh Patrick in 1910. It is also interesting to compare the dress of the pilgrims, the ladies in long skirts and fancy hats, the men dressed in suits some even wear top hats, it’s a far cry from waterproof jackets  and hiking boots worn by the majority of modern pilgrims. We also see that then as now some pilgrims performed their pilgrimage barefoot. Yet we are also reminded  while clothing has changed the modern pilgrim walks along the same path and endures the same physical hardships and weather conditions as those who have gone before.

Pilgrims on the summit of Croagh Patrick circa 1910. Image courtesy of the Irish Capuchin Provincial Archives. 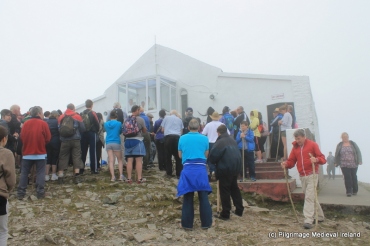 Pilgrims on the summit of Croagh Patrick 2014

Images from the photographic collection of Fr. Angelus Healy OFM Cap. (1873-1953), now part of the Capuchin Archives collection. Reproduced in this blog courtesy of the Irish Capuchin Provincial Archives.

6 comments on “Pilgrimage to Croagh Patrick in 1910”