Being Christmas week this  post has a Christmas theme and provides a  brief overview of the relics of the nativity venerated by medieval pilgrims. 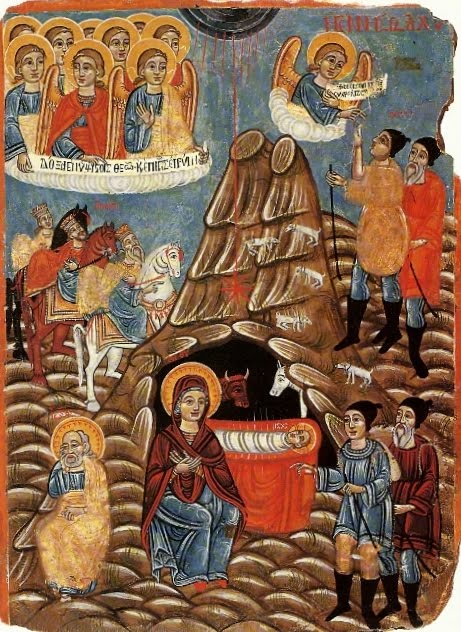 The Holy Land was the ultimate destination for medieval pilgrims, it was here that Jesus Christ  was born, lived, died and was resurrected.   So you could say, the  pilgrims who came here were spoilt for choice,  having access to wide range of sites associated with the New and Old Testament and the life of Christ.

Bethlehem,  the birthplace of Jesus,  was a must see for medieval pilgrims and many would have timed there visit to coincide with Christmas. 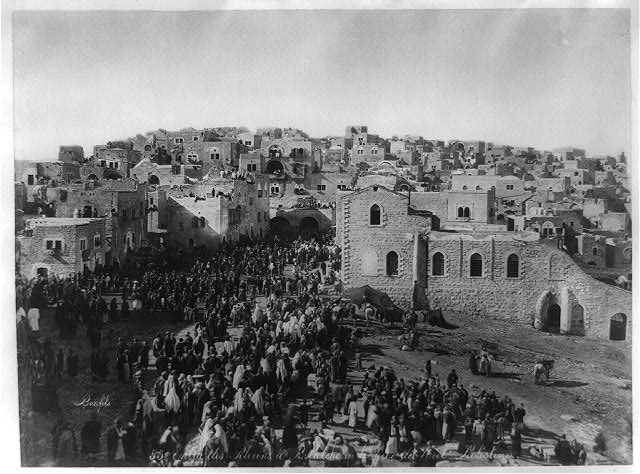 Within the town of Bethlehem, the traditional site of the  birth of Christ was marked by the Church of the Nativity.

The church was built over a cave that was believed to be the manger where Christ was born.

Pilgrims were flocking to Bethlehem from the 2nd century AD.  The  Church of the Nativity was commissioned in 327 AD by the Emperor Constantine and his mother St Helena.  This first church was not completed  until 339 AD and  it was later destroyed during the Samaritan  revolts in the 6th century.  The current church was built on top of the aforementioned  one in 565 AD by the Emperor Justinian.  This link will take you to a  3D virtual tour to the current   Church of the Nativity in Bethlehem. 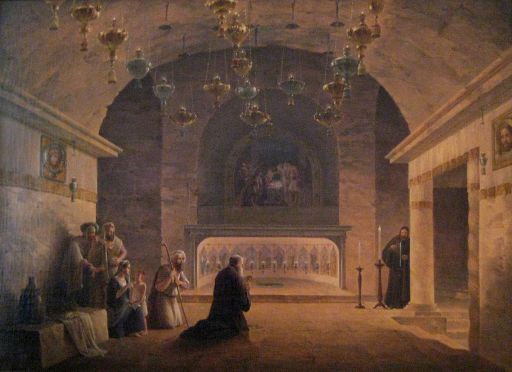 View of Church of the Nativity in 1833 by Maxium Vorobiev (from http://en.wikipedia.org/wiki/File:Nativity_vorobiev.jpg)

Today the church is a UNESCO Heritage Site.

Since early medieval times the Church has been increasingly incorporated into a complex of other ecclesiastical buildings, mainly monastic. As a result, today it is embedded in an extraordinary architectural ensemble, overseen by members of the Greek Orthodox Church, the Custody of the Holy Land and the Armenian Church, under the provisions of the Status Quo of the Holy Places established by the Treaty of Berlin (1878). (UNESCO Website)

In modern times Christmas services for Roman Catholics and Protestants are celebrated on Christmas eve and Christmas day, the 25th of December. The orthodox Churches ( Coptic, Greek, etc) celebrate on the 6th of January and the Armenian Orthodox on the 19th of January.

One of the early pilgrims to Bethlehem was St Jerome who visited here while on a pilgrimage around the Holy Land,  before taking up permanent residence  in 386 AD. While living in Bethlehem he  set up a monastery and pilgrim hostel to help provide hospitality to the pilgrims who were visiting here. 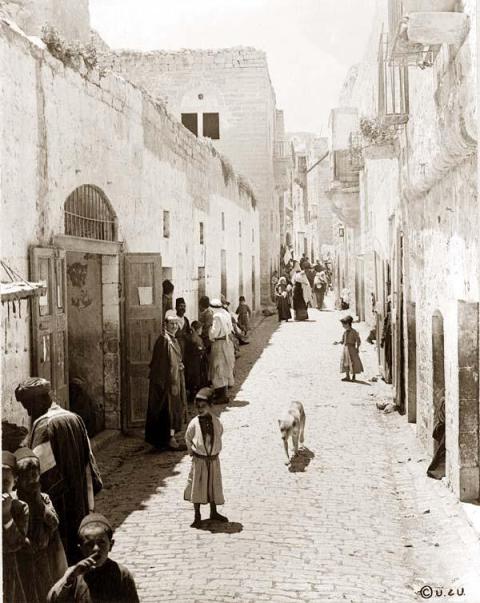 The main street leading from the Church of Nativity, Bethlehem circa  1880 (http://www.old-picture.com/american-adventure/Bethlehem-Street.htm)

Bethlehem was a  small quiet place and was described  circa 1231 AD as having only one street.  This must  have provided pilgrims with a nice change from the hustle and bustle of  Jerusalem. The pilgrims who travelled here often  came on donkeys  as did the English pilgrim Margery Kempe in 1413 AD ( Chareyron 2005, 102). In the late medieval period pilgrims entered the church in a processional order signing hymns and carrying a lighted candle (ibid).  The pilgrim Jean Thenaud arrived here bearing gifts of gold, frankincense and myrrh and was greeted outside the shrine by candle-sellers . He describes his visit as follows

Pilgrims entered “a small room with a vault of fine marble and mosaic”. There beneath the rock, was the place where the Lord was laid, the crib for the ox and the ass, and the rock itself the place for the nails that held the rings for tethering the animals and the hole through which the star that guided the Magi was said to have  disappeared and the place where they worshipped Him (Chareyron 2005, 103).

Irish evidence for pilgrimage to Bethlehem

Pilgrims did not have to  travel  as far as the Holy Land  to venerate the birth of Christ,  as relics of the nativity, ranging from hay from the manger to the shift the Blessed Virgin gave birth in,  were to be found at shrines across European. The following   is a snapshot of some of these relics.

The Relics of the Magi at Cologne

The cathedral church of Cologne in  Germany held the  relics of the Three Magi  and was a major centre of pilgrimage in the late medieval period. Located on a number of important trade route including the River Rhine the city attracted vast numbers of pilgrims each year.

The reliquary of the Three Magi at Cologne Cathedral (image taken http://en.wikipedia.org/wiki/File:Cologne_Cathedral_Shrine_of_Magi.jpg)

According to the Gospel of Mathew the ‘Magi’ were three Kings from the east who journeyed to Bethlehem following as star to pay homage to the ‘one who has been born king of the Jews’. The Magi were also the first Christian pilgrims.

So how did the  Three Magi end up in Germany? According to legend the corporeal relics of the Magi were discovered by St Helena (mentioned above), the relics were translated to the church of Saint Sophia at Constantinople and at a later date were brought to Milan. In 1160 AD following the sack of Milan, Frederick Barbarossa brought the relics  from the Basilica de Sant’ Eustorigo to Cologne.  Later an elaborate reliquary of gold silver and enamels and precious stone was  constructed to hold the holy relics. The reliquary was commissioned by Philip von Heinarch Archbishop of Cologne (1167-1191)  and made by Nicholas of Verdun.   Pope Innocent IV granted a plenary indulgence to Cologne in 1394 AD which was an additional attraction for pilgrims to visit here.

Chaucer’s Canterbury Tales  tells that the wife of Bath  had travelled  thrice to Jerusalem and once to Cologne implying the shrine was well-known to English  pilgrims.

Irish devotion to the Thee Magi  is represented in Irish medieval sculpture for example the  east face of Muiredach’s High Cross at Monisterboise,  has a depiction of the Adoration of the Magi.

The Adoration of the Magi on the east face of Muiredach’s High Cross (image taken http://ireland.wlu.edu/cross/Muiredach/east/5.htm)

The Adoration of the  Magi is also represented  on the gable  of Ardmore Cathedral church.  Also one of the alters at the Franciscan Friary in Waterford city was dedicated to the Three Magi.

The fifteenth century tomb  at Strade abbey in  Co Mayo depicts the Three Magi, St Thomas á Beckett, SS Peter and Paul and the figure of pilgrim  kneeling. It is very likely that the iconography of the tomb  indicates the deceased had been on pilgrimage to Cologne, Canterbury and Rome.

Relics of the Nativity at Aachen

Approximately 61km from Cologne is the shrine of Aachen, another very popular European pilgrim shrine.  Aachen  had a miraculous image of the Virgin Mary along with a number of relics of the nativity. The relics included the nightgown worn by the Blessed Virgin, the swaddling clothes of the Christ Child, the loin cloth of Christ and  a cloth that the decapitated head of St John the Baptist was laid on.  It was also the burial-place of the Emperor Charlemagne who was canonised in 1165 AD and the cathedral also possessed the relics of St Ursula.

Marienschrein (1238)/The shrine of Mary, contains the relics , shift of the Blessed Virgin, the swaddling-clothes of the Infant Jesus, the loin-cloth worn by Christ on the Cross, and the cloth on which lay the head (image taken from http://en.wikipedia.org/wiki/File:Aachen_cathedral_007.JPG)

Many high status pilgrims travelled here and the Queen of Hungary came to Aachen in 1337 AD, with an escort of 700 knights.

Aachen  became an immensely popular pilgrim site and attracted so many pilgrims  it became tradition  to display the relic  every seven years for 15 days,  between the 10-24th of July, on  the Aachener Heiligtumsfahrt.  This is a tradition which continues to  present time. The first  “Heiligtumsfahrt” (pilgrimage) took place in 1349 and 2014 will be the date for the next. To give you some idea of the shrines popularity, in 1496 AD the gatekeepers counted  147000 pilgrims  entering Aachen during the 15 days the relics were on display. It was said the pilgrims left 85000 gulden at the shrine (Chunko 2009, 1-2). The shrine also offered a plenary indulgence to pilgrims.

The well known  English pilgrim Margery Kempe made pilgrimage to here in 1433 AD  when she travelled  on pilgrimage from Danzig to Wilsnack and on to  Aachen,  where she saw the ‘virgin’s smock’.

The shrine also sold pilgrim badges  depicting the relic of the Virgins nightgown/shift. These badge began to be made from the 1320s  and some of these badges have turned up in archaeological excavations in London.

The cathedral church at Chartres in France possessed the Sancta Camisa the shift worn by the Blessed Virgin when she gave birth to the Christ child. The relic was given to the church in 876 AD by Charles the Bald, who had brought it here from Constantinople.  It was enclosed in a reliquary shrine called the Sainte-Chasse and many miracles are associated with this relic.  Most pilgrims came here for the Marian feast of the Presentation, Annunciation and Assumption and the feast of the Nativity of the Virgin.  As at Aachen pilgrim badges depicting the holy garment were sold to pilgrims in  the later medieval period.

The relic of the Virgins nightgown at Chartres cathedral (image takenhttp://sites.tufts.edu/textilerelics/2011/02/08/marian-relics/)

Other Relics of the Christ Child

Rome with its vast collections of relics also had relics of the Nativity. The church of St Maria Maggiore possessed part of the crib in the form of boards from the manager. The board  are believed to have supported the crib used by Christ and  were brought here by Pope Theodore (640-649)  from the Holy Land.

Another Nativity relic was found at the Archbascilica of St John Lateran where a section of the ‘Holy Umbilical Cord’ of Christ was kept. The last milk tooth of the Christ Child was housed at  the abbey of Saint Médard at Soisson  in France. Finally up to 8- 14 churches claimed to possess the Holy Prepuce/ Foreskin of Christ .  These churches include Antwerp, Coulombs, Chartres, Charroux, Metz, Conques, Langres, Anvers, Fécamp, Puy-en-Velay, Auvergne, Hildesheim, Santiago de Compostela and Calcata.

Closer to home  Christchurch Cathedral in Dublin  had in its  relic collection  a fragment of the crib while  Reading Abbey in England had another  a relic of the umbilical cord and Our Lady’s Shrine at  Walsingham, also in England attracted pilgrims to visit relics of Mary’s milk.

The birth of Christ  was one of the most important feasts in the Christian calendar and each year it was celebrated  by  Christians with special liturgy and nativity plays.  There was great devotion to the Christ Child and the Blessed Virgin in the Medieval world.   Christmas time would have  inspired  some to take their devotion further by embarking on a pilgrimage to either the Holy Land or one of the many relics of the nativity which were scattered across Europe.  As most people preferred not to travel in Wintertime most would have stayed at home for Christmas and planned their pilgrimages for Spring or Winter.

Birthplace of Jesus: Church of the Nativity. http://whc.unesco.org/en/list/1433