On Monday evening last on mid summers day  I headed to the annual  pilgrimage at St John’s holy well on the slopes of Mushera Mountain.  So after work armed with directions from my friend Cork based archaeologist Flor Hurley, I headed off to find the well and got very lost …. Nothing to do with Flor’s directions and a bit to do with my bad sense of direction  but I  did find my way eventually. My short unplanned diversions helped me to appreciate  that this is truly a beautiful part of the country. I noticed a lot of signposts for wedge tombs, stone circles and standing stones in my travels  so I will have to take a trip back to do some exploring.

The holy well sits at the edge of a forestry plantation close to the road through the mountains.

The well is a natural spring that is cover by a large grotto.   Within  is a statue niche with a large statue of St John. There were lovely bunches of wild flowers and  some cups left beside the statue. The well is accessed through a rectangular opening below the statue and I noticed that some coins had been thrown in. There was also a box for petitions or notes what would be written by pilgrims to ask the Saint to intercede on their behalf.

Statue of St John and recess for access to Holy Well

A circular area has been tarred in front of the grotto/well and  twelve stations of the cross are found along the edge of this area. This circular area is linked to a lower car park and the main road via a small tarred roadway.

The modern grotto was erected in the 1950’s and the car park and stations of the cross are also a recent creation. There are a number of benches which have been donated by families in memory of loved ones which make for a peaceful place to sit.

The site looked very different  in the past as this photo from the 1920s shows  it consisted of a small corbelled structure set in heath land. 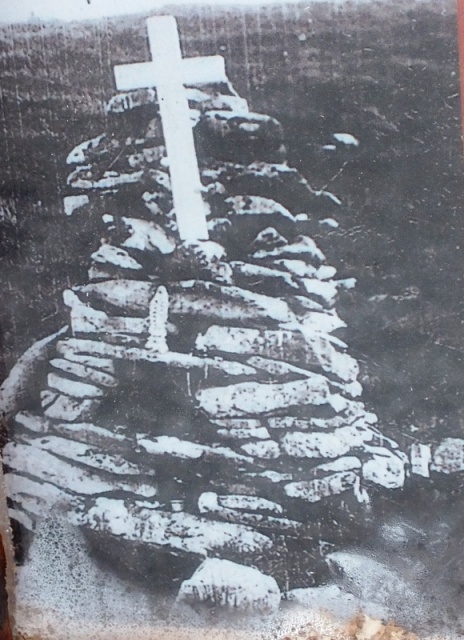 Traditional Stations at the Well

Those partaking in the traditional pilgrim rituals at the well  are said to be “paying of the rounds” this is an expression I haven’t heard before as  at other well sites the pilgrim is described as “doing the rounds”.  The rounds consist of  Seven Our Fathers and Seven Hail Mary’s and Seven Gloria said while kneeling in front of the well. Then one decade of the rosary is said three times as the pilgrim circles the well. The prayers conclude with the Rosary being said in front of the well.  I noticed two flat portable stones with crosses incised by pilgrims on the step in front of the grotto. The incising of the crosses appear to be part of the modern pilgrim traditions here.

Stone incised with crosses made by pilgrims

This well is one of   three holy wells located on Mushera mountain. All three  are called St Johns’s Well and all dedicated to the same saint. One is in the adjoining  parish of  Aghina  on top of the mountain and the   second is located on the old Butter road   in Banteer parish.  The well discussed here is  found is  in the parish of Millstreet.  Devotion to the other wells has waned over the years and now  the well in the parish of Millstreet is the main focus for devotion in the area. Time didn’t allow for me to visit the other wells but I do plan to head back before the end of the summer.

Like many other Irish wells the waters here are believed to have a cure . The wells waters are reputed to cure warts and one lady I spoke with at the pilgrimage mass told me her son had been cured of warts after coming to the well.

Folklore of the Saint

Tradition holds that  the saint came to the  Muskerry hills with  his three sisters.   His  three sisters  were saint’s  Lasair,  Ingean Bhuide and Latiaran who I discussed  earlier in the year on Facebook page. The feast days of the sisters   were honoured at quarterly periods and may be associated with pre Christian religion. The connection with the well here with mid summer may also suggest that St John like his sisters evolved from pre Christian deity at the well when an earlier cult at the well was Christianised.

Past Pilgrimage & the Pattern Day Tradition

The Millstreet.ie blog  gives the following  discussion of the pattern day

June 24th is the feast day of St John and down through the ages it has been a big occasion on the mountainside.  Up to about 1940, St John’s Day had a pattern as will.  The pattern consisted of tents set up abut a mile and a half from the well on the Macroom side, in the townland of Moulnahourna.  There were sweet and cake stalls, lemonade, cigarettes and porter tents, and of course the indefatigable three-card-trick men.  Occasions for celebration at that time were few and far between, Christmas, St John’s Day and March fair which lasted three days in Millstreet.  Due to this and the presence of the porter, these occasions rarely ended without a fight, these may have been faction fights.Two sisters from Millstreet, Han and Judy Murphy sat on either side of the Well “selling the water”.  One of them would fill a saucepan with water from the Well and received payment for it.  Pilgrims wisited the Well in the morning.  It was normal practice from Ballinagree and Rylane areas to visit the Well on top of the mountain in their own parish.  Most other pilgrims visited the Well  on the Millstreet side as is the case today.  After doing the “round” they continued on to the pattern to enjoy the remainder of the day.  An old character from Ballinagree, Bill O’Dea always turned up to entertain the crowd with his songs.  Another man from Bawnmore, nicknamed   St Joseph because of his long white beard also sang to the crowds.  His real name was Lucey.  Over the years the crowds got smaller at the pattern until eventually it was no longer held.  The dancehalls took over at that time, but local people still come to pay their “rounds” as usual.

This years  pilgrimage consist of mass which began at 8pm at the well on the 24th of June.  Many people visited the well before and after mass and took water home in bottles.  Despite it being June it was really cold probably due to the altitude of the site.

Many of the older people parked in the area in front of the well and some stayed in their cars throughout. The rest of the people gathered around the edge of the  circular carpark.

This is a real community  event and people from all the surrounding areas assemble here each year. I look forward to returning to find the other Holy Wells and seeing what I can find out about the history of the site.