Today is the feast of St Kevin of Glendalough. In recent months I have been doing some work on the 18th and 19th century Patron ( pronounced Pattern) Day celebration at Glendalough. Given the day that is in it, I will briefly talk about one of the post medieval stations visited by pilgrims to Glendalough called the ‘Deer Stone’. 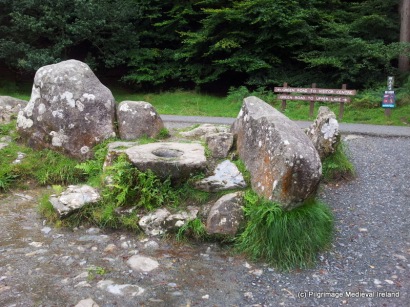 The Deer Stone at Glendalough

Location
The ‘Deer Stone’ is located beside the main ecclesiastical settlement at Glendalough. It sits on the south side of the Glenealo River, directly opposite ruins of St Ciarán’s church,
beside the green road leading to the upper lake. 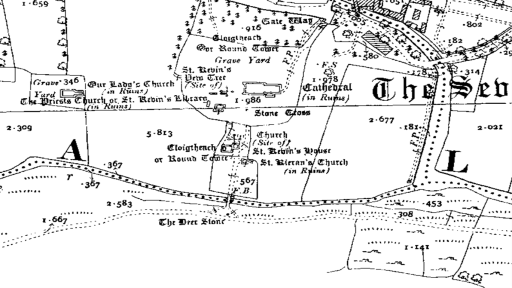 What is the The Deer Stone ?
The Deer stone is a bullaun stone. It is one of a large cluster found around the main monastic settlement and the lower reaches of St Kevin’s road. I have explained what bullaun stones are in earlier post but just to recap. Bullaun stones are artificial basins or hollow/depressions in rocks, boulders and stones. They are thought to date to the early medieval period. The majority are found at early medieval ecclesiastical sites but some are found in isolation.

There is a lot of debate as to their original use and function. Some argue that they are medieval pilgrimage stations/monument pestles of ritual or devotional use for  turning stones within the hollows. Others think they has a more practical use such as for grinding metal ores or herbs.It is interesting that an archaeological excavation carried out in 1979 prior to the construction of a car park for the visitor centre revealed large amounts of slag. Slag is a waste product of metal processing and its presence implies an iron working industry at Glendalough.

Whatever their original use many of these stones over time developed associations with the saints and were part of the post medieval pilgrim rituals. 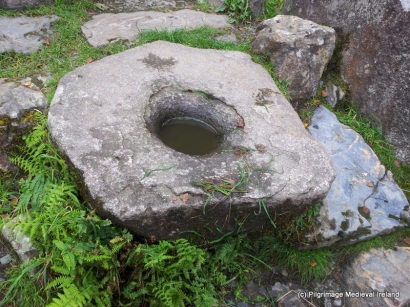 The basin of the Deer Stone at Glendalough

The Deer Stone is a large granite boulder ( .77m by .86m by .30m) with a single conical depression or basin. It is not mentioned in medieval sources but it was a point of devotional object for post medieval pilgrims.

Where did the stone get its name?

The stone derives its name from a legend associated with St Kevin. The legend hold that the wife of one of the saint’s workmen died giving birth to twins. The workman came to the saint to ask for help. St Kevin  set about solving the problem and having prayed to God for help  a doe came to a certain spot and everyday shed milk into a hollow in a stone while the workman sat on a nearby boulder. Legend has it that the man’s finger prints caused the hollow in the boulder  which was hence forth known as the ‘Deer Stone’.

The origin legend of the stone appears to be an adaptation of a story mentioned in the Saint’s Life. St Kevin fostered  a  boy child called Foelán. Fostering began when the boy was still a baby. To feed the baby a  doe came down from the mountain each day and waited until she had been milked by one of the monks. The child thrived  and ultimately inherited his father’s estate.

The patron day celebration  was suppressed by Cardinal Cullen in 1862 as part of a movement by high-ranking Catholic clergy to wipe out the celebration. They believed that the secular elements brought the religion into disrepute and that the religious devotions  rounding, walking in bare feet or crawling in bare knees were backward and superstitious.

I am still in the process of researching  this landscape  and the Deer Stone but here are some comments on the stone.

The Deer Stone was visited by strangers and pilgrims, and always found to contain water.

There is  said to be a cure obtained from the water lodged in the hollow in “Deer Stone”; but to be effective, it should be visited fasting before sunrise on a Sunday, Tuesday and Thursday in the same week and on each occasion a part of the ceremony is to crawl round it seven times  on the bare knees with the necessary prayers. 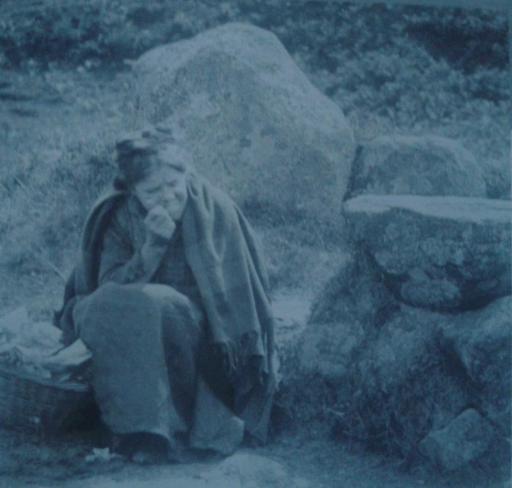