View from the Mass Rock facing towards Newcastle

In between the rain showers  I visited  a mass rock  in the Knockmealdown mountains with my uncle Eddie Prendergast. This rock was used by priests to say mass in the “penal times” and is located 2-3 miles outside of Newcastle village in Co. Tipperary. In the late 17th and early 18th centuries a series of laws known as  ‘Penal Laws’ were passed by the Irish parliament to force Catholics to conform to the established Anglican Church. These laws prevented Catholics from holding elected office, purchasing land, or owning property worth more than 5 pounds. Catholics were also barred from legal worship and the laws forced the practice of the Catholic religion underground. 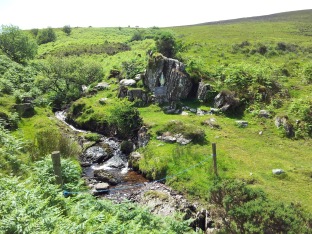 Mass was often celebrated in open air places in the countryside in isolated places with good views of the surround landscape. Large rocks were often used as alters. The Newcastle mass rock is a large rock outcrop of sandstone, located within a valley beside a fast flowing stream.  A rope has been placed across the stream to helps people cross safely.

The rock is known locally as cnoicín aifrin/little hill of the mass rock. According to Tales of the Deise it is associated with Knockanaffrin a mass rock in the Nier Valley. Priests on the run supposedly came from Knockanaffrin in the Commeragh Mountains here to Newcastle before heading on to Cork and Kerry. The site was rediscovered in the 1970’s by a local man called William Morrisey and shortly afterwards the present tradition of annual mass began (pers. comm. Eddie Prendergast). Mass is  held here annually by local people in the summer months.

I first visited the  rock in 1999.  At the time the site consisted of a large rock outcrop with a memorial plaque  dedicated to Mr Morrisey and a modern granite block with a cross, inserted into the outcrop used as an alter. A number of jam jars were scattered around the rock (possibly to collect water from the stream). Rosary beads and ribbons were tied to the surrounding heather.

This visit  I noticed a few changes, such as the addition of a large statue of the Blessed Virgin and a new memorial plaque dedicated to the memory of late Father Hallinan who often said mass here.

Statue of the Blessed Virgin at Mass Rock

Another unusual new feature was a small statue of a pigeon or dove is found on top of the rock. 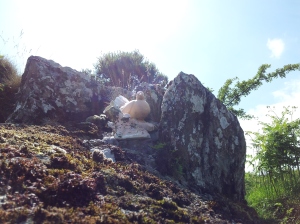 Statue of a dove

I am hoping to return for the annual mass in August and take  some more photos.

3 comments on “Mass Rock in the Knockmealdown Mountains”