Last Thursday the relics of St Anthony of Padua arrived in Ireland. The relics and their caretakers are on a whirlwind  tour of Ireland that takes in Dublin, Wexford, Cork, Limerick, Galway and Belfast, from the 17th  to the 24th of October. Each of these locations  will become centres of pilgrimage for the duration of the relics visit.

Who was Saint Anthony?

St Anthony  was born in Lisbon in 1195.  At the age of 15 he joined the Augustinians but later  became a  Franciscan Friar. Anthony was a favourite disciple of St Francis of Assisi, the founder of the Franciscans. He was also a great orator and  teacher. He died in 1232 and was buried at Sancta Maria Mater Domini Church outside the walls of the town of Padua. Many miracles occurred at his funeral and continued to occur at his tomb in the months that followed. Due to the great devotion to the saint he was canonized  just a year after his death.  Like many other medieval saints Anthony’s body was exhumed  and in 1263  it was moved to an elaborate tomb in the Basilica in Padua. 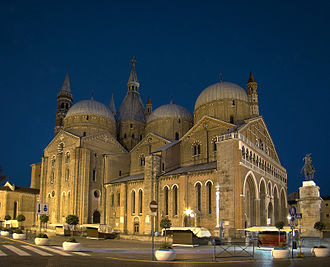 St Anthony’s relics have come to Ireland  to mark the 750th anniversary of the translation of his relics (the moving of the saints body  from the original grave to a new tomb/shrine)  and the discovery of his incorrupt tongue. St Bonaventure who  presided over the  opening of Anthony’s coffin, discovered that the saint’s vocal organs and tongue were intact. “Oh blessed tongue, that ever praised the Lord and led others to praise Him!” St Bonaventure exclaimed. The saint had been known as a wonderful preacher of the Gospel and it was thought this was why the tongue was still preserved. The relics are said to have worked many miracles and are still venerated to this day.

St Anthony is  the patron saint of lost things .  I remember as a child when I  or any of my family lost something   my mother would say “pray to St Anthony and he will  find it for you” .  The prayer was ” St Anthony seeks St Anthony finds”.

Today for one day only,  the relics of the saint were on display at St  John’s Cathedral in Limerick city.  I headed  along  to see the pageant.  The two relics – a small piece of bone from the Saint’s rib and a layer of St Anthony’s cheek were accompanied by  two  Franciscan Friars also from Padua. Both relics were housed inside two elaborate reliquaries and were displayed in front of the altar of the church.

Today’s pilgrimage began with mass at 10am. Fr Mario Conte, the international editor of the Messenger of St Anthony magazine , gave a sermon on the relevance of relics in today’s church and he also discussed the importance of St Anthony. The relics remained on display for the rest of the day, and following the mass, hundreds of devotees, lined up throughout the day  to  venerated the relics.

Pilgrims waiting to see the relic’s of St Anthony.

As I watched the pilgrims approach the relics I was struck by the similarities between these modern pilgrims and  the descriptions I had read  of medieval pilgrims at  European shrines.  Medieval pilgrims did their best to get as close to the saints’ relics as possible and if permitted  they would touch and kiss the relics of the saint. Pilgrims also liked to take away secondary relics known as  Brandea,  pieces of cloth, usually linen, that had touched  the saints relics. 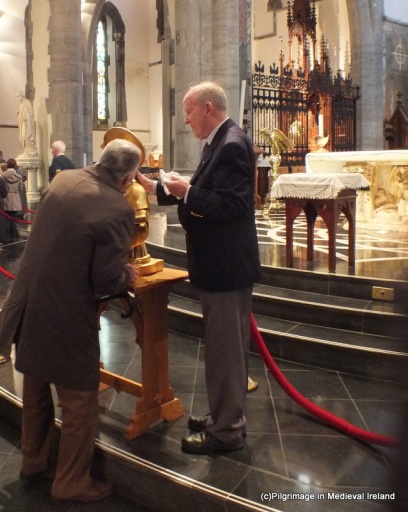 The  Limerick faithful formed an orderly queue up the central aisle of the church. When the pilgrims reached the relics they touched or  kissed the reliquary.  Some pilgrims  brought pieces of cloth or rosary beads  with them and pressed them against the relics, creating secondary relics, that they then took away with them as mementoes of their pilgrimage. A modern twist on this pilgrimage was the use of mobile phone to take photos of the relics as a memento.

The relics will now travel to Galway city where they will be on display  tomorrow. From Galway they will travel to Dublin and then on to Belfast before heading back to Italy via Britain.