Today is the 15th of August, the Feast of the Assumption. It is one of the busiest days in the Irish pilgrim calendar. One of the most spectacular pilgrimages to take place on this day occurs on Caher Island/Oileán na Cathrach off the coast of Mayo.

In 2014 I joined  with pilgrims in the annual pilgrimage to the island. This pilgrimage is a bit of a  journey if you don’t live in Mayo but worth any effort. Access to the island is also very much dependant on weather conditions so there is a risk of arriving and finding the boats are not going. I travelled from Cork to the town of  Louisburg in Co Mayo before continuing onto Ronnagh Pier. I then got on a boat organised by O’Malley Ferries  and  with other pilgrims sailed out to Caher Island. Boats also go from Inishturk island. 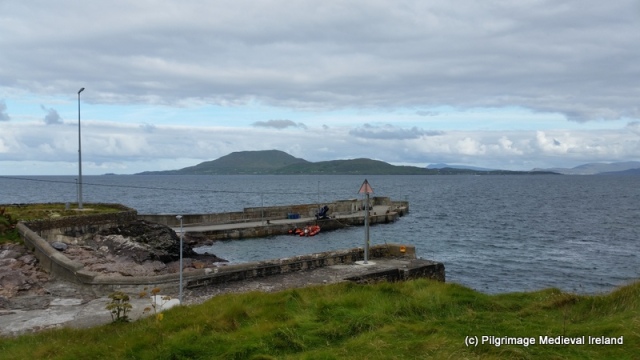 Caher Island a small uninhabited Island around 128 acres in size. It lies halfway between Inishturk Island and Ronnagh Pier off the coast of Mayo. The island contains the ruins of a small early monastic site and has a very fine collected of early medieval cross slabs. I plan to write a more detailed post about the archaeology and history of pilgrimage on the island in the coming months. 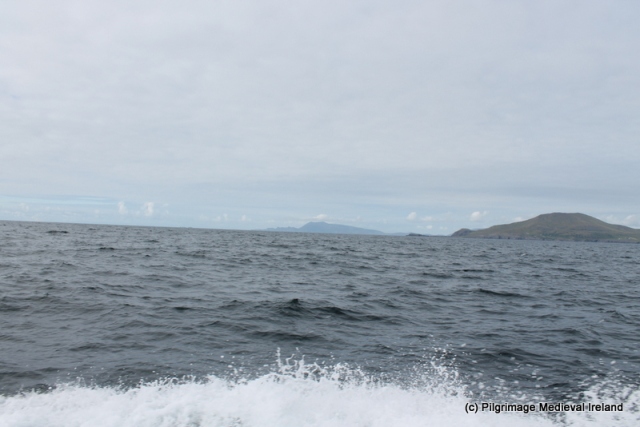 The waters around the island are treacherous so only an experienced boatmen familiar with the area can land safely.  The island has no pier so you have to climb up the rocks along the shore to get  to land. 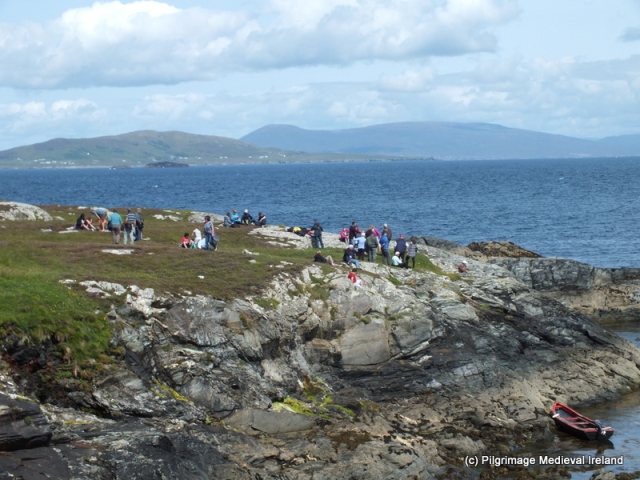 The island was also known as Oileáin na Cathrach, Cathair na Naomh and Cathair Pádraig.  St Patrick is said to have spent time here following his 40 day and nights on Croagh Patrick.  Folklore also  says the island is the  end of a mythical road called the  Bóthair na Naomh/Saint’s Road, that ran across the sea  up to the summit of Croagh Patrick. 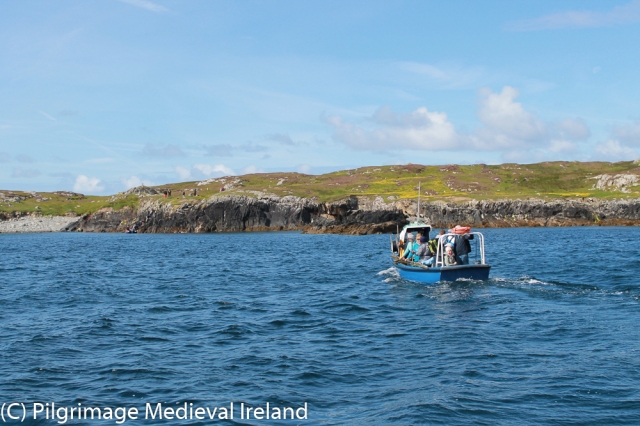 Arriving by boat at Caher Island

Today devotions on the island are focused around the small rectangular stone church. 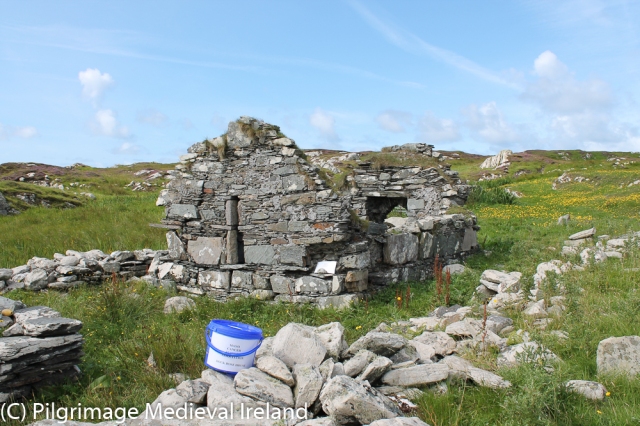 Within the church is a small altar with  a cursing stone known as the Leac na Naomh. The stone is a large conglomerate stone.  In times past people would swear on the stone to prove they had told the truth or in more sinister cases to make curses or cause storms. 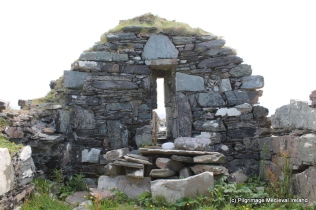 Alter inside the ruined church at Caher Island 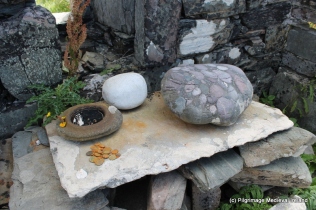 Conglomerate stone known as Leac na Naomh, used for rituals in times past

In times past a complex series of pilgrim stations existed on the island . The pilgrim landscape  incorporated the church a large number   leactha  in the surrounding  landscape and a holy well on the north side of the island. Leachta  the plural for leacht  is a type of dry-stone altar that predominantly dates to the early medieval period.  The majority of the leachta at Caher Island are surmounted by decorated early medieval cross slabs. 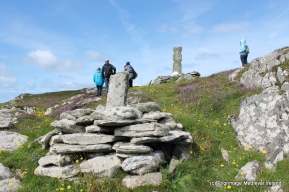 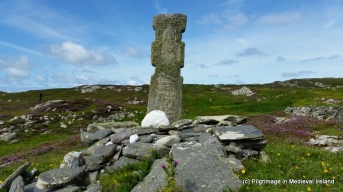 Today pilgrimage rituals are focused around a mass held outside the church. A large leacht in front of the east gable is used as an altar. 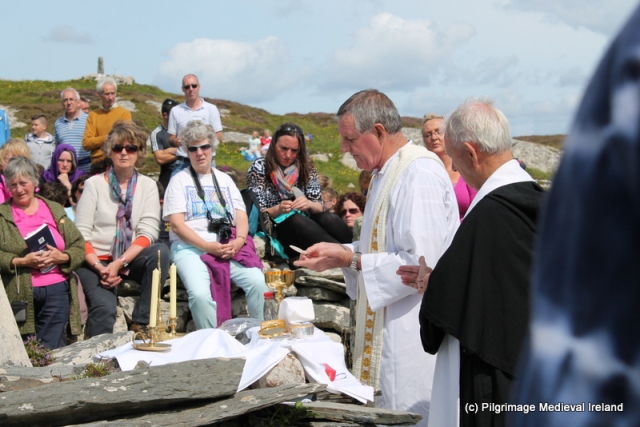 Some pilgrims will also include a visit to Tobar Mhuire/ Mary’s well, a holy well  located on the north side of the island. They will normally visit the well before the mass takes place. 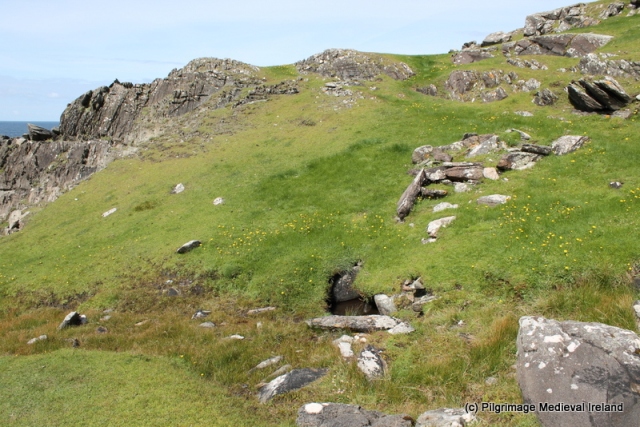 For many people  this pattern day or pilgrimage is an integral part of the annual pilgrimage to climb Croagh Patrick on the last Sunday in July with some feeling their pilgrimage is only complete once they have climbed the mountain and visited  Caher Island some weeks later. 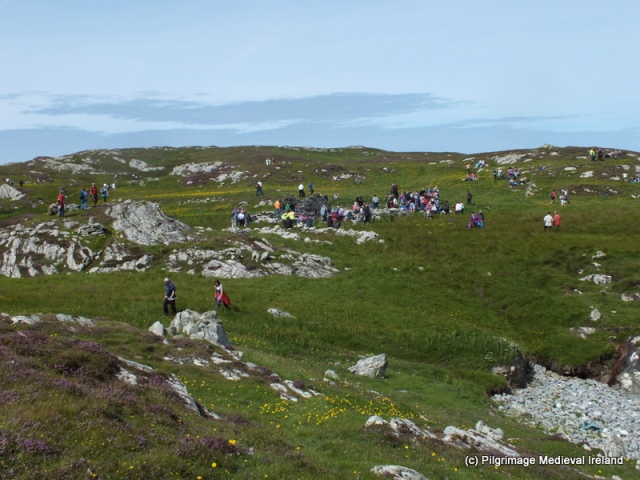 Following devotion pilgrims leave the island and travelled by boat to the nearby island of Inishturk for food and refreshments  at the community centre before heading back to the mainland. There is a great atmosphere on Inishturk with plenty of good food  and music and a visit here was a fantastic way to end such a great day.

Pilgrimage to Caher Island is one of the best pilgrimage experiences  I have had. The island is a fascinating place and I cant wait to get back there again  for a visit and to write more about the islands rich pilgrimage history.