Some thoughts on the Hollywood or  Labyrinth stone

The Hollywood or Labyrinth stone is one of the most interesting relics of medieval pilgrimage that survives today  in  Ireland. The stone as it name suggest is a large boulder  with an incised labyrinth motif on its face. 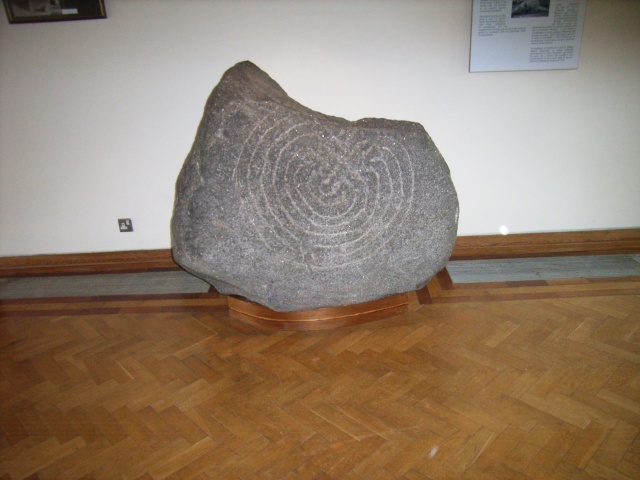 The stone was  originally located in the townland of Lockstown in the west Wicklow mountains some 4.8 Km from the ecclesiastical site of Templeteenaun and 3.2km from the village of Hollywood.  Shortly after 1908   the stone  was moved to the National museum. The stone is on display at the Glendalough visitor centre and is well worth a visit.

Another boulder with a small incised latin cross was found close by but this stone has since disappear.

Labyrinth motifs can be traced back to prehistoric times in ancient Egypt and Greece (Harbison 1998, 107). Prehistoric labyrinths are generally composed of seven outer circuits and the highest density of stones incised with this motif are found in northern Europe, in Denmark, Norway, Sweden and Finland.

In  medieval times  the labyrinth  underwent a revival and became primarily a symbol of pilgrimage, and in particular pilgrimage to the holy shrine of Jerusalem ( Coleman & Elsner 1995, 112). Shortly after the loss of Jerusalem to the Muslims in the twelfth century, large labyrinths of mosaic or paving stones were incorporated into the western nave bays of a number of European cathedrals in the twelfth and thirteenth centuries (Connolly 2005, 286). Examples include Chartres near Paris, St Quentins, Amiens, St Omer and Rheims in France, San Vitale in Ravenna, San Savino Piacenza in Turin and Lucca Cathedral in Italy (Westbury 2001, 47-49, 104-105). Lucca was an important pilgrimage shrine as well as a stopping point for pilgrims travelling along the pilgrim route Via Francigena to Rome. One of the best preserved, largest and most famous and largest of medieval labyrinths (c.13m in diameter) is found at the cathedral of Chartres, France. It is believed that the Chartres labyrinth, like many others, was designed in response to the loss of Jerusalem and presented the medieval audience (Connolly 2005, 287).

By walking, or in some cases crawling on their knees, along the labyrinth, pilgrims could perform an imagined pilgrimage to Jerusalem (Westbury 2001, 51-52). Apart from its associations with Jerusalem, the motif also became symbolic of the individual’s journey through life and salvation in the next (Coleman & Elsner 1995, 112).

How old is the  Hollywood Stone?

At present it is not possible to definitively date the Hollywood stone. Price (1940, 260-261), and Harbison (1991, 142) all favour an early medieval date but given that the majority of medieval labyrinths date to the twelfth-thirteenth century or later, it may be worth considering a high medieval date for the stone. It was also during this period that the pilgrim movement across Europe reached a peak and the labyrinth as a symbol of pilgrimage came to be in vogue.

Function and Meaning of the Hollywood/Labyrinth stone
The  proximity of the Labyrinth stone to St. Kevin’s road and the ecclesiastical sites of Hollywood and Templeteenaun, along with the symbolism of the labyrinth motif, suggests that this stone was, connected to pilgrimage in the Kings River valley (Harbison 1991, 122, 142; Orpen 1923 Nugent 2009 Vol. I, 223-225 ).  It is possible that the stone functioned as a wayside station for pilgrims entering the western end of the Kings River valley en-route to Glendalough, and provided a place to pray and reflect before continuing onwards. 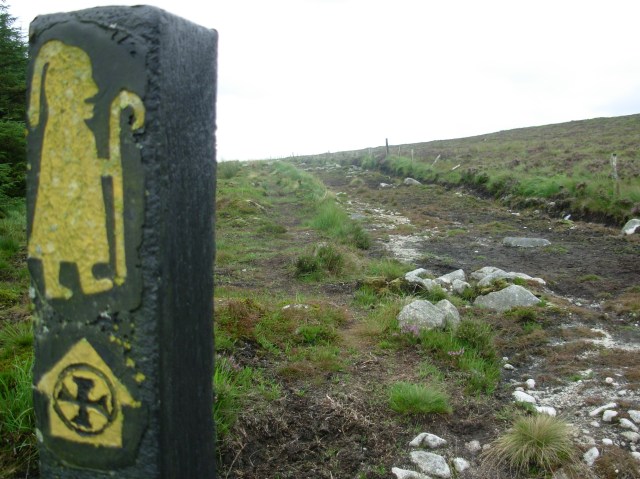 Only two other medieval labyrinths, incised stones are known in Ireland one located at the late medieval parish church of Rathmore, Co. Meath the other a carving found on the base of the twelfth century high cross at Cashel but neither appear to be associated with pilgrimage (Harbison 1998; Leask 1933).