Throughout the medieval period many people made pilgrimage in times of crisis such as personal illness, outbreaks of disease and natural disasters like drought. The Black Death was one of the biggest crisis to be faced by people during the fourteenth century in  Ireland.

The Annals of Ireland written between 1333-1349 by John Clyn, a Franciscan friar of Kilkenny, contains a chilling first hand account of the Black Death as it raged through Ireland.

The text also records a very rare account of pilgrimage to the ecclesiastical site of St Mullins whose ruins are now at the centre of a picturesque village of the same name in Co. Carlow.

The ecclesiastical site of St Mullins traces its history back to the seventh century, when St Moling founded a monastery on the banks of the river Barrow.  Following the saints death his monastery went on to become one of the most importance pilgrim sites in Leinster.

In the year in 1348  John Clyn recorded great numbers of pilgrims arriving at St Mullins. The pilgrims were drawn here because of St Moling reputation for healing and miracles. They hoped that by praying to the saint in the presence of his relics they might be protected from the plague.

This year, and chiefly in the months of September and October, great numbers of bishops and prelates, ecclesiastical and religious, peers and others, and in general people of both sexes, flocked together by troops to the pilgrimage and wading of the water at Tigh Moling [St Mullins] so that many thousands might be seen there together for many days; some came out of devotion, but the greater part for fear of the pestilence which raged at that time with great violence….” ( Williams 2007, 246).

The pilgrims made their prayers at St Moling’s holy well  and millrace located just outside the main monastic enclosure.  The twelfth Latin Life of  St Moling, recalls how the saint single handed dug the mill race over seven years and then consecrated ‘…by walking through it against the flood…’. The pilgrims hoped that by washing or ‘wading’ in the of the waters of the millrace and the holy well they would be protected from the plague. We do not know how the pilgrims fared in the coming months how many died or survived. 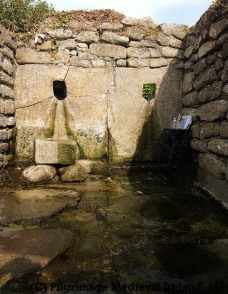 Remains of the medieval millrace at St Mullen’s Co Carlow

The plague spread rapidly after its arrival to Ireland.  In June of 1349 Clyn wrote that the pestilence was so contagious that those who ‘touched the dead or the sick were immediately affected themselves and died’.   Shortly after writing the description below Clyn contracted the disease and died.

Many died of boils, abscesses and pustules which erupted on the legs and in the armpits. Others died in frenzy, brought on by an affliction of the head, or vomiting blood. This amazing year was outside the usual order of things, exceptional in quite contradictory ways – abundantly fertile and yet at the same time sickly and deadly… It was very rare for just one person to die in a house, usually, husband, wife, children and servants all went the same way, the way of death… (Williams 2007, 250).

One comment on “Pilgrimage to St Mullins Co. Carlow during the Black Death”