I so delighted that Amanda Clarke of  Holy Wells of Cork, has agreed to write a guest post. Amanda has been doing wonderful work recording the holy wells of Cork.  I will let Amanda tell you about her project and all about the wonderful Tobar Mhuire in Titeskin.

Background to Holy Wells of Cork

A year and a half ago, on St Bridget’s Day, I started a new project with an intention to visit and record all the holy wells in County Cork. Alarmed by how many wells seemed to be disappearing, both physically and from folk memory, this seemed to be a necessary and interesting, if possibly foolhardy, venture! So far I have visited just over 200 wells (there are 356 recorded in the National Monuments’ Archaeological Inventory) and have discovered an astonishing variety. Some have vanished, some are flourishing and most are somewhere in between. Sometimes, though, you find a holy well that remains with you, one that seems to have just about everything: a long history, is fairly well documented, still contains all its sacred signifiers, has cures and miracles associated with it and is still thriving and revered in the 21st century.

Tobar Mhuire, or Lady’s Well, is to be found in the townland of Titeskin in East Cork, not far from Cloyne. The well is approached down a trackway and stands alone in a green field, instantly evocative and attractive. The first thing you notice (after the huge and insensitively placed pylon) is the tall and impressive ash tree and the little whitewashed wall curling around it – the well was once known as Whitewell.

Tobar Mhuire, or Lady’s Well, is to be found in the townland of Titeskin in East Cork, not far from Cloyne.

Coming closer you can see that see that the wall is literally embraced by the tree, its roots sweeping out like tentacles over the masonry. The tree is considered to be several hundred years old but the wall must be even older, standing when the tree was but a sapling.

The wall is stone built and gleamingly whitewashed, neatly circular and undulating, a small opening with rough steps leading down into its centre. Overlooking the whole thing is a whitewashed niche containing a statue of the Blessed Virgin Mary (BVM), a cross on the top. 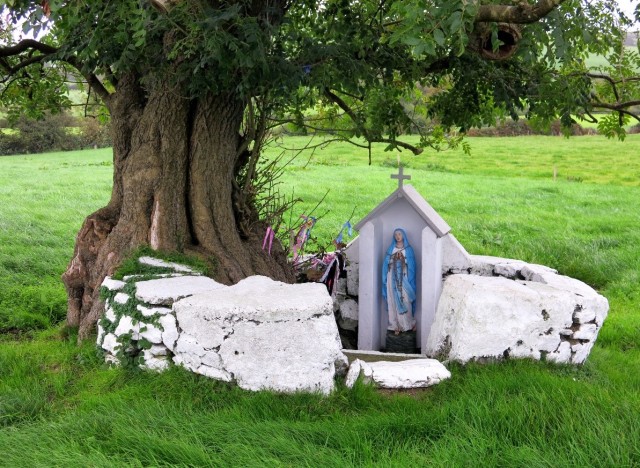 Steps lead down to the well  at Tobar Mhuire

Inside a rather unsympathetic metal lid protects the well, but lift it up and the water is abundant and cold, a bit plant-strewn but still clear. Like other holy wells, the water is considered special: it is said to remain warm in winter and cold in summer and to never run dry. Cups are available should you wish to sample the water.

A wonderful source for investigating holy wells is the Schools’ Folklore Collection. In 1937 all National Schools in the country were asked to take part in a folklore survey. 5,000 schools took part and 50,000 children were asked to interview older members of the community for their memories and to record their answers. One of the questions specifically referred to holy wells. The whole thing is now online and can be found at: http://www.duchas.ie . There are several entries referring to Lady’s Well and this one shows how little the physical features of the well have changed over the years and gives some information about the special properties of the water:

There is a holy well situated on our lands at Kilteskan in the parish. It is enclosed by a circular wall in fairly good repair. A very large ash tree is growing on the western side. The tree appears to be very old. There is an outlet from the well on the northern side to carry away the surplus or overflow of water which is fairly large and which never seems to vary in quantity in any weather. Even in the very driest of weather the quantity from the well seems the same as in the wettest winter. A curious fact about the water is that it seems warm in winter and very cold in summer (School’s Folklore Collection 223-227:0395).

Water from a holy well should only be used for healing purpose and not for domestic usage. One woman took some water home for her kettle and was astounded to find a trout in it and the water resolutely refusing to boil:

… There is a trout in the well and I was told my grandmother brought a jug of water from the well to make tea. But though she did her utmost to boil the water she could not do so. She then took the water back to the well, and in pouring out the water she saw the trout coming out of the kettle. She again filled the kettle and had no trouble boiling it. It is said that anyone who sees this trout is instantly cured of any disease.

The trout is an interesting reference. Many holy wells are said to contain blessed fish, usually eels, trout or salmon. Seeing one was considered extremely fortunate and a sign that your prayers would be answered.

Like many other wells, the water at this Lady’s Well contained a cure, particularly effective it seems for blindness and lameness. The same young writer from the 1930s describes some of the cures attributed to this well:

A man came to visit the well. He was crippled and had two crutches. When he had the rounds finished he went to a pool formed by the overflow of the well. and washed his legs in it. He was instantly cured. It is said he left his crutches under the tree. Another cure is that of a little boy of seven years old who was unable to walk. He was brought in a perambulator to the well by his parent who washed him in the water outside the well. He was instantly cured, His father in thanksgiving put a statue of the blessed Virgin in the tree over the well. This boy’s father also in thanksgiving promised to visit the well every pattern day for as long as he lived. He has not come now for three years. Another lady was cured of deafness. She also in thanksgiving had erected a beautiful statue of Our Lady. This statue is about three feet high and last year was covered with a concrete shelter at the order of the cured lady.

The overflow pool is still there and this is where limbs and other afflicted parts would have been washed, the water from the holy well itself being used for drinking.

The statue and concrete shelter once given in thanks, remain too, now dateable to the early 1930s thanks to the entry in the Folklore Collection. The statue is rather beautiful;  Our Lady has a wistful expression, her hands in prayer, now adorned with rosaries. 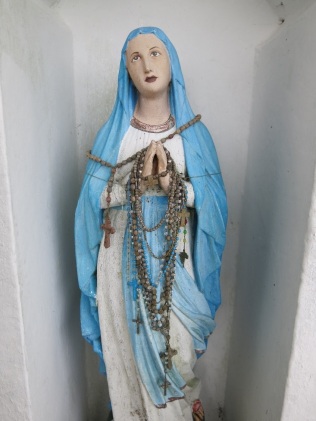 Statue of BVM given in thanks

Another statue, also enclosed in a niche, hangs in the tree; could this be the one given by the grateful father? Other offerings of rosaries and cards are still evident and it is clear that the well is active and much revered.

The well, like many others is dedicated to Our Lady or the Blessed Virgin Mary (so far 31 out of 200 wells I have visited have been dedicated to the BVM). It is even said that she appeared here. The annual pattern day or pilgrimage to this well is the 15th August, the Assumption of the Blessed Virgin, and a Mass is still conducted here on that date. Traditionally devout pilgrims were expected to visit eight days before and eight days after this date. Rounds were paid whereby a prescribed route was followed going clockwise around the well, prayers being said at certain stations or stopping points. 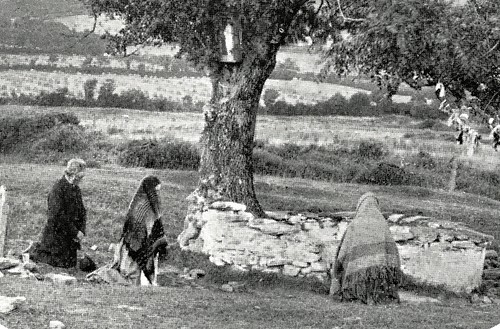 This photograph shows pilgrims paying the rounds sometime in the early twentieth century. The statue in the tree is there but the larger statue and its niche built into the wall have yet to arrive. The tree is still just outside the wall but getting closer. 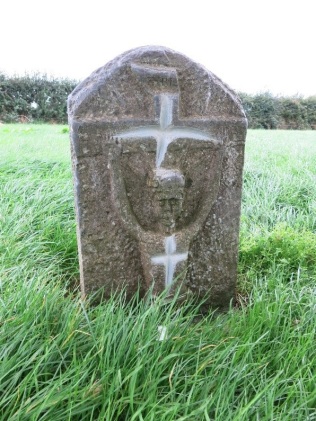 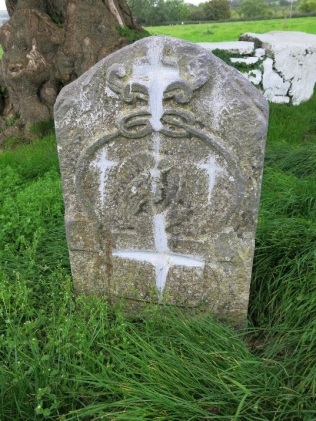 On one side there is a depiction of Christ crucified, arms aloft and the letters INRI still discernible above his head. On the other side is a head in profile, usually interpreted as the BVM with a halo. Look carefully and you can still see a faint inscription which reads: Seven Pater Nosters and Seven Ave Marias. The Honour 1731. Both sides of the stone bear inscribed crosses, marked by hundreds of pilgrims over the years – another feature of paying the rounds.

After the rounds were completed it was common to leave offerings, followed by drinking water from the well. For those people too sick to travel to the well, a bottle could be taken home. Sometimes rags were also left in trees. These are usually known as known as rag trees. In Scotland rag tress are known as clootie trees. They could either be left as an offering or the rag could be applied to a diseased area, then hung on the tree – as the rag deteriorated so did the disease of the sufferer. The rag tree is still flourishing today.

Its seems it was once a well of importance and some controversy, judging by another entry in the Schools’ Collection:

As regards Tobair Muire, so famous was the Well even as recent as the seventies that a special Correspondent was sent by the “Irish Times” or “Cork Constitution” to investigate and report on the Pattern there. It need scarcely be said, have regard to the intensity bitter religious and political prejudices of the “Ascendancy Party” of those distant days that the writer was anything but sympathetic respectful or even truthful. He was replied to by the then Parish Priest Canon Smiddy the eminent Irish Scholar and Archaeologist. The reply was published in pamphlet form and had an immense sale. The Well had a great vogue up to about the middle of the last century; pilgrims coming not alone from remote parts of the County but from various part of the country at large … Many remarkable cures are said to have occurred in the last century, but the cult has fallen away and badly needs reviving. (0393:004/005)

I wish I could find a copy of the phamphlet but Canon Smiddy would be reassured to see that the well continues to assert a quiet presence and  relevance into the 21st century. A very special place.

Many thanks to Louise for inviting me to contribute a guest blog on her wonderful and informative site.

For more information about my project please visit: holywellsofcork.com

If anyone has any information about holy wells in Cork I would be delighted to hear from you.