Last week  I was lucky enough to go on a guided tour of the  St Mary’s Collegiate Church  in Youghal. The tour was led by archaeologist Dan Noonan. The church is an amazing building, filled with  many interesting features and I highly recommend  a visit.

The church is surrounded by a really interesting historic graveyard located in the north-western corner of the town walls. The graveyard has a very unusual  and interesting feature. This is a coffin-shaped recess built into the town walls.  Tradition has it the recess was used to hold a coffin for pauper burials.  Those who could not afford a coffin were place within this coffin temporarily during the burial process. 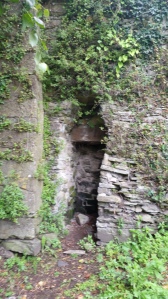 The deceased was carried to their  grave  in this coffin and then they were removed and placed in the grave. The coffin was then returned to the wall  to await the next burial.

Engraving of the coffin-shaped recess dating to the 19th century

Id be really interested to know if anyone has come across anything similar at  other graveyards.