Over the course of my career as an archaeologist the  most common artefact I have found on site is  the clay pipe.   I have a particular soft spot for  clay pipes  so on Thursday morning last, as I was driving through Co Roscommon, I had to detour to visit the  Claypipe Centre at Knockcroghery.

During the  18th and 19th century clay pipes or “Dúidíns” as they were known in Ireland  played an important role in Irish everyday life and custom, especially regarding wakes and funerals.

Their association with traditions, along with the pleasure of “taking a puff”, led to their growth in popularity throughout the country but most particularly in the rural communities of Ireland. They were often associated with storytellers who would keep an attentive crowd in suspense in the midst of a story while having a smoke from his dúidín.
Clay pipes were also particularly prominent at wakes, where trays of tobacco filled pipes, Guinness and whiskey would be provided for the mourners. As soon as a person died, relatives or friends would buy a number of items for the funeral ceremony and these typically included a half barrel of porter, a gallon of whiskey, snuff, tobacco, and of course clay pipes.
It may seem strange now, but the clay pipe was one of the most important parts of any wake and was considered improper to be without them. A gross or more was usually purchased and this would then be filled with a twist of cheap tobacco, and passed around to all the mourners in the room.
Traditionally, the shank of the clay pipe was dipped into some Guinness or whiskey, a process that scaled the mouthpiece and imparted a good flavour to the clay for the smoker. Upon receiving the pipe it was customary to say “Lord have mercy” and in time the pipe became known as a “Lord ha’ mercy”.

Pipes were  smoked by both men and women. As a general rule the small the pipe bowl the older the pipe.

Clay pipes were produced in vast amounts in Ireland  and  Knockcroghery was one of the main centres of production for the Irish clay pipe industry. Pipes were produced here for over 300 years and towards the end of the 19th century, seven   families were involved in the industry in the village each with their own kiln.  Production ceased when the village was burned by the Black & Tans in 1921. Turtle Bunbury has written an excellent article on this event.

Excavations at the Hamilton family clay factory at Winetavern Street in Belfast  produced numerous clay pipes. This excavation and others around the country have shown that pipes occurred in a variety of forms some were plain while others had elaborate decorations. Interestingly many  pipes were decorated with political slogans while others had symbols of societies such as the masons.  The Knockcroghery pipes were inscribed with the names of their producers – O’Brien, Curley, Cunnane and Murray  or  inscriptions such as “Home Rule”, “Who dares speak of ’98?”, “Support Irish industry”, “Repeal” and “Parnell” (Bunbury).  The Winetavern excavation uncovered

…twenty-seven types of late nineteenth-century pipes, ranging from the ‘cutty’ (a small, plain pipe), through those embellished with masonic symbols (compasses, plumb bobs, wheat sheaves, fruit) to pipes bearing more overtly political symbols and slogans (the Red Hand of Ulster, ‘Home Rule’ and ‘Gladstone’). Clearly, the Hamiltons tailored their production for a range of customers and markets (Donnelly & Brannon 1998).

Ethel Kelly has reviving the tradition  of Irish clay pipe making at the Claypipe Visitor Centre at Knockcroghery . 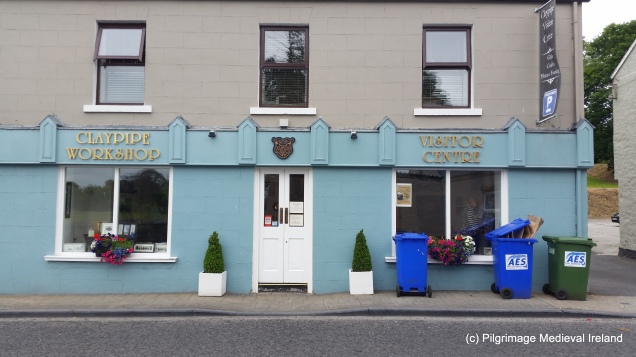 Ethel  produces  clay pipes in the traditional fashion.  A visit to the centre is a wonderful experience  as you can learn about the history of clay pipes, see and participate in demonstrations of  clay pipes being made.

If you are passing through Roscommon  do stop here for a visit.