Recently I was in Carrick-on-Shannon and stumbled across the most amazing little building. The building in question is a small memorial chapel located at the top of Bridge Street sandwiched between two shop fronts.

The chapel, a single room building is tiny, measuring circa 4.8m x 3.6m. The chapel, built on the site of a former Methodist chapel, was commissioned in 1877 by a Carrick-on Shannon merchant called Edward Costello  as a memorial to his wife Mary Josephine. The building was completed in 1879.

The chapel was built of cut limestone with a steep pitched stone roof with two Celtic cross finials at each gable.  On the left hand side of the door is a carved stone depicting the Costello coat of arms and  Latin motto  ‘Ne te quaesiveris extra‘  which  means ‘Seek not thyself outside thyself’.

The chapel is entered through two doors of simple design, made of wrought galvanised iron.

The chapel’s doors are made of wrought galvanised iron.

Within the church is a small marble altar  and tabernacle.  Mass was celebrated here from the time of Mary’s interment in 1879, on the first Friday of every month until Edwards death in 1891. 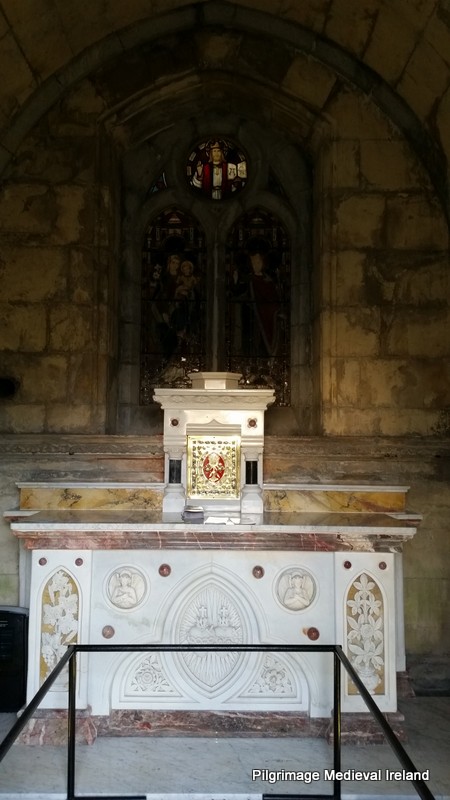 Mary Costello had died in 1877 and her remains were embalmed. When the chapel was  completed she was buried within the chapel on the right hand  side of the building in a rectangular sunken grave.   Following Edward’s death  he was also buried in the chapel and placed on the left hand side  of the chapel.  Both graves were sealed by a thick clear glass and when you enter the chapel today the coffins are visible.   The floor of the chapel was tiled with  tiles depicting symbols of the crucifixion.

Another lovely feature of the chapel is beautiful stain glass window  which the information plaque at the site  notes was designed by Mayer of Munich.

The chapel is a beautiful structure and testament to Edward’s  devotion to his wife.  If you are passing through Carrick-on-Shannon do seek it out and see for yourself.