Last Sunday I paid a flying visit to the medieval Cathedral at Clonfert Co Galway.

Clonfert Cathedral was built on the site of an early medieval monastery founded by St Brendan the Navigator circa 557 AD.   The history of Clonfert and its architecture is really interesting  and I will come back to it again but for this post I want to focus on a lesser known feature at the site known as St Brendan’s rag tree.

The tree,  a horse-chestnut,  is located in a grove of trees beside  the medieval church along the nuns walk. This is one of the most impressive rag trees that I have come across.  It is covered in votive offerings.

The following text was written  by  Christy Cunniffe  for the  South East Archaeological and Historical Society Newsletter for Spring 2012  and provides an excellent discussion of the tree and its history and folklore.

Devotion at holy wells and sacred trees is still quite common
throughout rural Ireland. This example in the woodland near the
cathedral at Clonfert consists of a holy well dedicated to St Brendan.
It manifests itself in the form of a horse chestnut tree with a small
opening in its northern side. In its original form St Brendan’s Well
consisted of an actual well in the ground located in the corner of a
field some three hundred metres south east of here. According to
tradition the well was desecrated when a dog drowned in it. It then
dried up as is usual for wells that are interfered with in some way .

It moved to a new location in the bough of a large ash tree growing on
the ‘hill of the abbey about a hundred metres away. The folklore
attached to this latter well relates that two young boys climbed the
tree and that one of them ‘peed’ into the waters of the well causing it
to fall in a subsequent storm . So once again because the well was
desecrated it went dry and was forced to move. The well that people
now recognise as St Brendan’s Well was only discovered in the
earlier part of the twentieth century and was recognised as such due
to it resembling the shape of the nearby Romanesque doorway of St
Brendan’s Cathedral. Pilgrims and people seeking cures for illness
visit here and leave votive offerings and requests for cures. In earlier
times it was used only for the cure of warts, but in more recent times
is used as a place to seek cures for sick children, thus explaining the
particular array of votive offerings left by believers. To effect a cure
it is commonly believed that one must make three visits and leave
something (Cunniffe 2012, 2). 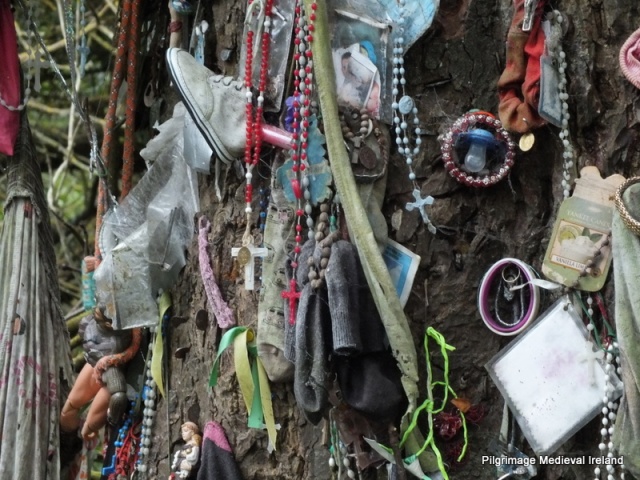 The offerings pinned to the tree are varied.  They range from rosary beads, hair bobbins, sockets, babies dummies,  religious statues and children’s toys and brown scapular.

The base of the  tree is surrounded with a circle of offering some may have fallen from the tree but others  are likely placed here on the ground.  These offering are similar to those pinned to the tree although I notices more items of clothing,  religious statues, inhalers, containers for tablets  and holy water bottles. The volume of objects is astonishing and shows that there is still a great devotion to the tree.