Last summer  while working on the  Spike Island Archaeological Project a colleague  told me about some old graffiti in the town of Cloyne, Co Cork.  I had visited Cloyne   a few weeks previous and had been singing its praises.  At the time  I was also undertaking a small social history project supervising  a group  students in the  recording and documenting of the prison graffiti left by the  modern inmates at the education block known as  Mitchell Hall on Spike Island.   I was immediately curious and took  another trip to Cloyne  later in the summer.

The Cloyne  graffiti looks like it  dates to the 19th century. It is  found on the exterior of the eastern graveyard wall. The wall defines the edge of a small little laneway that runs alongside the graveyard.  The graffiti is found on various stones from the top of the lane beside Church Street to where the lane starts to bends.  Many Irish medieval monuments  such as castles and churches  have graffiti left by people who lived in the 18th/19th century  such as  Trim Castle Co Meath.

Lane on the southern side of Cloyne Graveyard

My visit here was only a short one but  I noticed most graffiti consisted of people’s names.  I also noticed a possible maltese style cross design on one of the stones.

I could make out the initials J B; R B; W F on this stone

Below is a stone located towards the east of the lane, with the initials N R. 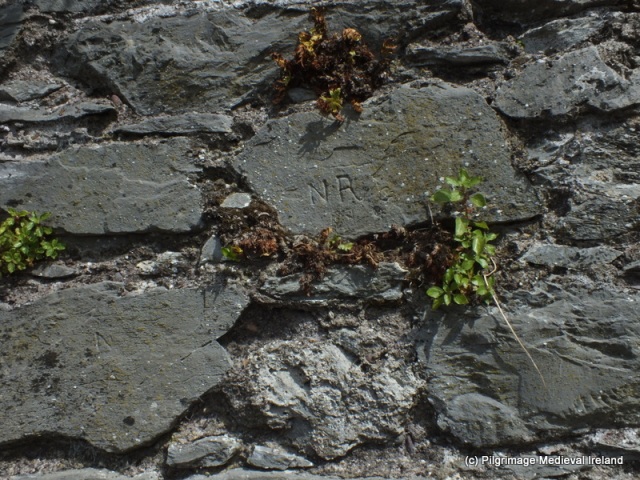 Stone towards the east of the lane with the initials N R.

Some of the stones have a surname followed by the placename Cloyne which suggest much of this was written by people native to the area.

Cloyne is written in the bottom right hand corner of the photo.

The stone below has the inscription J. Barry Cloyne

Some of the inscriptions are more difficult to read and will take some patient deciphering.

I hope to come back during this summer and do some more detailed photographing and recording. As I walk down the lane I couldn’t help wonder about the people who wrote on this wall. Why did they do it? Did they sneak out  at night?  Did anyone get caught while writing?  These carving which were  probably seen as vandalism at the time provide a lasting link to past and individuals who lived in the town such J Barry of Cloyne.

I will keep you posted on any further discoveries.  If you are interested in ancient graffiti  I have put some links to some really interesting project happening in Ireland  and Britain that are worth checking out.