This week  I called up to Ballylanders in Co Limerick, where my good friend archaeologist  Colum Hardy and a team  of local volunteers are recording the historic graveyard known as Ladywell. Colum is employed by the Ballyhoura Development company who are currently recording all of the historic graveyards in the Ballyhoura area. Like the graveyard recording in the Knockmealdown area (Newcastle, Shanrahan and Tubrid Co Tipperary)   which I have previously written about,  the Ballyhoura project began with community training by John Tierney and Historic Graves in March 2012.  A series of training programmes were put in place in a number of local communities.  According to Colum ‘ With the ongoing and increasing interest and support and dedication from an army of volunteers from the Ballyhoura Region the project has continued with well over 70+ historic graveyards now recorded.’  As the graveyards are recorded the results are placed on the Historic Graves website .  The work from the project has built up a huge genealogical repository of information for the region  and is being availed of by people all over the world who have traced their roots to the area.

The graveyard surrounds a late medieval church which is now covered in a dense covering of ivy which obscures a pointed cut stone door way and an ogee headed window.  According to the notice board the church is known as the spittle church. Interestingly ‘spittle’ as a placename element usually indicated the presence of a hospital. The townland to the east of the church is called Spittle. 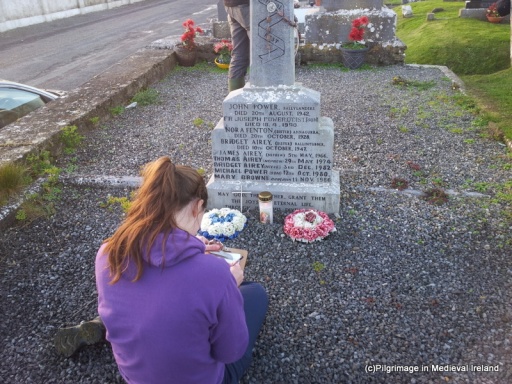 One of the volunteers recording the gravestones.

The graveyard  that surrounds the church has a number of fine examples of 18th and 19th  gravestones. A number of the stones have images of the passion on it.

One of the  oldest stones is found close to the east gable it is a simple slab with  IHS design with a cross extending from the H. The left side of the stone is damaged but it is still possible to read the inscription. 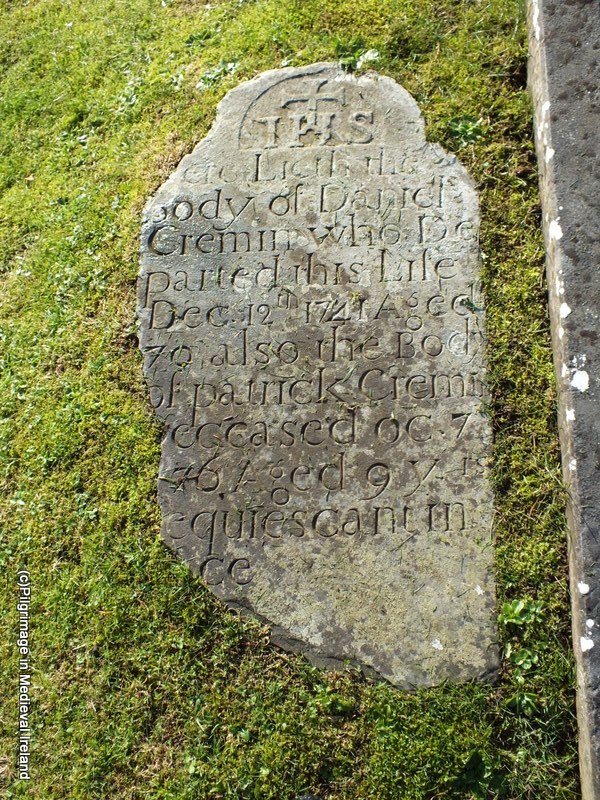 This stone record the death of Daniel Cremin who died the 12th of Dec 1741 aged 70 along with Patrick Cremin who  died Oct 7, 1776 aged 9 years.  On the north side of the graveyard is an elaborate grotto which incorporates a holy well.

Grotto and holy well at Ballylanders.

The well is known as  Lady well and is dedicated the Blessed Virgin.  The water from the well is traditionally held to cure sore eyes. According to the notice board at the site, in 1840 a rag tree once stood beside the well.  The well is still visited by local people and a pattern still takes place here on the 15th of August. 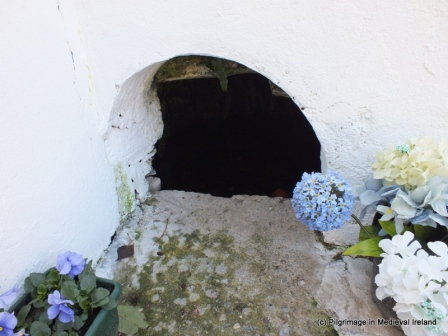 Holy well dedicated to the Blessed Virgin  at Ladywell, Ballylanders.

List of Genealogical Sources for the area at http://visitballyhoura.com/index.php/2012/06/12/genealogical-resources/