Molana abbey has been on my list  of  places to  visit for a such a long time and I finally got my chance this week and boy was it worth the wait!!

The abbey is  located  on an island in the Blackwater estuary on the  Ballynatray estate just outside of Youghal. On private property the site is open to the public during the summer months on  Tuesday, Wednesday and Thursdays. 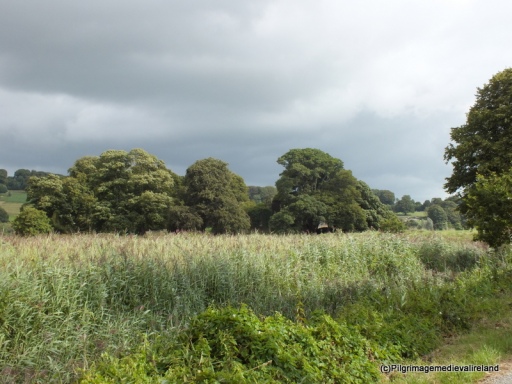 View of Molana Abbey, hidden among the trees

History of the Molana

Molana was  founded in the 6th century by a little known Irish saint  called  Maol Anfide, a contemporary of St Mochuada of Lismore. The saint  built a monastic settlement here on a small island  called Dairninis  or the ‘island of  the oak’ . No architectural evidence remains of this early settlement and today the ruins on the island date to the late 12th and  13th century.

In 1806 Dairninis  Island was joined to the mainland by a causeway and bridge  by Grice Smyth the then owner of the Ballynatray estate.  I was delighted to see oak trees still growing on  the island and along the causeway continuing the tradition of the place-name origins for the site.

By the early 8th century, Molana was a major stronghold of the Céili Dé (Servants of God), a monastic order determined to reform the church. Its abbots subsequently played a key role in the subsequent introduction of Continental ideas to Ireland. Indeed, as Dr Dagmar Ó Riain-Raedel noted in her thesis on the island, the Abbey’s greatest hour came in about AD 720 when its Abbot, Ruben Mac Connadh of Dairinis, working with Cu-Chuimne from the island monastery of Iona, produced the Collectio Canonum Hibernensis. This was a profoundly valuable and important book for the church, written in Latin, effectively dictating the first rules of Canon Law. Its very title reflects its origin as a compilation of over two hundred years worth of canon law and synodal decrees. The text itself drew heavily upon previous ecclesiastical regulations and histories, all dating from the centuries prior to 725. It also included papal epistles, acts of synods, eccleiastical histories, a definition by Virgilius Maro Grammaticus, a compusticial tract by Pseudo-Theophilus, spurious ‘Acts’ of the council of Caesarea, the so-called dicta of Saint Patrick and several quotes from all but one of the works of Isidore of Seville.

Indeed, there is reason to believe that Molana Abbey may have been home to the first library in the south of Ireland. Unfortunately, none of these original manuscripts have survived but copies can be found in archives all over the Continent. Collectio Canonum Hibernensis was circulated throughout Western Europe for the next four hundred years

Despite this fascinating early history no physical remains of what was once an important and influential monastery are to be found. 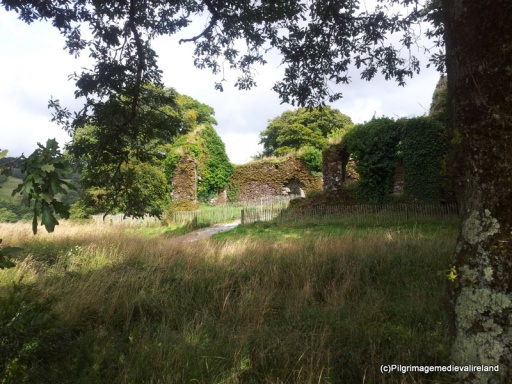 The ruins of Molana Abbey on Dairinis Island

By the 12th century Molana abbey was re-established as an Augustinian Priory  by Raymond le Gros FitzGerald, who tradition holds was buried here. References to the later history of Molana are sketchy. Interestingly in 1450 Molana was at the centre of a scandal.  Pope Nicholas V compiled a mandate for the investigation of claims that the Prior of Molana John McInery, was guilty of simony, prejury and immorality.

The abbey was granted an indulgence in 1462, by the then Pope Pius II , to all those who came here to pray and to give money to the maintenance of the abbey. Such an indulgence would have made the abbey a focus of pilgrimage for at least the duration of the offering of the indulgence.

The names of some of the later priors of Molana are also mentioned in historical sources.The abbey was suppressed in 1541 and fell into the hands of Sir Water Raleigh. By the 19th century the abbey was in possession of the Smyth family and was a focal point on their estate, with their stunning Georgian mansion looking across at the ruins.

Today the sites consists of a number of ruined buildings  that date to the late 12th /13th century. The buildings included a  church, monastic buildings and a cloister all  built of a red sandstone, which gives the site a lovely warm feeling . There are a number of cracks in the walls so some of these building do not appear to very stable.

The church is  large (17m x 7.6m)  with an undivided nave and chancel . The nave is the oldest part of the building and appears to incorporated part of an  earlier church. The chancel  was a later addition and dates to the 13th century. It has eleven large lanclet windows (tall, narrow windows with a pointed arch at its top) which must have looked quiet magnificent when the church was in use.

The east wall of the church is in a poor state of repair but traces of a decorated  moulded window embrasure still remain.

Decorated moulding of window in the east wall of church

Attached to the north wall of the chancel are the remains of  a two-story building which was probably used as the abbot’s or prior’s accommodation. It has a fine  pointed doorway of dressed sandstone and a spiral stairs.

Building on the north side of chancel of church

At the centre of the ruins is a small cloister (19.65m N-S; c. 14.75m E-W). There is no evidence of an arcade but corbels in the outer walls of the surrounding  buildings suggest a roofed walkway.  Today the cloister is dominated by a  19th century statue which depicts the founding saint.

Cloister of the Abbey

The statue was placed here in 1820 by Mrs Mary Broderick Smyth, the wife of Grice Smyth. A  plaque  on the statue plinth has the following inscription

This statue is erected to the memory of Saint Molanfidhe who founded this abbey for Canon Regular A.D. 501. He was the first Abbot and is here represented as habited according to the Order of Saint Augustine. This Cenotaph and Statue are erected by Mrs. Mary Broderick Smyth A.D. 1820 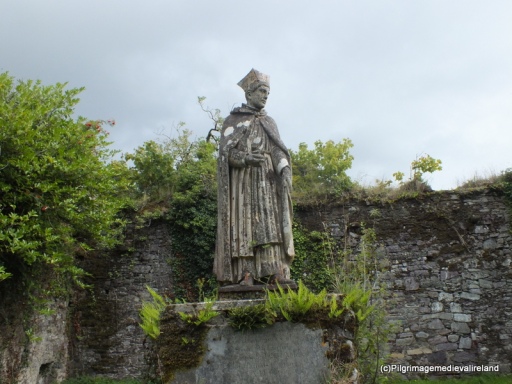 The saint is dressed in a cloak and robe  with a very pretty floral pattern on the hem.

Floral pattern on the hem of the statue 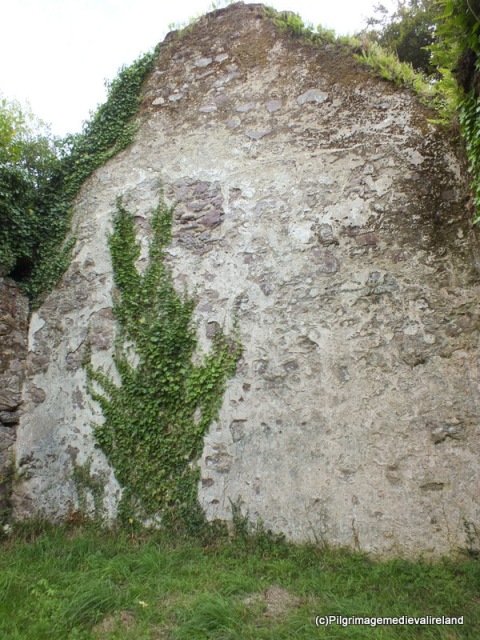 In the same room, a plaque is set into a window embrasure on the south wall. This plaque was also placed here by Mrs Smyth,  and has the  following inscription 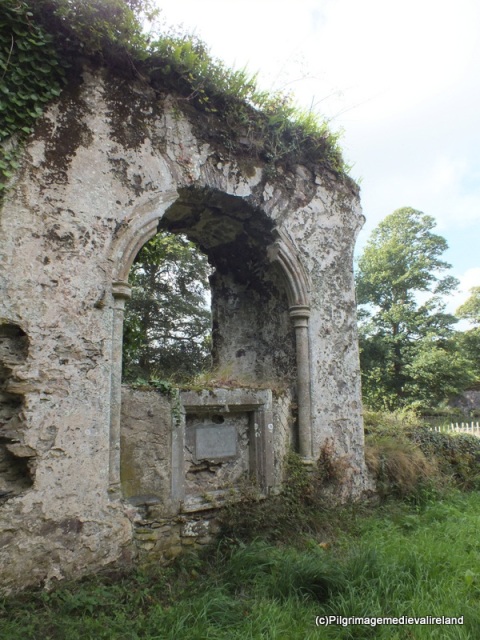 The fascinating  history, architectural remains combined with  the stunning setting all  make Molana a truly amazing, spiritual and peaceful place.