At the moment there are some really exciting community archaeology projects taking place in Ireland. I want to tell you about one project  happening over the next two  weeks  in South Tipperary.  This project  involves the training of local communities  to record   historic gravestones at the old graveyards at Newcastle, Molough Abbey, Shanrahan and Tubbrid.  The  training and mentoring for the project  is being provided by Historic Graves.  As you can see from their  website   http://historicgraves.ie/  Historic Graves have  successfully completed similar project  all over the country.

Today I headed  over to  Shanrahan  graveyard, located  just outside of Clogheen, to see how the project works.

View of Shanrahan Church and Graveyard

Shanrahan is a really interesting place,  at the center of the graveyard are the ruins of a  medieval parish church. The church is unusual in that it has  two Sheela-na-gigs.   Sheelas  are  figurative carvings  of naked   women, usually bald and emaciated, with lug ears,  squatting and pulling apart their vulva.  These carvings are found on medieval church, sometimes castle sites in  Ireland and England. 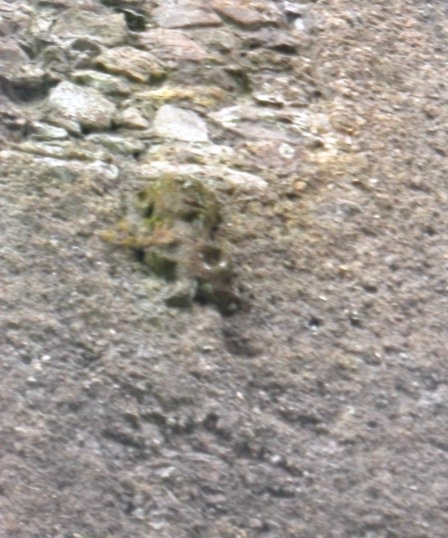 Sheela-na-gig on the church tower.

John Tierney of Historic Graves, kindly brought me on a guided tour and explained how  the recording is   done. I also got to meet the volunteers who were all having a great time  and doing an excellent  job recording the inscriptions.

Volunteers taking a brake for the recording 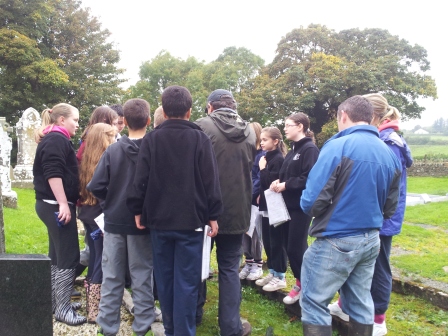 John explaining the recording to the local school kids

The gravestones are numbered, then photographed using a special camera which provides each photo which a geo tag.  This information can be used to produce a plan of the  graveyard.  Next the inscriptions on the stones are recorded. 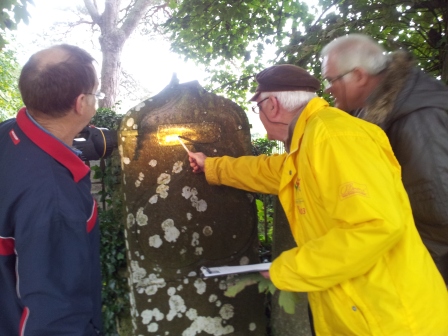 Once the stones  have been photographed and  the inscriptions recorded ,  a rubbing is taken of  each gravestone .

The local  kids  from Clogheen  primary school came along  for a visit and  to help out  with the recording.

Projects like  this are really important. They help  local communities become aware  of the importance of  Irish graveyards. Each stone has its own story and can tell alot about the social  history of the time . The location of graves and style of headstone  can  tell us about class and religious differences .  They provide a record of people who lived in the area , as well as  a record  of  folk art for the 18th – early 19th century. They also provide imformation about the people who made the stones.  Additionally projects like this make people aware of good practice in maintaining and looking after graveyards. This in turn  means they are less likely to engage in bad practice like sandblasting  or cleaning stones with wire brushes which ultimately  damages the stones.

Close up of the angel Gabriel blowing a trumpet

Just  when I thought I was having a pilgrim free day  John brought me to see the grave of Fr. Nicholas Sheehy 1734—1766.  An  opponent to the penal laws, the preist was   hung , drawn and quartered  after he was falsely accused  of  murder.  The candles on the grave and the flowers immediately pointed to people coming to the grave.

The grave of Fr Sheedy

John then pointed out a small hatch or door in the side of his tomb and noted he had seen a similar hatch at priests grave in Cavan also dating to the penal times. 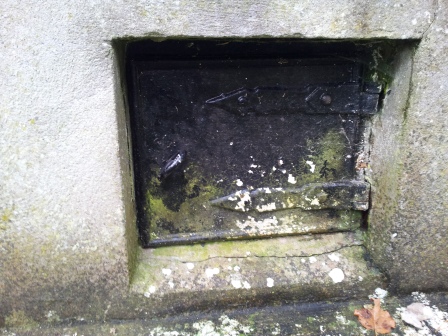 This opening allowed people to remove soil  from the grave within, the soil which was  seen to be holy and have healing powers,  was  take away  to be used for cures. 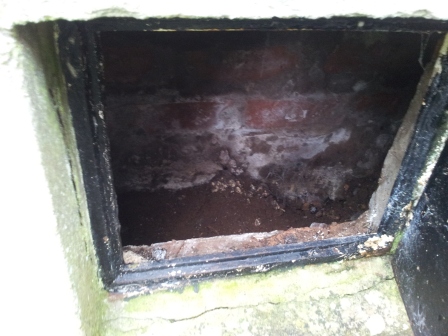 The soil within the tomb

Fr.  Sheehy’s tomb  immediately reminded me of medieval pilgrims who were known to take   dirt/earth from the saint’s grave, or  cloths touch against the saint’s shrines or oil from the lamps that burned at the shrine, home with them. The tradition of healing soil is recorded  in early Greek medicine, where certain soils were seen to have curative powers.   In the medieval world the healing  power of the earth came from the belief that the soil was a type of  relic. Pilgrims believed the earth or dirt from the saints graves had been scantified because of its proximity to the saints body . There are many  accounts of 19th century  and even modern pilgrims  taking  the holy earth from the grave of the saints home with them, to use for cures and protection.  At Ardmore  the soil from St Declans grave was sold to pilgrims in the 19th century, while at  Clonmacnoise the practice of taking earth from the grave of St Ciarán caused the walls of Temple Ciarán to become unstable and lean in. I think this could be a topic for another blog post.

6 comments on “Graveyard Recording at Shanrahan and medieval pilgrim rituals”