About two weeks ago I finally got to visit the beautiful medieval baptismal font at Ballybacon Co. Tipperary. I first came across an article on the font (M. Cahill and E. Twohig, Baptismal Font from Ballybacon Old Church, Co. Tipperary , Journal of the Cork Archaeological and Historical Society , 81, 1976, 92-3, fig.1) when I was doing research for my MA thesis on the Rian Bó Phádraig in 2000. I have always wanted to see the font    in person and after several failed attempts  I finally managed to achieve my goal.

The front panel of the medieval font, showing floral decoration.

The font  is smaller than I imagined but very impressive. It is rectangular in shaped and carved from a single piece of fine grained granite it measures 32cm in height x 58cm wide x 56cm deep. The interior is also rectangular with a central drain hole. All the outside faces of the font are decorated in low relief with circular and floral pattern which is very pretty. The underside of the font has a large circular depression 0.32 m in diameter which could suugest  that it rested on a single columnar base.  Pike (1979, 9) suggests that the font is ‘pre-conquest’ while Cahill and Twohig (1976) date it to the mid-to late- 13th century. Today the font sits on a small wooden table in the modern parish church at Ballybacon. 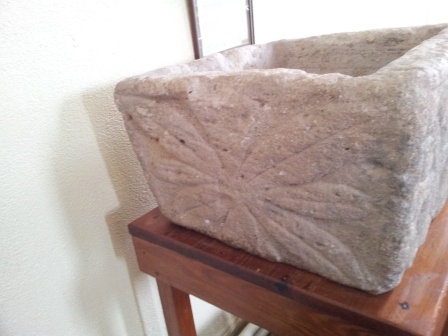 Side panel of the medieval font, showing a floral motif

Originally  the font was located at the nearby medieval parish church of Ballybacon in the townland of Raheen. The church is today covered in ivy it has a simple undivided plan and is aligned E-W, and probably of 13th-century date, built of roughly coursed limestone and sandstone rubble, with a base-batter (Farrelly 2011). 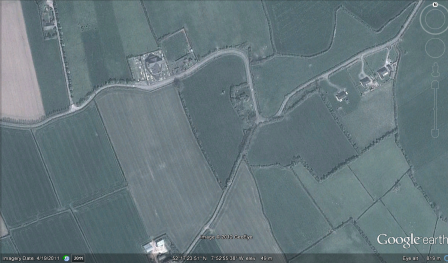 Ballybacon or Baile Uí Phéacháin in Irish means  “O’Peakin’s Homestead”. It is interesting to note that there is a site  dedicated to a saint to St Peacáin/Beagán at Toureen Peakaun (Kilpeacan)  located in the parish of Kilardry, Co Tipperary. It may be possible to speculate that Ballybacon church was originally dedicated to this saint and there was an earlier church here prior to the 13th century.  Tentative evidence to support this idea  is the  presence of a possible early medieval cross slab at the site and the fact that the church is located beside the  townland boundary of Glebe and Raheen. Many early medieval churches were located in boundary positions and the kink in the road beside the site is very curved and may suggest the presence of a circular enclosure. 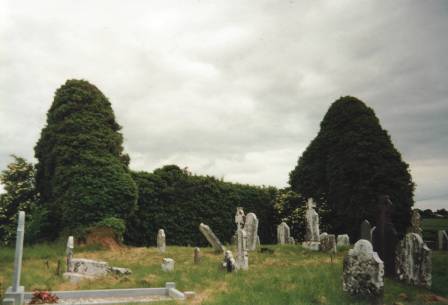 the ruins of the medieval church at Ballybacon.

According to a local man Francis Carrigan the font was removed at some point to a nearby farm where it was used as a tough for pigs.  It was later rescued and returned to the medieval church before it was moved  in 1975 a few hundred yards away to the modern parish church where it resides today.

Power,P. 1937. Waterford and Lismore – A Compendious History of the United Dioceses, Cork, 71.

3 comments on “A quick note on a medieval baptisimal font at Ballybacon, Co. Tipperary”